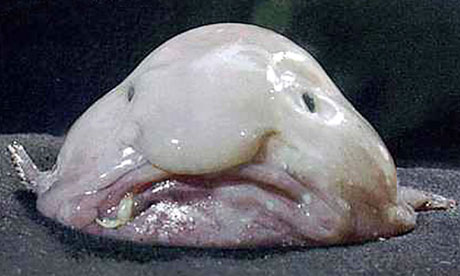 The blobfish (Psychrolutes marcidus), a species that lives at great depths and is rarely seen but resembles a marine Jabba the Hut, has been voted the world’s ugliest animal. More than 3,000 votes were cast in the online competition, with 795 for the blobfish.

The campaign, run by the Ugly Animal Preservation Society to decide its new mascot, was set up to raise awareness for endangered and aesthetically challenged animals. With 200 species becoming extinct every day, it says ugly animals need more help because of their less than “pinup” appearance.

Simon Watt, the society’s president, said: “We’ve needed an ugly face for endangered animals for a long time and I’ve been amazed by the public’s reaction. For too long the cute and fluffy animals have taken the limelight, but now the blobfish will be a voice for the mingers who always get forgotten.”

The other animals voted into the top six from 11 nominations were:

• the kakapo, a giant flightless parrot from New Zealand that is often in danger from predators because of its overly curious nature;

• the axolotl, a salamander that can regenerate its own limbs and is said to never grow up;

• the Titicaca water frog (Telmatobius culeus), named after the South American lake where it lives, dubbed the “aquatic scrotum frog”;

• the proboscis monkey. With a rather large nose which is said to be attractive to its mates, it also has a very bloated and gassy stomach caused by its love of eating unripe fruit.

The campaign consisted of 11 “election” videos, with comedians championing each ugly species. Paul Foot, of Never Mind the Buzzcocks, supported the blobfish.

The species, which lives off the coast of south-eastern Australia and Tasmania, is under significant threat from fishing trawlers that accidentally capture it in their nets. “Some would describe it as a bit ugly, but I think the sad face of the blobfish belies a kind and very wise little brain in there,” said Foot.

The YouTube videos for the ugly animals have had around 88,000 views in total.

This article was written by Natalie Starkey for the Guardian UK.

I really can’t see how the Kakapo can be seen as one of the ugliest animals…. Especially to me, ex parrot breeder!! 😉