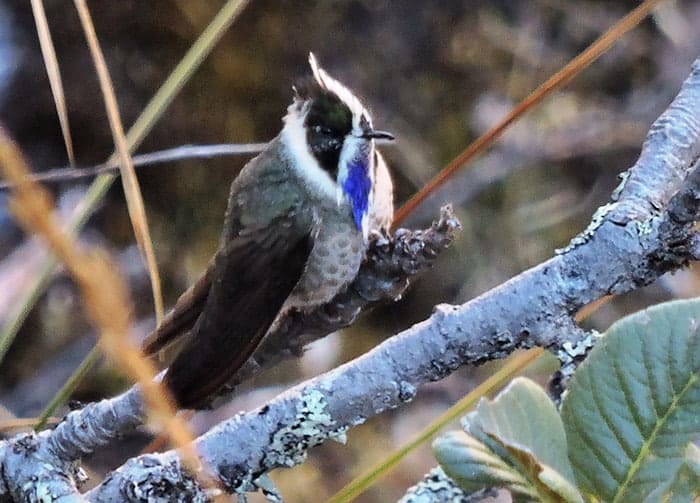 Long thought to be extinct, the blue-bearded helmetcrest (Oxypogon cyanolaemus) – one of the world’s rarest hummingbirds – has been caught on camera for the first time.

Discovered in 1880, the blue-bearded helmetcrest is a medium-sized hummingbird endemic to the mountains of the Santa Marta region of northeast Colombia.

The bird is about 12 cm in length. It has prominent crest and elongated throat feathers forming a beard.

Crest is mostly white, and obvious white frame for the face extends from the rear of the head, around the ear coverts and down to the breast side. In the center of the beard are metallic purplish-blue feathers, and the tail has an extensive buff-white area on the outer tail feathers.

The species is known only from 62 museum specimens. The most recent were collected in 1946 byMelbourne Armstrong Carriker, Jr., one of the outstanding ornithological collectors and explorers in the Neotropics.

Surveys of the Santa Marta massif during 1999-2011 have failed to record the species. Extensive burning and overgrazing has severely degraded its high altitude habitat, and any remaining population is inferred to be very small.

For these reasons, IUCN and BirdLife International in 2014 classified the species as Critically Endangered (Possibly Extinct).

“On 4 March 2015, during surveys of fires in high elevations of the Sierra Nevada de Santa Marta some 14 hours by foot above ProAves’ reserve, Carlos Julio Rojas saw a small bird move quickly past him and perch on a bush nearby,” the scientists wrote in a paper published in the Conservación Colombiana, the Journal of the Fundación ProAves.

“I saw the flash of a bird screeching past me and saw it perch on a bush nearby. I managed to take a quick photo of it before it flew off. I then reviewed the photo on the camera screen and immediately recognized the strikingly patterned hummingbird as the long-lost blue-bearded helmetcrest – I was ecstatic!! After reports of searches by ornithologists failing to find this spectacular species, Christian and I were the first people alive to see it for real,” Mr Rojas said.

“We then decided to set up camp and for the next two days conducted observations around the area. We documented a total of three individuals of the helmetcrest within three tiny scattered patches of habitat on steep hillsides and surrounded by the remains of burnt vegetation, all in an area of less than 10 ha,” they wrote in the paper.

“Oxypogon hummingbirds are typically closely associated with Frailejon plants (Espeletia). The sole endemic Frailejon species in the Sierra Nevada, Libanothamnus occultus, was sparsely present where we saw the hummingbird, with none in flower at this time. There were few surviving flower shrubs or plants where we located the species, but we did document and photograph feeding on four herbaceous and shrub flowering plants that are presently being identified.”

“Individuals clung to vegetation while feeding and also hovered. All were totally silent during periods of perching and feeding. However, a flight call broadly reminiscent of the green violetear (Colibri thalassinus) was heard during prolonged direct flights across larger distances. Unfortunately, we were unable to make sound recordings of vocalizations.”

The scientists added: “the blue-bearded helmetcrest is a highly distinctive species in its plumage and no other species in this genus is expected at the observation locality high in the Santa Marta mountains. There can be no doubt as to the identification based on the photographs presented, and that this long-lost species has finally been found.”

This article was first published by Sci-News.com on 19 Mar 2015.