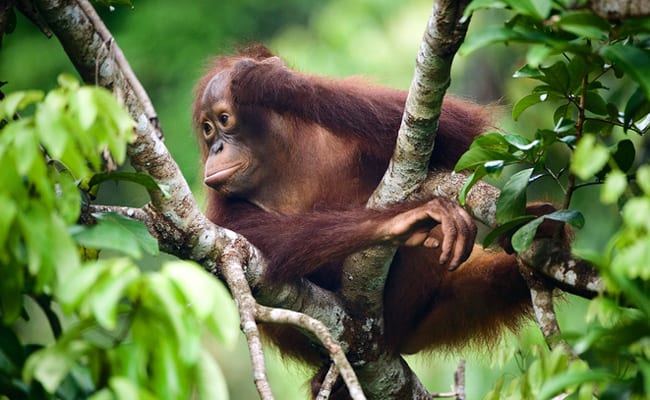 Conservationists have worked to secure the survival of critically endangered Bornean orangutans, but researchers have found they’re still declining at an alarming rate and have lost about half their population in less than two decades.

According to a study published in the journal “Cell Biology“, which drew on field survey data collected from 38 research organizations, nearly 150,000 Borneo orangutans were lost between 1999 and 2015, which is roughly half their population.

Now, of the 64 orangutan communities in Borneo, only 38 are made up of more than 100 individuals, which is the minimum number needed to ensure their long-term survival.

Sadly, these amazing great apes continue to face a number of threats. These range from being hunted for bushmeat and having infants stolen for the pet trade, to being robbed of their forest homes as land is lost to palm oil and rubber plantations, agriculture, development, logging, mining and fires.

The decline in habitat is a big problem, leading to starvation for many, and has increased the risk of violent conflicts with humans as the orangutans move closer to us in search of food. In recent weeks, heartbreaking stories about brutal killings have made international headlines, and researchers fear these killings, whether they’re a result of poaching or conflict, are a major cause of the species’ decline.

“The decline in population density was most severe in areas that were deforested or transformed for industrial agriculture, as orangutans struggle to live outside forest areas,” said the study’s lead author Maria Voigt of the Max Planck Institute for Evolutionary Anthropology in Germany. “Worryingly, however, the largest number of orangutans were lost from areas that remained forested during the study period. This implies a large role of killing.”

Although these killings may be happening on a small scale, they’re having a major impact. Orangutans grow and reproduce slowly, so losing even one individual in their community can have serious consequences.

“The one thing they cannot cope with, however, is the high killing rates seen currently,” said co-author Serge Wich of Liverpool John Moores University. “Orangutans are a very slow breeding species, and models used in previous studies indicate that if only one in 100 adult orangutans is removed from a population per year, this population has a high likeliness to go extinct.”

Researchers predict that another 45,000 could disappear in the next 35 years due to habitat loss alone, and while organizations like International Animal Rescue are on the ground working to save those in need and educate the public about the plight of orangutans, researchers believe stronger measures need to be implemented to protect forests and stop killings in the first place. That’s going to take the interest and involvement of local communities, companies that are managing orangutan habitats, and governments, but with enough support, orangutans could rebound.

“In terms of conservation it is key that the message of our paper is taken up by the Indonesian and Malaysian conservation authorities, and that proper strategies are developed that really address the current population declines,” said Erik Meijaard, Adjunct Professor at the Center of Excellence for Environmental Decisions and the University of Queensland and Director of Borneo Futures in Brunei. “The timing is good. Both countries are developing new long-term action plans for orangutan conservation.”

Orangutans are currently only found in the rainforests of Borneo and Sumatra, this greatly implies that there is a strong need for conservation. Their slow breeding rate makes it even more difficult for continuity as such Orangutans should not be hunted, instead their life continuity should be encourage and extinction fought.