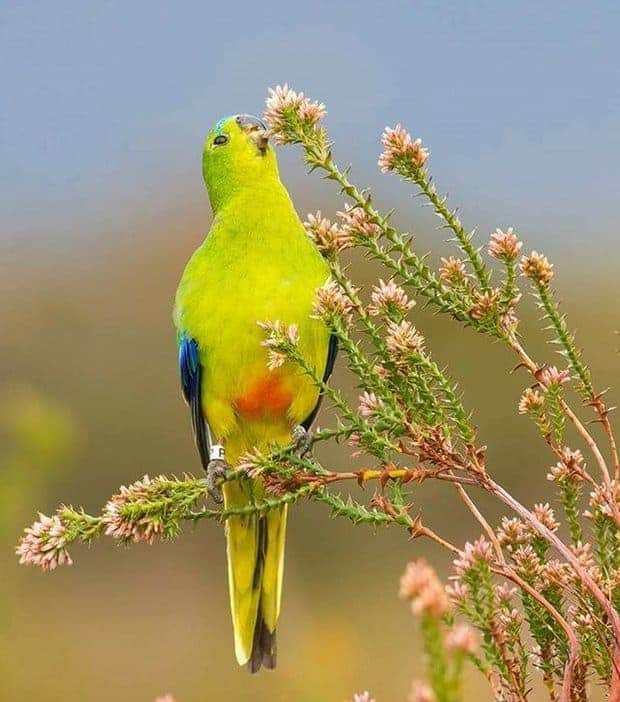 This summer, I’ve been glued to my phone, awaiting every Twitter notification. But what I’m following is happening in Tasmania’s Southwest Wilderness World Heritage Area, far from celebrities, politics or online trolls. I am watching a succession of videos portraying the wiggling, fuzzy, yellow-beaked bodies of the next generation of orange-bellied parrots.

These striking birds are one of only two species of parrots that migrate. They winter on coastal swamps in South Australia and Victoria (including at Werribee, on Melbourne’s doorstep), then cross Bass Strait to breed in southwest Tasmania every summer.

For the past five years, around 25 orange-bellied parrots (known as OBPs) have returned to Tasmania to breed – precariously low but consistent numbers. Captive-bred birds have been added to the wild population for the last three years, though many seem to breed then disappear without trace.

But last spring, to our horror, the number of arrivals stopped at 16. The sum of Australia’s most endangered bird was three females and 13 males. And since breeding is what OBP conservation is all about, in effect there were a mere three pairs left in the world.

When a person will otherwise die, “heroic measures” are sometimes performed. The orange-bellied parrot now needs them. It’s somewhere between shuffling off this earth and being given extraordinary treatment to stave off extinction.

Happily (and here’s where Twitter enters the story), a brash, young team of scientists from the Australian National University have come up with a proposal: a lifeline of sorts.

Acting immediately the crisis was confirmed, they launched a crowdfunding campaign to support an “emergency intervention” at the Melaleuca, Tasmania, breeding grounds. Attempting to increase breeding, their plan is to manage nests intensively, inspect them daily, weed out unviable eggs, take eggs from captive-bred birds and sneak them into wild females’ clutches, and even help struggling chicks with a spot of hand-rearing.

The campaign broke records, with over $140,000 donated. It was as if an enthusiastic public was just waiting for a way to help, to back anything that offered hope to lift the OBP out of the mess it’s in.

Conservative politicians have called it a “trumped-up corella” and “an imaginary parrot” and it’s still the poster bird for greenie-bashing in some quarters, but concern for the orange-bellied parrot’s future is clearly abundant. More than 1,600 people gave their dosh, all for a bird that most will never see.

The ANU researchers have now begun “Operation OBP”. They’re at Melaleuca, hoisting themselves up trees furnished with nest boxes (there’s a shortage of natural nest hollows) and inspecting what’s within: parrot mothers brooding eggs; tiny, ugly, fuzzball chicks fighting for warmth in the middle of a baby-parrot pack.

Then, they’re filming and photographing what they find. The only humans to have ever seen such things have been other researchers. Now, we all can.

What’s brought about this timely, unprecedented access to their most private moments? The answer is of course, the internet.

Social media platforms are where many threatened species teams inform, educate and raise awareness. In the case of the OBP, I’ve administered a Facebook page called “Save the orange-bellied parrot” for six years, posting details of summer breeding and winter sightings to a keen readership. With 18,500 likes, some posts reach over 70,000 people. Turns out, a great many all over the world care about this little green bird.

But relying on the tidings of fieldworkers reporting to the orange-bellied parrot national recovery team, news was often weeks-old. With Melaleuca so remote, this time lag was inevitable: there are no roads in, access is predominantly by small chartered plane. Smartphone cameras have long been used, but relaying anything was hitherto slow.

This year, internet access at Melaleuca has changed everything. Thanks to Dr Dejan Stojanovic and the ANU team, anyone can view the family life of Australia’s most endangered bird. The chicks are little scraps of heaven; their mothers look fetchingly vague, or possibly blissed-out. Brooding females “go cross-eyed and off their food”, according to Holdsworth. Look up Stojanovic’s Twitter account, @teamswiftparrot, and there they are, not even batting off the ants.

Fragile, gravely endangered, yet breeding for their lives … it’s enough to give the most hardened science types a lump in the throat. Ironically, our closest access to orange-bellied parrot breeding comes at a point in their history when they have declined to almost nothing. How this came to be is irrelevant, for now.

Later this month, before the nestlings learn to fly, they’ll be weighed, have blood sampled for DNA analysis and given unique legbands to aid identification. There will be other strategies trialled. What happens next is anyone’s guess.

In the meantime, I’m riveted to an unfolding drama. Is this the twilight of a much-loved species or the beginning of a revival?

This article was first published by The Guardian on 06 Jan 2017.

Have you ever thought it might be down to wind-farms?