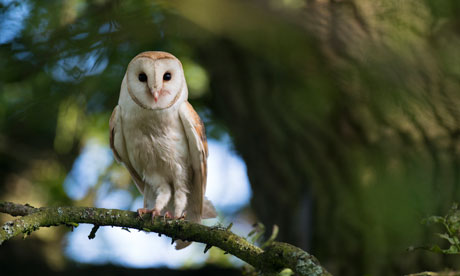 The barn owl, an icon of the countryside and one of Britain’s most popular farmland birds, has suffered a catastrophic fall in numbers after a series of cold and wet springs and is now in “very serious trouble”, conservationists have warned.

The Barn Owl Trust said a run of extreme weather events since 2009 had devastated the species’ UK population and led to the worst barn owl breeding season for more than 30 years. Monitoring of sites has revealed where birds have managed to breed, and the average number of owlets at each site is just two, compared with the four or five needed for population recovery.

The British Trust for Ornithology (BTO) recorded a 280% increase in reports of dead birds in March at the start of the breeding season. Many had starved.

David Ramsden, senior conservation officer at the Barn Owl Trust, said: “There has never been mortality on this scale before.” Numbers were already low because of the bitterly cold winters and extremely wet summers the UK has experienced since 2009.

In 2012, hopes of a good breeding season were high, until the heaviest rainfall for the month of June since records began in 1910 was recorded. The final blow came earlier this year when Britain experienced its worst March snowfall in more than 30 years.

Ramsden said: “Barn owl mortality usually peaks in February and then things improve. But in March this year mortality just kept increasing and by the end of the month huge numbers were dead.

“In 2012 our hopes were high. Fantastic weather in March 2012 meant that the owls started breeding earlier and by late May we were finding nests with as many as seven well-grown owlets. Then in June it all went horribly wrong. The rain started and just didn’t stop. This prevented the adults hunting and many young birds starved. In some cases, we found entire broods of beautiful owlets dead in the nest.”

Barn owls, which can be seen hunting in daylight, hunt in fairly long grass, which means that their feathers become waterlogged in heavy rain and they have difficulty drying off. Wet weather also had an adverse effect on the vole population, the barn owl’s main prey.

Of 73 sites monitored annually by the trust in Devon, only 12% had nests, compared with an average of 51% previously. Where owls had bred, the average number of offspring was only two rather than the four or five required for population recovery.

Across Devon 1,234 sites are monitored every 10 years, and out of 276 sites checked so far, barn owls are nesting in seven, and only four sites have young. The Shropshire Barn Owl Group usually has around 36 nests, but this year it has found only four, and the West Sussex group normally has up to 55 nests but only five have been found this year. Ramsden said that groups across the UK, including in Lincolnshire and Dumfries and Galloway, had encountered similar conditions.

Between 1932 and the 1980s the barn owl population was thought to have declined by 70% because traditional nest sites such as mature trees and agricultural buildings were lost. But since the 1980s, their numbers had been steadily increasing. The most recent figures put the UK population at an estimated 4,000 breeding pairs.

Jeff Baker, of the BTO, said that recovery of the barn owl population was mainly due to a successful artificial nest box scheme.

“Like most birds that have suffered seemingly quite catastrophically in bad winters and poor springs, they can bounce back unless there are poor springs over the next three or four years, which could really seriously impact.

“They can certainly sustain one or two years of a poor breeding performance, but we don’t want another very cold spring, or very wet one.”

This article was written by Caroline Davies for the Guardian UK.