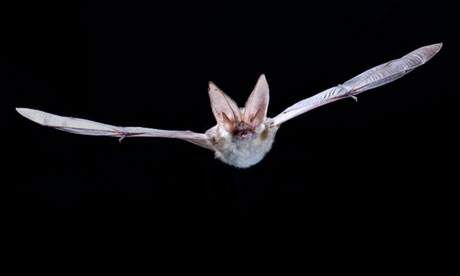 The sky darkens to pale grey and from a crack in the eaves of a Victorian villa perched on a slope above a west country river a dozen or so of one of Britain’s rarest mammals spill out. Leaving the house, one by one, these grey long-eared bats veer sharply into the yew trees and holly bushes and are off for an energetic night hunting moths, crane flies and beetles above the meadows and marshes.

But a study published on Monday shows how rare a sight this is. Only 1,000 grey long-eared bats are thought to remain in the UK and the numbers are continuing to decline.

Plecotus austriacus is confined to small pockets along the south coast of England, including the Isle of Wight. A few of the mammals are also living in the Channel Islands and south Wales.

Conservationists are worried that the breeding colonies are so fragmented the bat could become extinct unless more work is done to protect it and the habitats it needs.

One of the few areas where the species can be viewed in action is close to the banks of the river Teign in Devon. Here between 20 and 30 adult female grey long-eared bats live in an attic in the villa (the males are to be found in temporary roosts elsewhere) while as many as 250 lesser horseshoe bats occupy a neighbouring roof space.

Orly Razgour, who carried out the research, and who studied the grey long-eared bat for her PhD at Bristol University, said: “The two species live in perfect harmony. This is one of the best and strongest colonies of grey long-eared bats, but the population is very fragile. Unless we do more to protect them they may die out completely.

“The problem is that the bats’ hunting habitats are vanishing and colonies are becoming ever more isolated. Intensive farming over the decades has meant that the lowland meadows and marshes the bats favour are harder to find.”

Though the nearest colony to this one is only about 20 miles away – within a bat’s range – the lack of suitable habitats in between the two sites appears to dissuade the bats from making the journey. Razgour established there was no genetic connection between the groups.

She said she was shocked when she discovered there were so few grey long-eared bats remaining and is calling for them to be afforded “UK priority species” status.

The visit to the Devon site is rewarded first by the lesser horseshoe bats flying out from the villa. A bat monitor picks up their distinctive melodic warbling echolocation call.

“It is a magical sound,” said Carol Williams, from the Bat Conservation Trust, which backed Razgour’s research and her call for the bats to receive more help.

Another monitor tuned into a lower frequency detects a much softer set of clicks. “That’s the long-eareds just warming up in the attic ready to fly,” said Williams. “They exercise before they emerge.”

Yet another problem the bats face is the paucity of such perfect roosting conditions as these. They need large open spaces to stretch their wings before heading out, and modern buildings do not tend to have such areas and may, anyway, not be accessible.

Their echolocation call is very quiet for good reason. “It’s how they creep up on the moths that would be aware there’s a bat out there,” said Williams, “It’s why this bat is sometimes nicknamed the whispering bat.”

Having warmed up, the bats leave the attic and head for their hunting grounds. They are larger than the lesser horseshoes and their ears are nearly as long as their bodies. When at rest they curl their ears back like ram’s horns or tuck them out of sight.

They spend the night hours chasing moths, flies and beetles in the meadows to feed their hungry youngsters back home in the attic.

“It’s a wonderful sight,” said Williams, “We have to make sure we do more to protect this fantastic species.”

This article was written by Steven Morris for the Guardian UK.