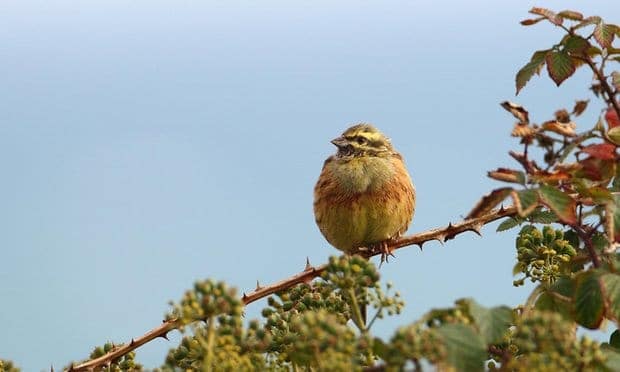 One of Britain’s most threatened farmland birds has reached a major milestone in its recovery from the brink of extinction, figures show.

A nationwide survey by the RSPB shows the UK population of the cirl bunting – a small, finch-like bird – has reached 1,078 pairs after numbering just 118 in 1989.

The RSPB said the dramatic rise is the result of a 25-year project recovery programme between the organisation, Natural England and local farmers in the south-west of England to help manage their land in order to provide year-round food supplies and habitat for the cirl bunting.

Under the initiative, farmers took up country stewardship schemes which provide financial incentives for making nature-friendly choices. These ranged from leaving crops to go to stubble after harvest and provide seed food during colder months to planting grass margins at the edge of fields to support habitats for insects and spiders that would act as a summer food source.

Many other birds have benefitted from the effects of the project, including linnets, skylarks and yellowhammer, which are all known to gain from a boost in stubble winter food sources.

Martin Harper, RSPB conservation director, said: “The recovery of this charming little bird is a remarkable conservation success and shows what can be achieved when farmers and conservationists work together for nature. To go from being on the brink of extinction to have over 1,000 pairs in just 25 years – bucking the overall downward trend for most farmland birds – highlights how effective this project has been.”

He added: “Without this action the cirl bunting would have almost certainly disappeared from our shores altogether.”

Cirl buntings were once common and widespread across much of southern England but suffered huge declines when their food sources and nesting sites were lost due to changes to agricultural practices in the 20th century.

The majority of the UK population remains confined to the fields and hedges of Devon, although the first successful reintroduction programme has established numbers in Cornwall, with 65 pairs according to the latest survey. The RSPB said it expects numbers to continue to grow and hopes the species will return to more of its former areas.

But the good news for the cirl bunting comes at a time when other farmland birds continue to struggle. The number of farmland birds in the UK has declined by 54% since 1970, according to the State of Nature 2016 report, with 19 species suffering a 48% decline since 1970.

This article was first published by The Guardian on 17 Nov 2016.