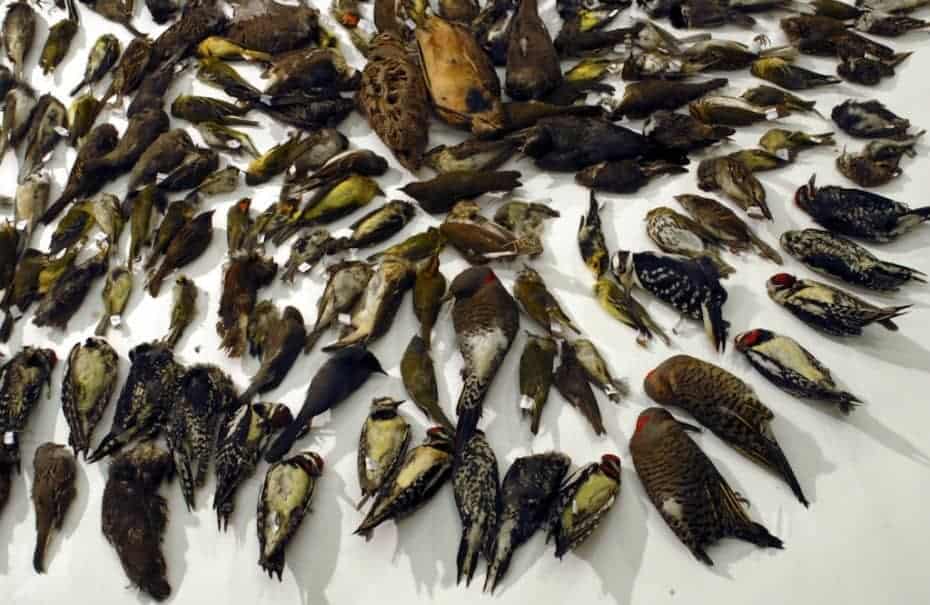 As we await a verdict in the first trial of a building owner over bird collision deaths, a second trial over the same issue has just begun in Toronto. Cadillac Fairview Corporation, the owner of three office buildings in the city, has been charged with violating Canada’s Species at Risk Act. The company has pleaded not guilty.

The charges are being brought in a private prosecution by Ecojustice, a Canadian non-profit environmental law firm. The Toronto-based non-profit Fatal Light Awareness Program (FLAP), which works to document and prevent bird collisions with buildings, estimates that the complex is among the most lethal in the city. Ten birds in two species – Canada Warbler and Olive-sided Flycatcher – were killed at the Yonge Corporate Centre buildings and are listed as Threatened under the Canadian Species at Risk Registry. The charges also allege that an additional 800 birds were killed at the complex in 2010.

The highly reflective glass of the deadly buildings mirrors nearby trees and the sky, which likely leads birds to mistakenly fly into the windows and be killed or injured.

The Guide will be especially helpful to architects, planners, building owners and regulators and is available at www.abcbirds.org. ABC also has helped design classes eligible for American Institute of Architects sustainable design credit, to instruct architects on how to design beautiful buildings that are also safe for birds.

A verdict is pending in the first trial, against Menkes Developments and related companies who are the owners of the Consilium Place complex (three office buildings) who were charged under Canada’s Environmental Protection Act with discharging a contaminant – light reflected from the glass – that causes harm to animals.

In addition to possible fines under that law, the Menkes companies also face a maximum fine of $60,000 under the Ontario Society for the Prevention of Cruelty to Animals Act for causing birds to be in distress.

Ecojustice and Ontario Nature brought the charges in the first case, claiming that the buildings, whose exterior faces are almost entirely glass, are responsible the deaths of about 7,000 birds in the last decade, making them the most deadly in the entire Greater Toronto area.

Almost 30,000 birds were documented to have been killed by such collisions in Toronto between 2000 and 2010, according to FLAP, but estimates suggest the actual toll may be closer to one million.