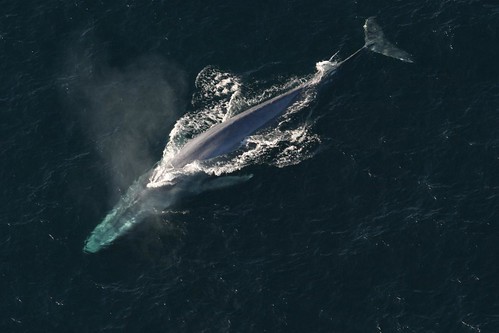 In addition to the amazing revelation that whales have earwax (!!), we learn that a team of researchers in the United States just published a paper detailing a new method that they developed for measuring a whale’s lifetime exposure to a wide variety of chemicals — by studying their earwax. In this study, the team examined the earwax plug removed from an individual male blue whale, Balaenoptera musculus, that died after a ship strike. The team counted the layers in the earwax and determined the animal’s age — just like counting growth rings in the cross section of a tree trunk.

The team then chemically analysed the layers of the earwax plug to reconstruct, with a 6-month resolution, the fluctuating concentrations mercury and organic pollutants in the whale’s environment. Using their new method, they also measured the hormone levels circulating in the whale’s bloodstream. Not only did the team measure the amount of pollutants and hormones transferred to the whale from its mother whilst it was in utero, and confirm the age of sexual maturity in this species, but they also measured the amount of the stress hormone, cortisol, and found that this individual’s stress levels doubled over its lifespan. This new technique promises to fundamentally transform scientists’ ability to assess human impacts on whales and their ecosystems.

Below the jump, I share more details about this study and why it is so important.

Of course, when I emailed the study’s authors, I had to start by asking them the obvious question: what does whale earwax look like?

It’s “brownish/yellow, much like human cerumen”, wrote Stephen Trumble in email. Co-author of the newly published study of whale earwax, Professor Trumble is an assistant professor of Biology at Baylor University in Waco Texas.

But it differs from human earwax, too.

And of course, “it smells fishy.”

Blue whales, Balaenoptera musculus, are the largest animal to ever have lived on Earth, but thanks to whaling, humans have driven them to the point of extinction. Currently, the greatest threats to these animals are ship-strikes, entanglement in fishing nets, and climate change. It’s estimated that there are roughly 5,000 and 12,000 individual blue whales alive today, but they are very rare and seldom seen. Which raises the question: how can we learn about these animals’ lives and habits and how our behaviour impacts them?

“We were working on another project looking at contaminants in whale blubber when [a student] asked how to age a whale”, said Professor Trumble.

Thanks to decades of whaling records, scientists know that many species of large baleen whales accumulate layers of cerumen in their ear canals, beginning at birth and continuing throughout their lives. Composed of lipids, waxes, and keratin that accumulate continuously, this ear wax forms an earplug that is retained in the auditory canal for the animal’s entire life.

“Earplugs have been used for over a century as a tool to age whales.”

Although blue whales are the largest animal to ever live on Earth, they are filter-feeders, dining almost exclusively on swarms of krill (euphausiids) — tiny marine crustaceans that look like shrimps and are roughly the size of a jelly bean. A blue whale captures swarms of krill by engulfing a swimming pool-sized gulp of water in its mouth. The whale then squeezes the water out of its mouth uses its powerful tongue. Curtains of baleen sheets (consisting of keratin, just like human fingernails) on the upper jaw act as sieves to prevent krill from escaping so the whale can swallow them.

Although their prey is tiny, blue whales make up for this by eating vast amounts: one feeding blue whale consumes an average of 40 million krill (8000 pounds or roughly 3600 kilograms) every day!

Since they need to eat so much each day, blue whales’ movements through the world’s oceans are largely driven by the distribution of krill. After spending the winter in their warm-water calving areas, blue whales migrate towards the icy poles where krill are concentrated where they feed all summer long. During migration, which can last as long as 4 months, the whales generally live off their body fat.

The physiological demands of this life history alternation between migration and feeding is captured in the colour and chemistry of their earwax: in cross-section, the earplug has alternating dark- and light-colored layers (laminae) — similar to tree growth rings.

For this reason, Professor Trumble wondered if whales’ earplugs might reveal other sorts of information, such as the changing concentrations of hormones circulating in their bloodstream or perhaps even the chemicals that these animals are exposed whilst moving through the world’s oceans.

Professor Trumble chatted about these possibilities with a colleague, Sascha Usenko, assistant professor in Environmental Sciences at Baylor University. Professor Usenko is an environmental forensic chemist who identifies contaminants from their unique chemical fingerprints.

Professor Usenko was fascinated to learn that over their entire lifespan, many whale species accumulate layers of wax in their ear canals, which are sealed from the external environment.

“[A]fter it was determined that the plug is laid down throughout life and in layers, we decided that this may mean that lipophilic chemicals may be archived in these layers”, explained Professor Trumble in email.

Professors Trumble and Usenko passed their ideas past Charles Potter, Collection Manager of Vertebrate Zoology at the Smithsonian Institution’s National Museum of Natural History, and then, together with Michelle Berman-Kowalewski, Associate Curator of Vertebrate Zoology at the Santa Barbara Museum of Natural History, and Professor Usenko’s graduate student, Eleanor Robinson, the team went to work.

After two years of work, the team developed a methodology that worked, and an earwax plug was donated to this study.

This earplug was harvested from a male blue whale that washed up near Santa Barbara California in 2007 after it had been killed by a ship-strike (figure 1):

The earwax plug was sectioned and the team counted 24 laminae, so they estimated the whale’s age to be 12 years, give or take six months (figure 1D). This estimate was congruent with length-to-age data that are commonly used to estimate age of blue whales.

“You have to cut it in half, shave off layer after layer, do a lot of lipid extraction,” said Professor Trumble. “It’s not easy; it’s very tedious.”

The team quantified the whale’s hormone concentrations (cortisol and testosterone; figure 2A). They found that shortly before this whale was killed, its concentrations of the stress hormone, cortisol, increased by a whopping eight hundred percent over the initial baseline (45.5 pg/gm at 6-12 months of age compared to 420 pg/gm at 114-126 months of age). Since this huge increase in cortisol occurred shortly after a peak in testosterone (400 times greater than baseline), the authors interpreted this as increased stress as the animal responded to the environmental, chemical, physiological and social factors associated with the onset of sexual maturity.

But how accurate are these estimates when compared to findings estimated from the traditional source, whale blubber? The team compared the accuracy of chemical estimates from earwax at 72-78 months of age (lifespan midpoint) against those estimates from blubber in the same animal (figure 3):

The team identified striking similarities between estimates obtained from earwax and blubber, although blubber only provided cumulative lifetime estimates whereas earwax revealed changes in exposure by 6-month increments.

“We found contaminants are offloaded during lactation to the calf, stress hormones continued to increase over the life of this whale, sexual maturity in this animal was chemically verified to be around 9 years old, and stress increased following sexual maturity”, said Professor Trumble about the study’s findings.

As a result of this study, the team reports:

“There are many aspects [of this research] that are exciting; for one, the methodology that was developed was successful”, said Professor Trumble in email.

When asked about potential future applications for their newly developed methodology, Professor Trumble was enthusiastic.

“We will continue to acquire earplugs from the museum holdings (some have been collected from the 1950’s) and determine differences in chemical exposure and lifetime stress”, said Professor Trumble.

This new method will provide conservation biologists with a clearer picture of the life history of blue whales.

“To be able to profile chemicals over the entire life of a free-ranging whale is amazing; to put this in context, one would have to collect samples every six months from the same animal over the lifespan of the animal. Just can’t be done, logistically or financially.”

Of course, it is now possible to track changes in different blue whale populations back to specific environmental events, such as oil spills they may have been exposed to in certain regions of the world.

Since this method can estimate a timeline with a 6-month accuracy, and considering that blue whales are estimated to live for at least 80 years or more, analysing earwax plugs could provide a fascinating glimpse at the changing concentrations of man-made pollutants and other fat-soluble chemicals back through time — with a 6-month accuracy.

“Obtaining plugs from the 1960’s that come from a whale that is 30-40 years old will provide a look into what the world’s oceans were like pre-WWII etc.”, said Professor Trumble.

“There are countless questions to ask.”

This video interview with several of the study’s authors was just uploaded by Baylor University:

This article was written by GrrlScientist for the Guardian.