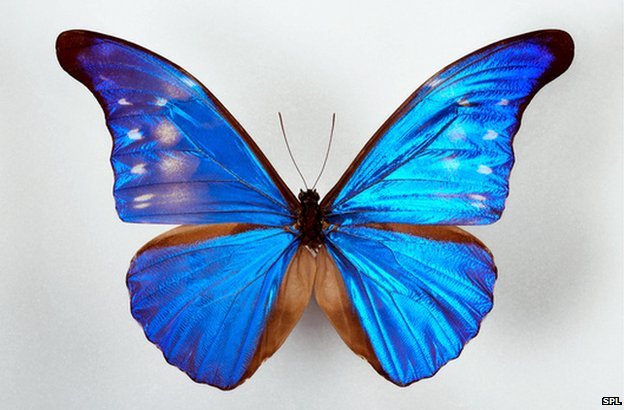 A tropical butterfly might not be the first place to look when seeking inspiration for the latest bomb sniffing technology for the US military, but the brightly coloured iridescent wings of a blue morpho provides one example of a promising branch of science – bio-inspiration.

An exhibition called the Invisible Garden at the Royal Horticultural Society’s Hampton Court Flower Show is enthralling visitors with its displays of the microscopic world in gardens.

“Oh wow!” cried one six year old school girl as she squinted into an optical microscope at the wings of a blue morpho. “It’s really shiny. It’s a really pretty one, that.”

He was right about the scales. Lepidoptera is the Latin name for butterflies, which means “scaly wing”.

But when an electron microscope is used to zoom in to the nano-structure of the wing scales themselves, a new world is revealed. This is what is inspiring scientists, like Professor Peter Vukusic, an optical physicist, at Exeter University.

“They are aesthetically beautiful,” he said, “But scientifically, from the perspective of the physics which underpin the colour, they are hugely interesting. They are complicated. They are adapted to serve a set of complicated functions. The optical ingenuity that’s responsible for the appearances which we see is tremendous.”

At the nano scales revealed by an electron microscope there are structures which can only be described as Christmas Trees, standing up from the surface of the wing scale in long lines.

Made of chitin, these Christmas Trees are just one micron high – one thousandth of one millimetre.

The iridescent effect, which changes according to the angle of vision, is produced by light reflecting off the different structures in the Christmas Trees, rather like the effect of light on a soap bubble.

This is known as structural colour, which is not produced by pigments.

Professor Vukusic and some of his colleagues have been at the forefront of these discoveries. “I remember 15 years ago sitting and marvelling at this, realising at that time that I and my colleagues were some of the first to really look at this from a physicist’s perspective,” he says.

“We shone a laser through a single one of those wing scales and we saw a wonderful diffraction pattern produced. I had goose-bumps along the back of my neck because no-one had done that previously. It gave rise to a depth of understanding of how the system works which was unparalleled at the time. It was a life changing moment.”

Professor Vukusic and his colleagues have gone on to examine many other butterflies, moths, beetles and seeds, all of which have structural colour.

But it is more than just scientific curiosity.

The structure which gives the beetle Cyphochilus its extraordinary whiteness is contributing to the development of a type of super light white paper.

The shimmering green surface of the Margaritaria nobilis seed (common name – the bastard hogberry) has inspired scientists to design a fibre which changes colour as it is stretched. As tension is applied to the thread it changes from red to green and then yellow. The colour is determined by the thickness of the nano-structures.

This has great potential for use in micro-surgery. A surgeon operating remote equipment would know exactly how much tension to apply to surgical thread by observing the colour change.

Other more well-known examples of bio-inspiration include Velcro, which was invented by Swiss engineer George de Mestral who returned from a walk with his dog in 1941 and noticed the burdock seeds caught in his dog’s fur. On closer inspection the seeds had hooks on them which attached securely onto the loops in the fur.

The way water runs off a lotus leaf is due to the rough nano structure of the plant’s surface. Water forms droplets and rolls off, inspiring the invention of self-cleaning glass, which is cleaned when rain rolls off collecting dust and dirt as it goes.

But for perhaps the most unlikely example of bio-inspiration we must return to the blue morpho butterfly. The air gaps between the Christmas Tree structures can be used to trap other vapours, changing the optical appearance of the surface accordingly.

“The American military are particularly interested in explosive agent vapour detectors,” said Professor Vukusic, “Can such a system be ultra-sensitive to a range of explosive materials? In the long term there is certain potential for it. The morpho wing itself would not be used, but a mimic of it, more highly applied, is currently being developed.”

Back at Hampton Court, the comedian Bill Bailey was delighted at the rapt attention being shown to the microscopic structures of butterflies, bees and beetles, particularly by the children.

“I was really drawn to this because I think this is where a lot of people’s interest begins. It begins with the familiar – what you see around you,” he said.

“I became fascinated and a bit obsessed by the Victorian naturalist Alfred Russel Wallace, and I made a documentary about him for the BBC. What is so charming about his love of the natural world, and indeed Darwin’s, is that it began with the tiny creatures. It began with beetles.”

“You start with the small creatures you see around you and that gives you this life-long love and curiosity to pursue these interests in later life.”

This article was written by Andrew Bomford for BBC News Science and environment.