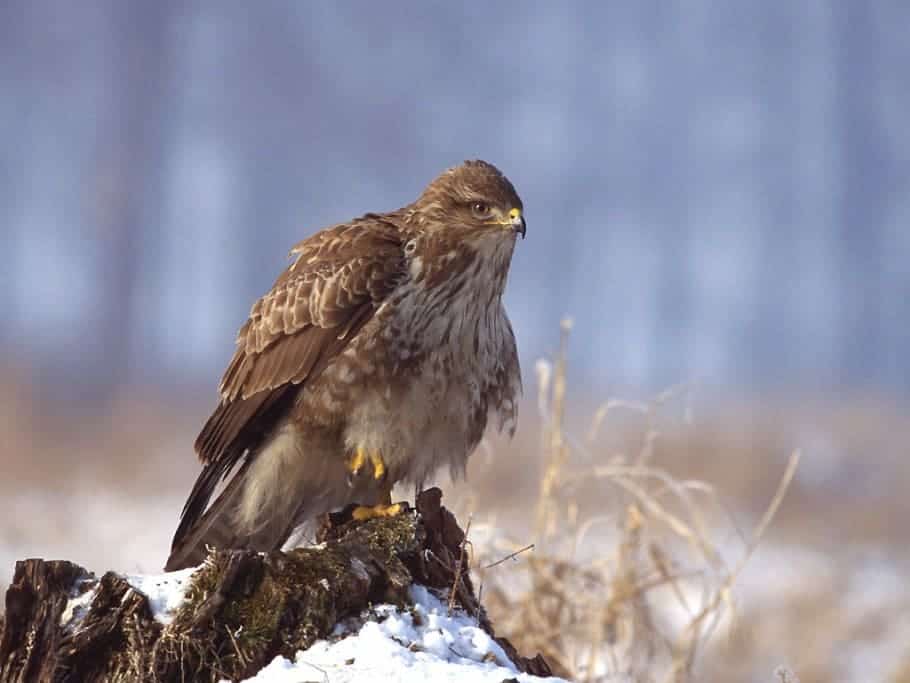 Conservationists have condemned a plan that would allow buzzard nests to be destroyed and enable the birds to be captured to protect pheasant shoots.

The UK Department for the Environment, Food and Rural Affairs (Defra) is to research ways of keeping buzzards from targeting the game birds.

Defra says it wants to maintain a balance between captive and wild birds that allows both species to thrive.

The RSPB said the idea of taking wild buzzards into captivity or destroying their nests was “totally unacceptable”.

The bird protection society criticised Defra for spending hundreds of thousands of pounds on the project when money was tight for conservation measures.

The RSPB’s conservation director, Martin Harper, said: “We are shocked by Defra’s plans to destroy buzzard nests and to take buzzards into captivity to protect a non-native game bird released in its millions.

“Destroying nests is completely unjustified and catching and removing buzzards is unlikely to reduce predation levels, as another buzzard will quickly take its place.

“Both techniques would be illegal under current wildlife laws.”

A Defra spokeswoman said: “The buzzard population in this country has been protected for over 30 years, and as the RSPB says, has resulted in a fantastic conservation story.

“At the same time we have cases of buzzards preying on young pheasants. We are looking at funding research to find ways of protecting these young birds while making sure the buzzard population continues to thrive.” Recent recovery

In a document setting out plans for the research project, Defra said the 2011 National Gamekeepers Organisation survey found that three-quarters of gamekeepers (76%) believed buzzards had a harmful effect on pheasant shoots.

Buzzards are thought to target pheasant release pens if they find there is a readily available source of food, and the government’s conservation agency Natural England has received a number of requests to license the killing of the birds of prey, which are a protected species.

In one case it was claimed that 25% to 30% of young pheasants were lost to buzzards, making the shoot unsustainable.

Buzzards have seen numbers increase by 146% between 1995 and 2009, although the increase appears to have levelled off between 2009 and 2010, according to the British Breeding Bird Survey.

But the RSPB said buzzards were eradicated from swathes of Britain by persecution and were only now recovering, as a result of legal protection and changing attitudes by many lowland land managers towards birds of prey.

The government’s document said the impact of buzzards on pheasant shoots had not been investigated in detail, and the extent of the issue was unclear.

But it said there were a number of sites where buzzards could be contributing to losses, and that there was an urgent need for management measures to reduce the impact on pheasant shoots. ‘Taken seriously’

The Countryside Alliance welcomed the government’s study, saying it showed the issue of predation by buzzards was being taken seriously.

But David Taylor, shooting campaign manager for the group, added: “It is a shame the government have had to commission this expensive exercise simply to appease a group of people who believe that raptors have a greater significance than any other bird.

“Such a mentality is dangerous for conservation and scarcely justifies the large cost to the taxpayer.”

Tim Russell, director of conservation at the British Association for Shooting and Conservation (Basc), said: “In recent years there has been growing concern amongst some gamekeepers that buzzards are causing serious damage around pheasant release pens.

“Basc believes that good scientific research is essential when making decisions about wildlife management and so we welcome this research.”

Nigel Middleton, of the Hawk and Owl Conservation Trust, said destroying the nests of buzzards was tantamount to persecution.

“We believe that alternatives should always be sought to lethal control where the commercial interests of humans come into conflict with birds of prey,” he explained.

This article was written and published by BBC News Science and Environment.