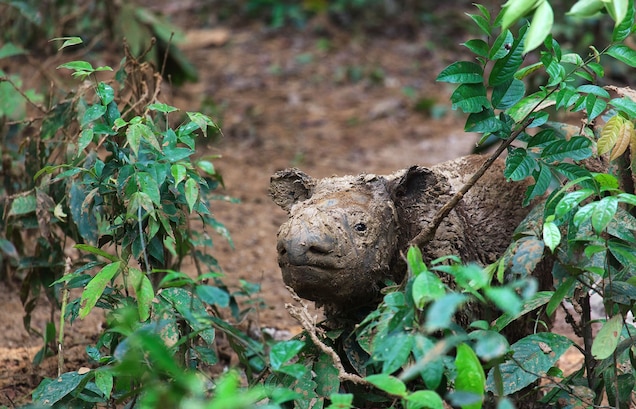 In 2008, a rhino wandered into an oil-palm plantation in Sabah, a state on the Malaysian island of Borneo. It was limping from a snare injury and, for a rhino, was unfamiliar looking: very small—and hairy.

When Rasmus Gren Havmøller—a Danish Ph.D. student focused on conservation, ecology, and genetics at the University of Copenhagen—read about this little rhino in a World Wildlife Fund article, he was intrigued. So he began digging for more information about the species.

What he learned was grim: The Sumatran rhino, one of three Asian species, had declined to the point of near extinction.

Sumatrans are believed to be the oldest surviving rhino species. They’re the smallest living rhinos and the only Asian rhinos with two horns. They once roamed throughout Southeast Asia and are the closest surviving relative of woolly rhinos, which died off about 10,000 years ago.

They’re very, very vocal, and it makes them incredibly cute.

Havmøller and a team of researchers began a comprehensive analysis on the status of Sumatran rhinos.

His study, published last month, revealed that the species is now extinct in the wild in Malaysia. The paper also noted that fewer than one-hundred are hanging on in the rain forests of the Indonesian island of Sumatra and in the state of Kalimantan, in Indonesian Borneo. Nine Sumatran rhinos live in captivity (one in the Cincinnati Zoo, three at facilities in Sabah, and five in the Sumatran Rhino Sanctuary in Sumatra).

Speaking from Copenhagen shortly after World Rhino Day and an outcry by conservationists over the fate of the Sumatran rhino, Havmøller explains his work in Malaysia; the threats facing these animals; their cute quirks; and what he thinks can save them from extinction.

Your paper concluded that Sumatran rhinos are extinct in Malaysia. What’s the impact of this finding?

The few we have left in the wild in Indonesia are now experiencing the same thing that happened in Malaysia over the last two decades—the signs of Sumatran rhinos become less frequent, which means that rhinos rarely ever meet and mate. And that’s a big problem. We need more rhino babies, and we need them fast.

Your research was based on more than a year’s worth of camera-trap footage in Sabah. What was it like working in the field and setting up those cameras?

Setting up camera traps is quite tiresome work. You walk all day. The terrain is quite strenuous—so it’s up and down, through rivers, it’s through mud. Actually finding the spot where you would place your camera trap is critical. And once you’ve found a spot, you also need to test it. You need to crawl on all fours and make sure that the camera trap is set up at the right height, and we aimed to set up between three and four per day.

Even with the results from the footage, how do you know for sure that there are no Sumatran rhinos left in Malaysia?

We’ve been doing quite a lot of surveys in quite an expansive area for a long time, and we have no signs. But when it comes to saying the species is extinct, this is of course with some sort of margin. I can’t guarantee that there isn’t one individual left in Sabah or Peninsula Malaysia, but I can tell you that there’s no hidden valley with 10, 15, 20 rhinos breeding and thriving. One rhino doesn’t make a population.

How has the population changed over time?

The numbers are incredibly difficult to know because there’s never been any good explanation of how many there are. And that’s not just with Sumatran rhinos. It’s only in the last few decades that we managed to make protocols—for instance, using camera traps that give good estimates of entities.

But they couldn’t have been common because if you look at the 1800s, 1900s, you get some very heartbreaking records of sales of rhino horn and export, in the thousands.

Obviously Sumatran rhinos must have been quite abundant throughout Southeast Asia. But once they started getting rarer, during the 1950s and ’60s, there weren’t any good estimates.

You mentioned poaching as one of the reasons for the population decline. Can you tell me more about this and also other factors that account for the loss?

Initially, it was definitely the hunting for horns, traditionally for Chinese medicine. The horns were also used as daggers in the Arabian Peninsula, as well as for trophies and carving sculptures out of them.

Then, the second thing was the habitat destruction. They were split up into much more fragmented populations as a result of habitat loss.

I can’t guarantee that there isn’t one individual left in Sabah or Peninsula Malaysia, but I can tell you that there’s no hidden valley with 10, 15, 20 rhinos breeding and thriving.

And the third thing that happened was we had so few individuals in an area as a result of both poaching and habitat fragmentation, that rhinos rarely ever met and therefore rarely ever bred.

Why is it important to get them breeding?

What is worth saving is for people to have the option to go and experience this little rhino in the forest. Everybody should have that option.

I’ve also read that Sumatran rhinos are quite quirky.

The quirky things about Sumatran rhinos, apart from being the smallest rhino, is that they are hairy. It’s a very odd feature of any rhino, because you’re not used to seeing hairy rhinos. But they’re completely covered in hair, especially the young ones. And the funny part is that if you actually touch a Sumatran rhino they’re very, very soft. And finally, they sound mostly like humpback whales when you hear them. They’re very, very vocal, and it makes them incredibly cute.

In your paper, you suggest spurring population growth by creating a single “metapopulation” strategy. What does that mean?

It means that although you have rhinos in three separate wild populations, you consider them all one. On paper, you consider them all one. And in practice, it means that you move individuals among the three populations. So you move males and you move females to ensure that you have the optimal breeding and you get the optimal amount of genetic diversity within the whole population. But currently, in Indonesia, you’re not allowed to catch Sumatran rhinos, let alone move them across internal state borders.

In the 2013 Bandar Lampung Declaration, Indonesia agreed to a conservation strategy to increase the Sumatran rhino population. How well have they implemented it?

The problem is that they haven’t. The real problem for Indonesia is that to change the laws of going out, capturing rhinos and moving them between states, it’s really a presidential decree that’s needed. It’s from the very, very top because it’s not just some local forest agency manager who’s allowed to go out and say, Fine, you can go out and catch Sumatran rhinos. So the call is really getting president Joko Widodo of Indonesia to amend the law so the actual implementation can be done, and actions can start to take place.

How do you think poaching can be curbed?

If you can increase the protection by hiring more locals, you’re also creating a local incentive for not poaching rhinos, because the locals are benefiting directly or indirectly from the anti-poaching unit and the salary they get. Much more protection is needed.

Not just for the rhinos—the presence of anti-poaching units would also prevent elephant, tiger, and clouded leopard poaching.

Now that it’s established that the Sumatran rhino is extinct in Malaysia and nearly extinct elsewhere, what needs to be studied next?

This is a multiple step process. The first step is figuring out where the Sumatran rhinos are. That is a very, very crucial first step. The next step will be figuring out what’s in these areas—males or females? What does it look like in terms of competition?

What is worth saving is for people to have the option to go and experience this little rhino in the forest.

When that is sorted, you need to make sure you establish these intensive protective zones.

Then the next step is actually making sure that you increase the amount of animals within these designated protection zones, and that means going out and catching rhinos. So you need to make sure there is room for them and that there’s some sort of area where they can adjust to the new home range. And then you need to start working on making sure you can move rhinos from one area to the other.

Are you hopeful for the future of the Sumatran rhino?

When you work in conservation, giving up is not really an option. It’s just one of those things you need to continue—despite the setbacks, despite all of the difficulties. When you look historically at rhinos, it’s interesting because the white rhinos in the late 1800s went down in South Africa to somewhere between 20 and 40 individuals. And they made it back to nearly 17,000 individuals 200 years later. They’ll go extinct if we don’t help them.

This story was produced by National Geographic’s Special Investigations Unit which focuses on wildlife crime and is made possible by a grant from the BAND Foundation. Lead Image: A Sumatran rhino calf, Andatu, at the Sumatran Rhino Sanctuary in 2012. He was the fourth Sumatran rhino born in captivity in modern times. A new report shows the species is extinct in Malaysia and fewer than 100 of the animals remain in the wild. Photograph by Rasmus Gren Havmøller.