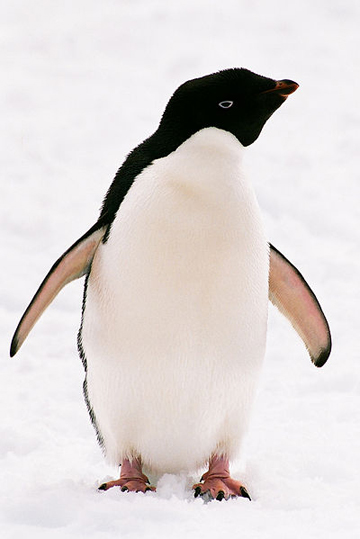 Human-caused climate change is altering the habitat of Adélie penguins (Pygoscelis adeliae). In an article recently published in PLOS ONE, a team of researchers led by Amélie Lescroël from the Centre d’Ecologie Fonctionnelle et Evolutive (CNRS) in France, found that changes in sea-ice content and newly formed icebergs significantly impacted Adélie penguin communities in the Ross Sea.

Climate change is leading to major shifts in sea ice. One of the largest glaciers in Antarctica has begun to melt at a rate some scientists describe as irreversible. Pine Island Glacier contributes a fourth of the discharge of the West Antarctic Ice Sheet. It is estimated that if this entire ice sheet were to melt, sea levels would rise by ten feet. Other areas of the Antarctic are experiencing cooling events, resulting in greater ice coverage known as “fast ice.” However, scientists believe that melting will supplant fast ice in the near future.

“While net sea ice cover (i.e., the area of ocean covered by ice) has increased over the past few decades [in Antarctica] owing to wind changes brought largely by mid-latitude warming and the Antarctic Ozone Hole, modeled predictions point to a decrease by 5-15 percent, depending on sector, by 2025-2052,” the study states. “Concomitantly, increased ice shelf instability will lead to more frequent iceberg calving, including very large icebergs (hundreds of square kilometers).”

Sea ice cover variability directly affects Adélie habitat, and the species’ ability to adjust to this variability will determine their future.

Adélie penguins depend on sea-ice for foraging, resting, molting, breeding and migrating. They are one of only two penguin species that depend on sea ice and not icebergs, the other being the Emperor penguin (Aptenodytes forsteri).

“This ‘dependence’ is actually a manifestation of them being the only penguin species that are able to cope with sea ice,” Lescroël told mongabay.com.

To a certain extent, Adélie penguins are adapted to cope with changes in their habitat. For instance, they’re able to easily gain and lose fat depending on ice conditions, and dive for longer periods of time compared to other penguin species.

“They dive mostly between 10 and 50 meters deep to catch their prey but can dive up to 180 meters, which is a world record,” said Lescroël.

The southernmost extent of Adélie habitat is the Ross Sea, where 38 percent of the world’s population resides. Lescroël and her colleagues evaluated data that had been collected over thirteen years at Cape Crozier on Ross Island, a volcanic island located near the Antarctic mainland.

The researchers conducted their study in a fenced-in nesting area installed in 1996, allowing penguins access through only one entrance outfitted with a scale. They collected each penguin’s trip duration as well as changes in weight within breeding seasons and over multiple years. Using these data, the researchers were able to record how long it took the penguins to forage and how much food they brought back to their chicks.

“When they are nesting, parents take turns on the eggs or chicks,” Lescroël said. “One of the parents stays at the nest while the other goes [to] sea to catch food. On Ross Island, Adélie penguins feed on crystal krill and silverfish. They swallow the prey as they catch it, underwater. When they come back to the nest, they regurgitate the food to their chicks.”

Since Adélie penguins depend on sea-ice, one might expect the increased presence of “fast ice” in some areas would equate to habitat expansion. However, the study’s findings indicate this is not necessarily so. When there was less sea-ice, the penguins were able to fish for longer periods of time and bring more food back to their chicks.

“This is mainly because when there is lots of concentrated sea ice, penguins have to walk over the sea ice (rather than swim) to reach the open water where they could dive,” Lescroël said. “This is more costly in time and energy. But this is when environmental conditions are “normal.”

In the middle of the study, when four giant icebergs broke off as a result of increased melting the research team labeled this as an extreme environmental event. The icebergs were present in Cape Crozier’s landscape for 5 years, and the unique event allowed the team to observe how Adélie penguins responded to icebergs.

“The presence of these icebergs dramatically changed the physical environment of the penguins in many ways: less open water was available for diving; penguins were disoriented due to the movements of these huge blocks of ice just in front of the colony; there was less ocean productivity in the first year; and there were changes in the drift pattern of pack ice,” Lescroël said, adding that “the changes were so extreme that sea ice concentration did not matter anymore. The foraging efficiency of Adélie penguins was constrained to lower levels during these five years, no matter what the sea ice concentration was.”

While the icebergs were present, fewer chicks were reared than usual although the number of adults was not affected. However, soon after the icebergs left the area, breeding levels returned to normal.

“Our work shows that if the frequency of such extreme events increases, then it will become very hard to predict how penguin populations will buffer future sea ice changes,” Lescroël said.