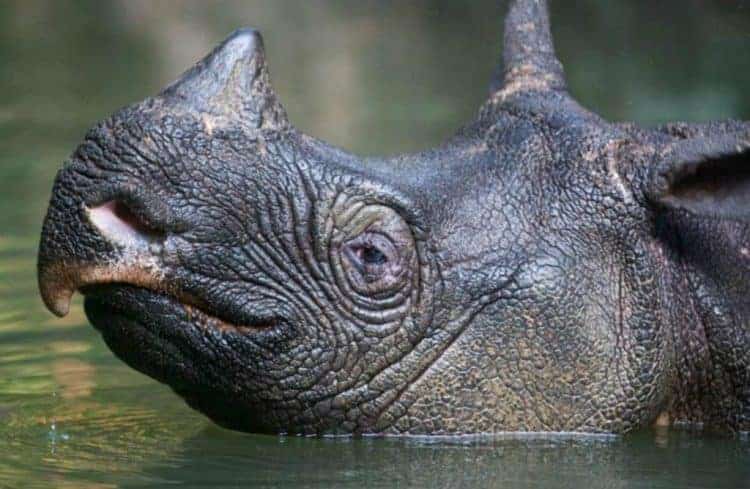 As the old saying warns, it’s bad enough to put all your eggs in one basket. If you have to, though, at least try not to leave that basket sitting on the beach under an active volcano.

Unfortunately, that’s basically the situation of the last population of the Javan rhino (Rhinoceros sondaicus).

The Javan rhino was once found throughout Southeast Asia, but since the poaching of the last member of its mainland subspecies in Vietnam in 2009, its only population is found in Ujung Kulon National Park on the western tip of Indonesia’s Java Island.

Such a limited geographic distribution puts any species at risk, but to make matters worse, this location is subject to a number of hazards. One is the volcano Anak Krakatau, growing basically right next door where the famous and deadly Krakatoa once stood.

Recently published work also shows that the locations the rhinos prefer are at high risk from tsunamis. On the bright side, this research is collecting previously unknown information that’s crucial for ensuring the future of this little-known species.

However, the findings also add to the pressure to find a location for a second population — a process that’s far from simple.

Where the rhinos are

Although they are all in a limited area, it’s not easy to study these animals, and their exact distribution and number remain unclear. Recently published work analyzing data collected through 2013 from 160 camera traps has shed some light on these questions, as well as revealing important details about the population.

Analysis of the data showed that rhino density within the park varies according to the terrain. To put it simply, coauthor Barney Long said, “Rhinos in Ujung Kulon National Park like lower elevation forest with lots of wallows.”

This preference for lower elevations near the coast is what puts them at risk. Java lies in a part of the world where earthquakes, which can cause tsunamis, are frequent. More than 30 quakes of magnitude seven or more have occurred in the last 30 years, and these have commonly caused tsunamis of 20–30 meters above sea level at their furthest point inland along the coasts of Java and Sumatra.

A tsunami of 30 meters would inundate all of the rhino’s preferred habitat, and even smaller ones would affect a substantial proportion of the population. These are far from unheard-of events: both the 2004 Indian Ocean Tsunami and 2006 West Java Tsunami produced wave heights and run-up that would have drowned most of the world’s remaining Javan rhinos if they’d occurred in the right (or wrong) place.

Who the rhinos are

Because of these risks, conservationists agree on the urgent need to move some rhinos to appropriate habitat elsewhere. “All stakeholders, including key senior level officials of Indonesia’s Ministry of Environment and Forestry, agree that at least one new population needs to be established,” said Long.“It is critical for the long-term survival of the species that a second population is established as the rhinos in Ujung Kulonare too vulnerable to too many significant threats.”

What recent research has found about their numbers adds to the importance of such a plan, because although the rhinos are breeding successfully, the size of the population is not increasing.

“The population appears to be stagnant at about 60,” Long said, and there’s a likely reason for this: “When rhinos hit carrying capacity, their breeding stops.”

Moving some of the rhinos, then, will not only remove part of the population from risk, but also means that the ones that remain are likely to breed faster. As Long observes, such translocations have been successful in increasing numbers for the greater one-horned rhino (Rhinoceros unicornis) in India and Nepal. “Where there is high density, breeding is low. Move some and both breed faster.”

But once a suitable location is decided on, you can’t simply scoop-up and move the first rhinos you happen to catch. To ensure that populations in both locations are viable, it’s crucial to have detailed information about individual rhinos — something researchers are still working to gather and analyze.

“This monitoring gives us an idea of what’s going on the ground — we’ll see where rhinos are moving, which females have bred, which males are wandering around not meeting any females,” said Long.

The information about individuals will give them an idea of which rhinos should be moved and which left behind. “Old male rhinos often become sterile, but are keeping other males away from their females,” said Long. “A female of breeding age that isn’t breeding right now can be moved — conversely don’t move the ones that are breeding successfully.”

Efforts are also being made to increase the carrying capacity of the park by improving the condition of the habitat. One important strategy is removal of an invasive plant, the arenga palm (Arenga 0btusifolia), whose presence reduces the food available to rhinos.

“The palm contains sodium oxalate which helps defend it against herbivores such as rhinos, wild cattle and deer,” said Sectionov Inov, Indonesia liaison for the International Rhino Foundation (IRF). “Also, where arenga palm dominates, the growth of other plant species, including many Javan rhino food plants, is suppressed.”

A successful ongoing project to increase the usable habitat is the Javan Rhino Study and Conservation Area (JRSCA or JaRhiSCA), a joint project of the Rhino Foundation of Indonesia (YABI), the IRF and the Ujung Kulon National Park.

The JRSCA, an area of about 5,300 hectares (20.5 square miles) in the southern part of the Gunung Honje area along Ujong Kulon’s eastern boundary, is fenced on the sides close to villages to prevent access by livestock. It’s estimated that about 1,730 hectares are dominated by arenga palm. But since 2011, about 95 hectares of arenga have been removed, and the number of individual rhinos observed to use the area has increased from two to nine, according to Inov.

This program demonstrates that it could be possible to renovate additional habitat, and that other areas are suitable, but conflicting needs must be resolved first. “It would be ideal if the National Park could free the illegally occupied lowlands of the National Park Gunung Honje and restore the land into another extension of the habitat,” said Widodo Ramono, executive director of YABI. People were successfully relocated from the current reserve, but this needs to be done thoughtfully, both for humanitarian reasons and to ensure their support for the park.

Still, no matter how much habitat can be made useful, it’s clear that the risks of having the entire population in one geographic location are just too high. In addition to tsunamis or earthquakes, a single population could be wiped out by disease, including those transmitted by nearby livestock.

But the question is where. A joint workshop of conservation organizations in 2015 set in motion a project to assess potential sites. Political, human, and environmental considerations all need to be juggled, and there’s no perfect solution.

“From the options that we’ve looked into on Java, we have shortlisted two locations, namely Cikeusik and Cikepuh,” said Ramono. “And then we inclined more towards Cikepuh because it is the most viable.”

“Most viable” doesn’t mean “no problems,” however. Although the area is safer from tsunamis and is already a wildlife reserve, there are many conflicting interests. “Number one it’s a military zone, number two it’s been nominated to be an eco-park by the Sukabumi district office,” said Ramono. “And then, the area is used by locals for shepherding, for seasonal agricultural farming, and many other issues that need to be resolved.”

Ramono said he hopes a final decision will be made by the end of the year, but he estimates that once settled, it will take 15 years to make the Cikepuh safe for rhinos.

He also believes that locations outside Java also need to be considered for additional populations, but this is politically difficult and will require more education and outreach, “so that regions that have rhinos are willing to let go of the rhinos to other locations,” he said. “What we are concerned about is the species — about how to save the species.”

And many who share this concern feel there is no time to lose. “Protection and activities that promote the growth of the rhino population in Ujung Kulon are critical to the survival and recovery of the species, but being satisfied with a single population that can only expand to a handful more individuals is not sensible,” said Long. “We must manage the species or population growth and establish new populations to reduce the species’ extinction risk concurrently with good management of Ujung Kulon. All stakeholders must accelerate their efforts in this regard before tragedy strikes.”

This article by Linda Lombardi and Basten Gokkon was first published by Mongabay.com on 22 Sep 2017.