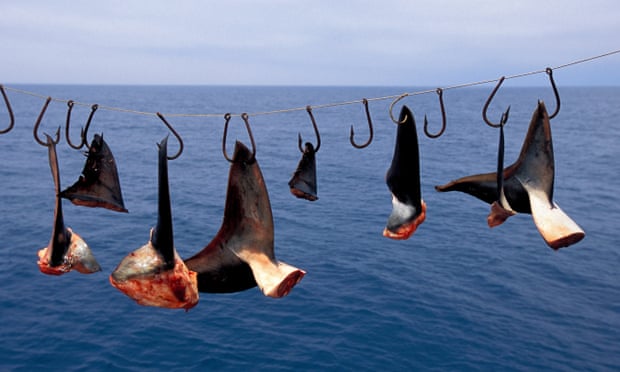 It was on a family visit to Hong Kong that Kristyn Wong-Tam noticed her uncle – a well-regarded chef – was the only person at the table not touching a bowl of shark fin soup.

When he explained how fins are hacked from struggling sharks, before their bodies are tossed back into the water, the rest of the family soon lost their appetite.

“We didn’t understand how the food came to the table,” recalled Wong-Tam. “But it made me think about whether I wanted to eat it, if my uncle – who was actually preparing the food – didn’t want to.”

The experience became a pivotal moment for Wong-Tam: as a Toronto city councillor, she went on to lead efforts to stamp out the sale of shark fins in Canada.

More than a decade later, she has reason to celebrate: on Thursday, after years of failed legislative attempts, Canada became the first G7 country to ban the import and sale of shark fins. The bill is awaiting royal assent.

“Shark finning is an unquestionably destructive practice, which is contributing to the global decline of sharks and posing an ongoing threat to ocean ecosystems,” said the fisheries minister, Jonathan Wilkinson. “The new actions … are a clear example of Canadian leadership on the conservation of our ocean environment.”

Shark fins have long been considered a delicacy in Asian countries, often served at weddings and engagement parties. But the practice has come under increasing scrutiny.

Many fins that end up in soup come from a practice known as “shark finning”, where fins are hacked from fish which are then thrown back into the water and left to die. The United Nations estimates that as many as 73m sharks are killed for their fins each year.

Canada banned finning in its own waters in 1994, but it has continued to allow the import of fins – and was one of the largest markets outside Asia. Most of Canada’s fins came from China: more than 133,000 kilograms were imported last year. Hong Kong, Trinidad and Tobago, and the United States also contribute to the Canadian market, for a combined value C$3.2m (US$2.4m).

Environmental groups across the country praised the legislation, but some biologists have argued that overfishing – rather than finning – remains the biggest threat to sharks.

In a 2017 journal article, biologists David Shiffman and Robert Hueter argued that shark fin bans could “contribute to the misconception that demand for shark fin soup is the only threat facing shark populations worldwide”.

They distinguish between the “inhumane” and “wasteful” act of finning and using fins taken from sharks sustainably harvested for their meat, many of which are caught off the coastal United States.

The biologists also pointed out that while global demand for shark fins is decreasing, meat is becoming increasingly sought-after.

“A focus on fins also oversimplifies the threats facing sharks, which can reduce political support for sustainable management,” they wrote. “Such a focus also targets Asia … leading to potentially problematic cultural clashes that have already been the focus of lawsuits against state-level shark fin trade bans in the United States.”

In Canada, a previous fin ban enacted by Toronto was struck down, after courts expressed concern over potential cultural discrimination.

Wong-Tam, who led the charge for Toronto city council’s first ban in 2012, rejected the “groundless” allegations of discrimination: “Governments have the right to regulate businesses and what they sell,” she said.

Wong-Tam takes heart from the younger generation of Asian-Canadians, many of whom reject the use of fins as an ingredient. She also credits the Chinese community – both in Canada and abroad – for its increasingly outspoken criticism of finning.

That has not always been the case, she acknowledged. “For a period of time, within the Chinese community, I was seen as a ‘traitor’ – someone who would betray her race and her culture,” she said. “But I knew as I worked through the discussion and unpacked the issue with different community members, I knew that we were on the right side of history.”

This article was first published by The Guardian on 21 June 2019.