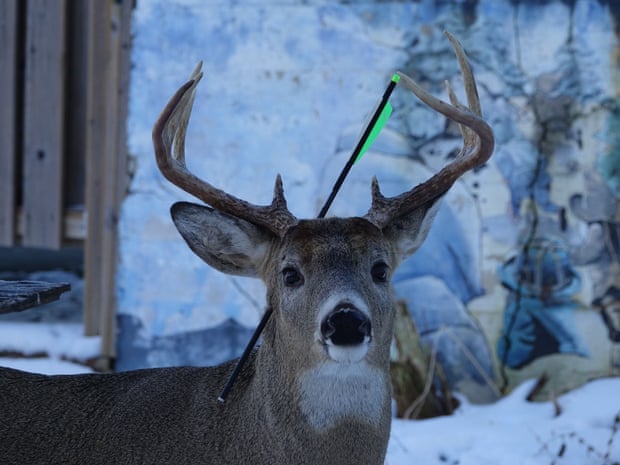 The Canadian winter can be tough for deer, as temperatures plummet and food becomes scarce. But Carrot, a whitetail buck living in northern Ontario, faces an additional challenge: he has an arrow sticking out of his head.

“It’s been really tough to see,” said Lee-Anne Carver, a wildlife photographer in the city of Kenora, who named the young animal. “I’ve been photographing animals for years and there’s something special about Carrot. He’s unlike any deer I’ve ever met.”

Now, Carver is trying to share Carrot’s plight with as many as she can, in the hopes of saving the injured deer.

For the last three years, Carrot, who was orphaned as a fawn, has been visiting Carver and her husband in their backyard. “He’s very gentle and affectionate,” said Carver.

But last week Carver’s husband saw that the deer had been injured. When she went out into the snowy yard to investigate, she saw a black arrow with bright green fletching was impaled in Carrot’s head.

Despite the shocking injury, however, the deer appeared unbothered. When he walked over to Carver to sniff her hand, she didn’t see any blood or sign of infection.

“It was very disturbing to see,” said Carver. “But he was still acting like his normal self.”

Local officials have promised Carver they won’t euthanize the injured deer, but a conservation officers and hunters have advised against removing the bolt. Because the arrow is probably preventing bleeding, extracting it could reopen the wound in his head and cause infection.

“It’s really disturbing. I want to put my hand out there and grab it and say, ‘There, I fixed you, Carrot.’ But that’s not possible.”

On Wednesday afternoon, police officers and staff from the province’s ministry of natural resources arrived at Carver’s property, hoping to trim the arrow.

After numerous attempts to tranquilize the buck – including a dart that froze in the chamber because of the cold – officers managed to sedate him and lop off the top half of the arrow shaft.

Carver said the timing and process was “like an impossible dream” and is hopeful that the wound won’t worsen, with the shaft falling out in the coming months.

Four years ago, the city of Kenora passed a bylaw permitting residents to shoot deer with bows within city limits.

Carver started a Facebook page, Carrot the Magic Deer, and has received messages from supporters all over the world.

“The internet is a place where everybody wants to argue about something. But Carrot seems to be unifying people,” said Carver. “It’s been so overwhelming so see all of this compassion, that’s sorely lacking in the world right now. There’s so much suffering out in the world these days – and Carrot’s suffering too – but he’s become bigger than that. He’s given us something to focus on right now, and something to love. And that means a lot.”

This article was first published by The Guardian on 18 December 2020. Lead Image: Carrot, a whitetail buck living in northern Ontario, with an arrow sticking out of his head. Photograph: Lee-Anne Carver.