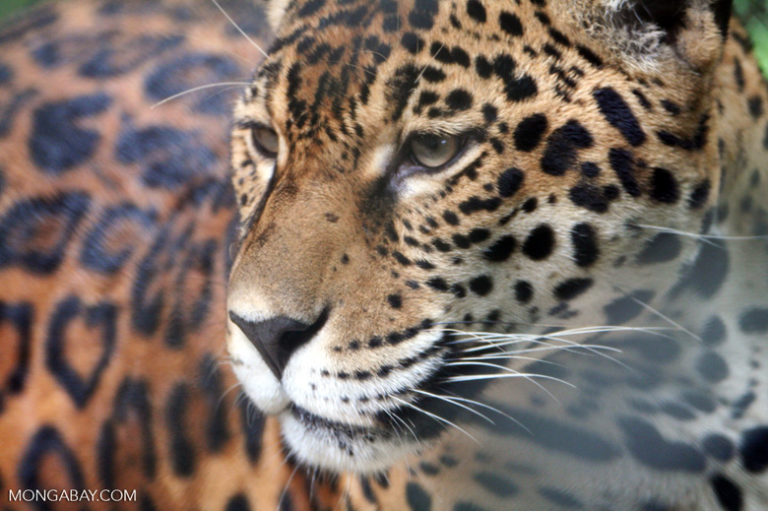 With no natural predators to worry about, jaguars (Panthera onca) roam the forests of South and Central America. This feline is found in 18 countries, but only 4% of its critical habitat is effectively protected.

The lack of protection has allowed its habitat to be destroyed and fragmented, the main reason why this emblematic species has been extirpated from 40% of its historical range. Due to a declining population and pressing threats, jaguars are listed as near threatened on the IUCN Red List, and are struggling to persist in many parts of their range.

The Cerrado biome in Brazil is one of those habitats that is losing its native vegetation to the rapid expansion of agricultural and livestock industries.

It’s the country’s second-largest habitat type, after the Amazon, and the planet’s most biodiverse savanna, home to 5% of the world’s known plant and animal species.

But unlike the national parks in Amazon, the Cerrado’s protected areas are substantially smaller, which present challenges for wildlife conservation, especially for large carnivores like the jaguar that require large areas to satisfy their ecological and reproductive needs.

To assess jaguars’ chances of survival in protected areas in the Cerrado, researchers from the Jaguar Conservation Fund (JCF), a Brazilian NGO, carried out a camera-trap survey in Emas National Park in the country’s southwest.

The 131,400-hectare (324,700-acre)park, a UNESCO World Heritage Site since 2001, is home to at least 13 endangered mammal species. But on its own it’s not large enough to sustain a viable jaguar population, and the jaguars moving in and out of the park could be exposed to substantial extinction risk in the future, according to the survey, whose findings were published in the journal Animal Conservation.

In the Cerrado, jaguars have home range sizes of up to 15,000 hectares (37,000 acres), so for a park to sustain a viable jaguar population just within its borders, it needs to cover an area greater than 1 million hectares (2.5 million acres) — or nearly eight times the size of Emas National Park. The park is about half the size of Luxembourg, similar to most others across the Cerrado, where only 2% of the biome is currently protected. If large carnivore populations live inside protected areas of this size, and these parks are not connected with one another, then the animals are at risk of becoming genetically isolated. To prevent this, a viable and cost-effective solution is to promote jaguar immigration from nearby populations, the study says.

Lead author Shannon Finnegan, from the State University of New York’s College of Environmental Science and Forestry, told Mongabay that jaguars travel outside the protected area in search of prey.

“Jaguars in this region move outside the boundaries of the park and onto agricultural lands regularly,” she says, adding she believes there is strong potential for the implementation of dispersal corridors into the Emas population.

The way forward: creating corridors in a human-dominated landscape

Even though the Cerrado is a region with relatively low jaguar densities, creating effective dispersal corridors is crucial to ensuring the long-term survival of large carnivore populations. The study concludes that only a few immigrant jaguars are required to substantially mitigate the jaguar’s extinction risk in small populations.

“Our simulations also suggested that improving net immigration may be more important than increasing population sizes in small isolated populations,” Finnegan says. JCF is already working on implementing a wildlife corridor that will create a safe passage from the Cerrado to the Amazon.

“JCF is in the process of implementing what will be Brazil’s largest jaguar corridor along the Araguaia River. The idea is to connect populations across the fragmented Cerrado to the core and strong population of the Amazon to ensure genetic diversity and population persistence,” Finnegan says.

To create this corridor, the Dutch NGO Black Jaguar Foundation (BJF) will plant 1.7 billion trees along the Araguaia and Tocantins rivers in the Amazon and Cerrado biomes.

But what does this entail?

To create effective wildlife corridors, JFC must make sure jaguars can cross human-dominated landscapes. When these big cats venture outside protected areas they sometimes prey opportunistically on livestock, so it is not uncommon for humans to hunt them in retaliation. According to Finnegan, this scenario is not as prominent in the Cerrado compared to other ecosystems like the Amazon or the Pantanal wetlands. “As the majority of the Cerrado is used for crop cultivation, jaguars do not necessarily pose a threat to these industries,” she says.

The main threat to the feline posed by humans comes indirectly when farmers kill one of their major sources of food.

“Farmers often try to eliminate crop-raiding species, such as peccaries, through various means including poisoning,” Finnegan says. “This not only eliminates the jaguar prey base but may also kill jaguars which may feed on poisoned carcasses.”

The study highlights the need to increase conservation efforts toward conflict resolution in human-dominated landscapes.

To find alternative ways to alleviate the pressure from cattle ranchers and farmers, it’s necessary to understand the roots of the conflict between people and jaguars. The Jaguar Conservation Fund is working closely with communities in the Cerrado to find ways to compensate them when they lose cattle or crops to jaguars or their prey base, in return for an agreement to refrain from killing the cats or their prey species in retaliation.

“JCF is driving a jaguar-friendly initiative to encourage farm owners to protect jaguars and jaguar habitat in return for marketing opportunities of jaguar-friendly products,” Finnegan says. “JCF has worked very closely with local agrobusinesses to help implement better land-use practices to support jaguar survival on agricultural lands and this has been met with great support.”

Another way to reduce conflict is by using fences as a predator-proof enclosure. “Electric fencing around crop plantations has also seen some success in preventing damage,” the study says.

Jaguars also serve as a natural control on crop-raiding species like peccaries, so by keeping jaguars safe, the community is also protecting its fields, Finnegan says: “By encouraging local farm owners to protect the jaguar habitat on their lands, we can help reduce the number of crop-raiding prey species by means of increased predation.”

Future challenges in the Cerrado

Finnegan says she fears that the current Brazilian government, led by President Jair Bolsonaro, may lean too heavily toward economic development at the expense of conservation efforts. She says the protection of Indigenous territories has contributed to the survival of jaguars outside of protected areas in the past because it allows the animals to successfully move and breed throughout a matrix of agricultural landscapes. However, “the changing of regulations on Brazil’s forest code in 2012 and 2016 in the protection of native habitat on private lands is very worrisome,” she says. Bolsonaro has already deregulated environmental enforcement and created a wave of deforestation in the region, making the protection of wildlife habitat and Indigenous territories alike even more difficult.

Finnegan says she hopes the study will serve as a model for other protected areas that are largely isolated and surrounded by agricultural land. The key to the jaguar’s continued existence, she says, is a collaborative effort between the government, environmental organizations and landowners. Only by working together will the Cerrado see successful conservation efforts that protect this apex carnivore and its habitat.

This article by Romina Castagnino was first published on Mongabay.com on 16 February 2021. Lead Image: A jaguar by Rhett A. Butler/Mongabay.