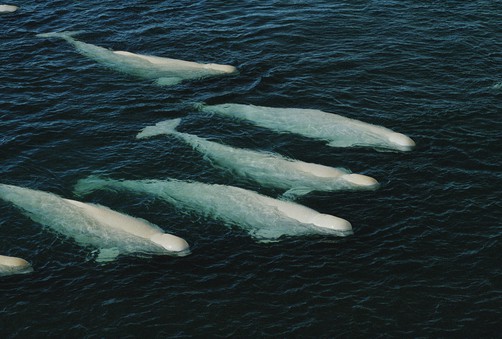 The occurrence of human diseases in marine mammals is rapidly on the rise and an alarming development for our oceans. The latest species to succumb is the canary of the sea: the beluga whale. Researchers from the University of British Columbia recently discovered Toxoplasma gondii, a devastating parasite, in a western Arctic population of beluga whales.

Usually found in cats, this parasite can cause blindness and other effects in humans, although its effect on whales is unknown. Scientists attribute the wide-ranging movement of pathogens to warming Arctic conditions, but the exact cause of the pathogen remains a mystery. One of the only ways to kill this parasite is to freeze it, so it’s likely that above-freezing temperatures in a warming Arctic are aiding the spread of this parasite.

This discovery is also worrying for people, too, as local the Inuit could be infected by eating whale meat.

The spread of pathogens and diseases to new corners of the world is just one of the many troubling effects climate change can have our marine environment, and Oceana will continue its efforts to promote renewable energies and preserve our climate.

This article was written by Sara Young for The Beacon.

I like many posts which you write bot not this I am afraid. I mean it is too many uncertainties and the article angled.

Even though it can be transferred – Toxoplasma gondii mainly occurs in cats, not in humans. The effect on humans is said to not be that great as you explain it here, most people dont get any of there symptoms at all. Its just inaccurate

Maybe this is where toxo parasite originated and eventually spread to felines from eating fish….

i guess this is due to global warming and what can be done x this alarming situation.