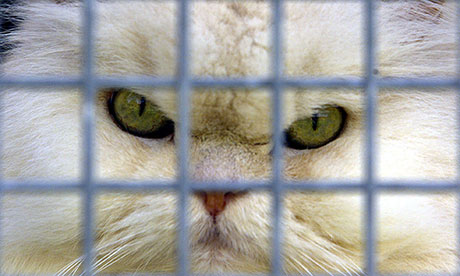 Call it the Kiwi cat wars. In the island nation said to harbour more cat owners per capita than any other country, a furore has broken out over a crusade to eradicate man’s second-best friend. The charge is being led by Gareth Morgan, a nationally renowned economist turned environmental activist, who has dubbed cats “natural born killers” that are menacing the native bird population and bringing some to the verge of extinction.

In late January, the philanthropist launched a website outlining his plan that would eventually lead to a cat-free country. Some scientists said he was, in fact, understating the threat posed by little Fluffy, while others argued that the ecosystem was far more complex than he was allowing for.

The mere suggestion of a feline-free nation is raising the dander of cat lovers of every stripe, with everyone from the prime minister to animal-welfare activists calling Morgan a kitty hater of the worst sort.

Writing on the opposition group Cats to Stay’s Facebook page, which has more than 6,000 “likes”, Jeremy Chang wrote of Morgan: “making the capital pest-free? Then he should stay away from Wellington.”

New Zealand has an uneasy relationship with pests. Because of its geographic isolation, the country has become home to an exotic bird life that evolved in the absence of any native mammals, save three species of bats. Many birds, including the kiwi – the country’s national symbol – became flightless.

Rats, opossums, short-tailed weasels – these have long been maligned as wholly unwelcome interlopers wreaking havoc on the native birdlife and landscape. The conservation department spent two years and more than $500,000 eradicating three short-tailed weasels off nearby Kapiti Island, for example.

But cats? New Zealanders love their little felines, with one study estimating they have the highest rate of cat ownership in the world.

“We have got a concerted effort on opossums, rats, mice, mustelids, but the one that stands out is cats. Everybody is too bloody PC and scared to take on cats. So I thought, I can handle that,” said Morgan, one of Wellington’s best-known figures.

Undeterred by the hate mail in his inbox – much of it from Americans, Morgan says – the businessman took his message to New Zealand’s third-largest island recently in a campaign to make it pest-free, meaning cleared of feral cats, rats and other pests. He also wants the 400 residents to contain their free-roaming domestic cats.

New Zealand has already cleared more than 80 of its 220 offshore islands of invasive species. But Morgan’s target, Stewart Island, is 15 times larger than any other that has been made pest-free, so the effort would be closely watched by conservationists around the world.

Morgan insists he is not anti-cat, just anti-wandering-cat. He wants domestic cats registered, as dogs are, and also neutered, kept indoors at all times or taken out on a leash, and not replaced when they die.

The furore has renewed a broader debate about the possibility – however far-fetched – of a New Zealand free of pests. Why not chuck out the whole lot? The idea gained steam in early 2012 after Paul Callaghan, a celebrated scientist who died later that year, said the concept could be New Zealand’s equivalent of the Apollo space programme.

The notion of a pest-free New Zealand is not without huge challenges, including a massive price tag. A recent report by Landcare Research, a government research arm, said such an undertaking would exceed $20bn.

Still, New Zealand scientists talk dreamily about their 50-year vision of a country with no pest or invasive species. Cows and sheep could stay, but opossums, rats, weasels, ferrets and mice would have to go. And cats?

“Cats are the major sticking point to a pest-free New Zealand,” said James Russell, an ecologist at the University of Auckland.

Cats may be cuddly companions, but they are predators, too: a study earlier this year by the Smithsonian Conservation Biology Institute and the Fish and Wildlife Service found that cats kill a median of 2.4 billion birds in the US each year, substantially more than previously thought.

It’s hard to overstate just how much New Zealanders love birds, perhaps because theirs are unlike any others on the planet. Their dollar bills are festooned with birds. Radio New Zealand plays a bird call before the morning news. There is a multimillion-dollar bird sanctuary just minutes from downtown Wellington. (Morgan calls it “the most expensive cat food factory in the country.”)

But there are competing views on the impact cats have in a complex ecosystem, and whether birds would in fact be worse off in the absence of cats, who prey on bird-killing rats. “The jury is out,” said Andrea Byrom, an ecologist at Landcare Research.

Morgan helps fuel the debate by taking a few playful swipes at his critics. Take, for instance, his exchange with the prime minister, John Key, after Key said his cat, Moonbeam, would never hurt abird.

Why not perform an autopsy on Moonbeam, Morgan recalled suggesting. “And I said, ‘If there isn’t any feathers, I’ll buy you a new one.'”

This article appeared in Guardian Weekly, which incorporates material from Washington Post