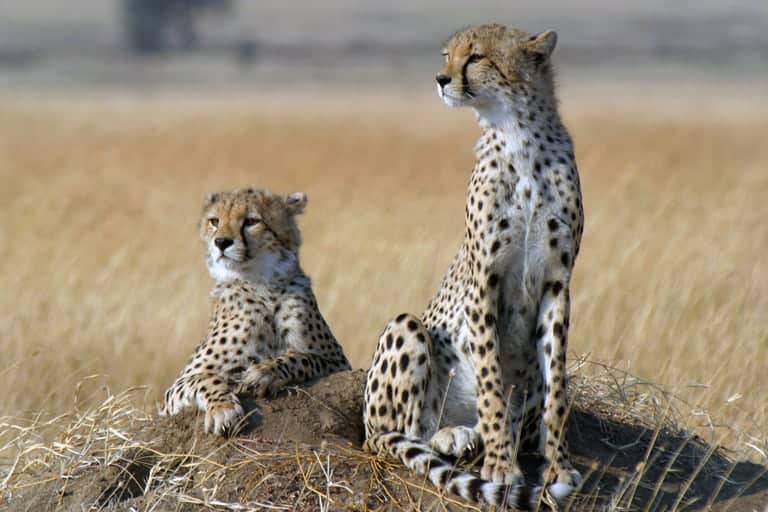 The world’s fastest land animal is speeding toward extinction across much of its range, reports a study published in Proceedings of the National Academy of Sciences.

The study, which was authored by an international team of researchers including biologists from ZSL (Zoological Society of London), Wildlife Conservation Society (WCS) and Panthera, estimates that the planet’s wild cheetah population is down to just 7,100 individuals, a decline of more than 90 percent since the turn of the 20th century.

Cheetah have disappeared across 91 percent of their historic range, with Asian populations going extinct except for one group of about 50 individuals in Iran. In Zimbabwe the population plummeted 85 percent since 2000.

The findings prompted the authors to recommend the cheetah be up-listed from from ‘Vulnerable’ to ‘Endangered’ on the IUCN Red List of Threatened Species, potentially affording the species with greater attention and support.

“This study represents the most comprehensive analysis of cheetah status to date. Given the secretive nature of this elusive cat, it has been difficult to gather hard information on the species, leading to its plight being overlooked,” the study’s lead author Sarah Durant, a researcher with ZSL/WCS who serves as the project leader for the Rangewide Conservation Program for Cheetah and African Wild Dog, said in a press release. “Our findings show that the large space requirements for cheetah, coupled with the complex range of threats faced by the species in the wild, mean that it is likely to be much more vulnerable to extinction than was previously thought.”

“Concerted action is needed to reverse ongoing declines in the face of accelerating land use changes across the continent.”

Cheetah habitat has declined across Africa in recent decades due to conversion for agriculture and the fencing off of once wild areas. At the same time, the species is threatened by the illegal wildlife trade, hunting due to its perceived threat to domesticated animals, and loss of prey species. Complicating the situation, cheetah require large areas of habitat that often fall outside protected areas, putting them at greater risk.

Given those dangers, the authors call for an urgent shift in how conservationists work to protect cheetah, including landscape-level approaches that extend beyond protected areas and national borders.

“We’ve just hit the reset button in our understanding of how close cheetahs are to extinction. The take-away from this pinnacle study is that securing protected areas alone is not enough,” said Kim Young-Overton Panthera’s Cheetah Program Director in a press release. “We must think bigger, conserving across the mosaic of protected and unprotected landscapes that these far-reaching cats inhabit, If we are to avert the otherwise certain loss of the cheetah forever.”

This article was first published by Mongabay.com on 26 Dec 2016.