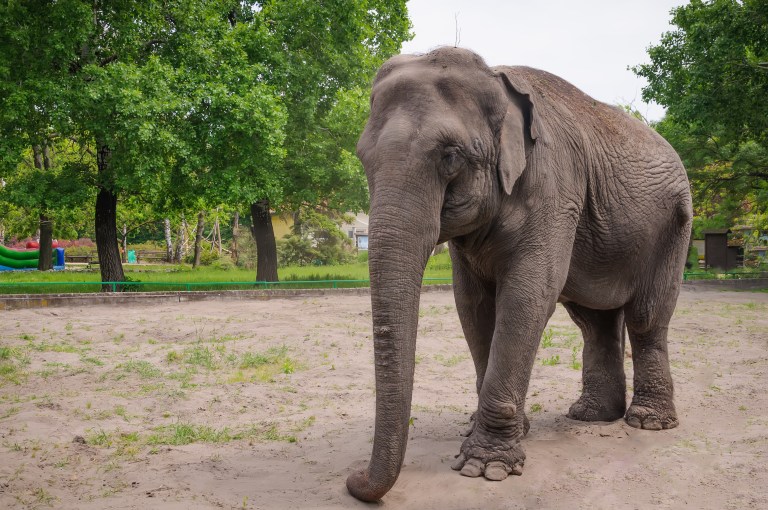 After helping Kaavan, the world’s loneliest elephant, Cher has her sights set on freeing another elephant. As the co-founder of Free the Wild, Cher is encouraging the Edmonton Valley Zoo to free Lucy, an Asian elephant that’s lived in Canada for 40 years.

Cher wrote to Mayor Don Iveson and the Director of Edmonton Valley Zoo, Gary Dewar offering to get an independent expert in to review Lucy’s health. Free The Wild’s vet will be considered to assess Lucy’s condition at an evaluation.

According to Free The Wild, “Born in 1975, Lucy is an Asian elephant who has lived in the sub-artic conditions of Canada for over 40 years. She has never been with another Asian elephant and her only companion was taken away in 2006. Edmonton Valley Zoo’s limited operating times means even the company of humans is few and far between.”

Right now, “She is 1000 lbs overweight and suffers from significant arthritis and foot disease. She has difficulty bearing weight on her back legs and, due to an inappropriate diet, suffers dental issues and painful colic issues which have caused her to collapse – seen lying down, slapping her stomach with her trunk. With no place to swim, no mud in which to wallow or trees to scratch against, Free The Wild aims to work with Edmonton Valley Zoo to find an amicable solution in securing her release. Despite being 45 years old, Lucy has another 15-20 years left of her life.”

Many Trip Advisor reviews of the zoo note the poor state of Lucy the elephant.

One reviewer called it “the worse and most cruel zoo” he has ever visited and another described how “each and every animal is so depressed or sick that even looking at them makes me depressed feeling pity on their miserable fate in small cages” Many reviewers focused on Lucy’s condition and commented about how she looked “depressed” and didn’t have enough room in her enclosure. One reviewer went on to describe her living situation in more detail: “She is kept in a concrete pen with no stimulation, nothing resembling her rightful environment, is arthritic because of the cold. For anyone who actually cares about the welfare of animals, I advise that you stay well away from this place.”

On March 4, 2021, Free the Wild posted an update that their co-founders and the Director of Edmonton Valley Zoo, Gary Dewar, have been in correspondence and their “expert vet’s credentials will be considered to jointly assess Lucy’s condition at her next evaluation.” They also received a letter from the Jane Goodall Institute’s Canada Board Member and VET, Dr. Rick Quinn, with his assessment of Lucy’s health as well as his interactions with Lucy’s veterinarians who believe that Lucy is “well-adjusted” to her circumstances and getting good care. Even so, Free the Wild’s “offer of assistance to send and fund an independent, elephant expert veterinarian stands.”