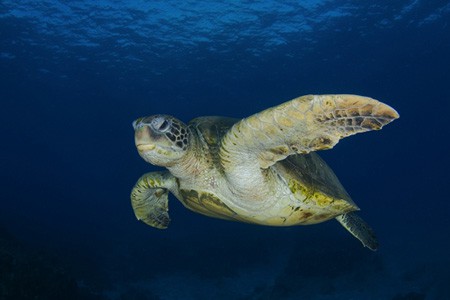 Great news today: The Chilean Government announced its intention to expand the Salas y Gómez marine reserve and to create a smaller reserve in Hanga Roa Bay – the harbor right off the main town and capital of historic Easter Island. This new marine conservation plan for Easter Island is set to be established by the end of the year.

The government also announced the plan to develop an assessment and status report of the main fisheries of Easter Island.

Following an expedition in 2010 to Salas y Gómez Island, led by Oceana, National Geographic, and the Waitt Foundation, the Chilean President announced the creation of the original Salas y Gómez marine reserve. This no-take reserve protects 150,000 square kilometers around the island – an area larger than Greece.

In 2011, Oceana and National Geographic Society partnered with the Chilean Navy and conducted an unprecedented expedition to study the marine area surrounding Easter Island and Salas y Gómez Island to assess their current states of conservation and potential need for new protection measures. Using the baseline study developed from this collaboration, Oceana proposed the expansion of the Salas y Gómez marine reserve, Motu Motiro Hiva, to an area of 411,000 km2, making it the second largest no-take marine protected area in the world.

These marine protected areas can only officially be declared after a referendum is conducted for the people of Easter Island, known as the Rapa Nui, and they give their approval for the proposals.

Easter Island is a UNESCO World Heritage site, famous for its stone statues, called Moai. Salas y Gómez Island is a small uninhabited island 250 miles east of Easter Island in the Pacific Ocean. It was described by Dr. Enric Sala, marine ecologist and National Geographic Ocean Fellow, as one of the last undisturbed and relatively pristine places left in the ocean.

We’re excited to hear that Chile is electing to protect its invaluable marine resources in Easter Island and Salas y Gómez – and we’ll keep you posted as things progress.

This article was written by Emily Fisher and published by Oceana.