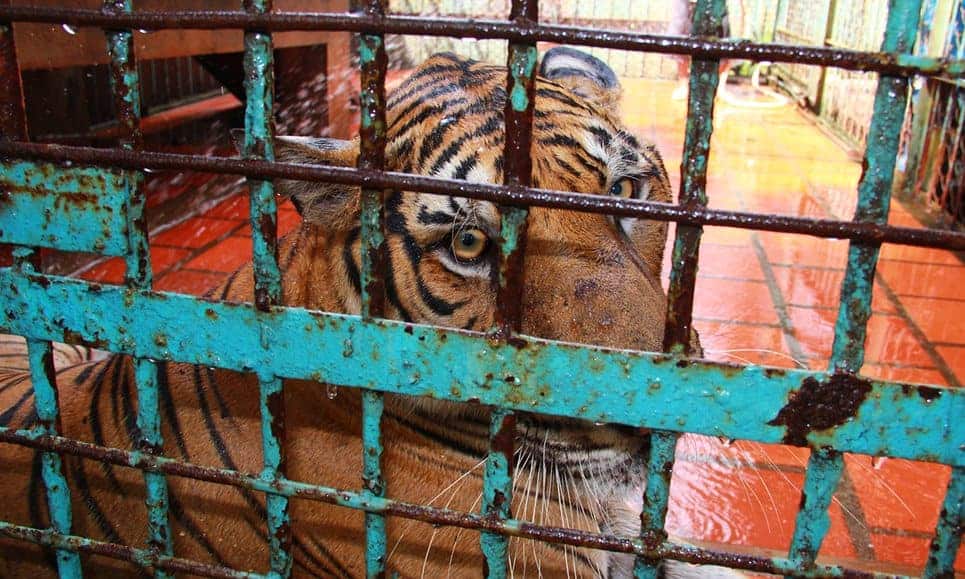 China has been accused of deceiving the international community by allowing a network of farms to breed thousands of captive tigers for the sale of their body parts, in breach of their own longstanding ban on the trade.

The Chinese government has allowed about 200 specialist farms to hold an estimated 6,000 tigers for slaughter, before their skins are sold as decoration and their bones are marinated to produce tonics and lotions.

Campaigners say this has increased demand for the products and provoked the poaching of thousands of wild tigers, whose global population is now down to just 3,500.

China is expected to come under pressure at this week’s Johannesburg conference of nations who have signed the Convention on International Trade in Endangered Species (Cites). The Guardian has found that Chinese delegates have tried to obstruct debate at the conference by rewriting a critical report and questioning the wording of a key decision.

The Chinese say their domestic market is nobody else’s business since Cites covers only international trade. They also point out that by breeding 6,000 tigers in captivity they have significantly increased the population of the species, and question why western countries should be allowed to breed cattle and pigs for their own markets if they are to be criticised for doing so with tigers.

The argument gets to the heart of the debate about whether endangered species have an inherent right to exist in their own habitat, or should be allowed to survive only if they have some commercial value – “if it pays, it stays”. Some poorer nations are pushing hard for a legal right to kill and trade the parts of elephants, rhinos and tigers.

China’s State Council introduced its tiger breeding ban in May 1993 under intense pressure, with the Clinton administration in the US and Cites separately threatening trade sanctions. They closed down 200 factories that had been producing wine from marinated tiger bones. Chinese delegates told a subsequent Cites meeting that it had “banned all internal trade in tiger parts.”

Yet, four months later, China’s State Forestry Administration (SFA), which was responsible for enforcing the ban, approved the opening of the first tiger farm and even invested hundreds of thousands of dollars in its operation before going on to open up a network of similar farms, now estimated by NGOs to number 200.

John Sellar, then a law enforcement officer for Cites, later found that almost every part of the tiger’s body was being linked to some spurious medical benefit: the whiskers to deal with toothache; the eyeballs for malaria and epilepsy; the brain to cure laziness; the nose for childhood convulsions; the fat for haemorrhoids; the collar bone for good luck; the penis for sexual energy; the tail for skin cancer; the feet placed outside a house to frighten bad spirits. And, beyond traditional medicine, the skin had become a prestigious wall hanging for China’s new, wealthy elite.

In 2003, China marked the tenth anniversary of the ban by introducing a new sticker system for licensed animal products that were authorised for sale. A decade later, the Environmental Investigation Agency (EIA) discovered that, having opened the farms, the SFA had been quietly issuing licences for the sale of skins from the tigers that were bred there. The SFA claimed that the skins were only sold to museums and universities for scientific purposes, but the EIA found at least half ended up in the plush apartments of China’s elite.

Facing exposure, the Chinese disclosed that the wording of the State Council’s 1993 ban had been much narrower than its public statements had suggested, and that it applied only to trade in products produced from tiger bones, primarily wine. But, as animal rights campaigners dug deeper, it soon became clear that the SFA were also licensing the sale of tiger bone products. And the profits were huge. The wildlife-tracking NGO Traffic found tiger bone wine selling at $257 for 500ml, while another group, the International Fund for Animal Welfare (IFAW), found one farm alone had a cellar full of vats containing 1.2 million litres, worth an estimated $617m. Wine from marinated tiger penis was even more expensive, at $490 per 500ml. Meat was being sold at $100 a dish; teeth at $660 each; and whole skins for up to $22,000.

Inspired by China’s behaviour, Thailand, Vietnam and Laos also opened tiger farms, some of which were suspected to be not only breeding animals for body parts but also “laundering” wild tigers that had been captured. Wild tigers are close to extinction in Vietnam and possibly already extinct in Laos. China is believed to have only 50.

The issue came to a head in June 2007 at a conference at The Hague. Cites formally made a collective decision– numbered 14.69 – to go beyond its international remit, stating baldly that “tigers should not be bred for trade in their parts” and calling for all tiger farms to cut back their stock to the minimum needed for conservation of the species. Chinese delegates protested loudly that 14.69 was an intrusion in their domestic affairs, argued with the wording and formally noted their objection.

Meanwhile, staff at the Beijing office of IFAW, which had been particularly vocal, became aware of men ostentatiously following them in the street, and the director’s driver reported that some of the men had approached him and asked for detailed reports on the director’s activity.

Minutes from Cites meetings show that since 14.69 was adopted, China has repeatedly quarrelled with its wording; claimed that the decision was not made by consensus; and consistently failed to produce information demanded by Cites about its tiger farms. When 13 heads of government met for the Global Tiger Initiative in St Petersburg in November 2010, the then Chinese premier, Wen Jiabao, called for an end to the tiger trade, yet his delegates joined with those from Thailand, Vietnam and Laos to ensure that the meeting’s final declaration was worded to allow their farms to continue trading.

The effect has been devastating. An analysis by the EIA found that in the 12 years from 2000, law enforcement agencies seized 1,031 tiger carcasses or skins – 90% of which were en route to China. Working on the standard police estimate that just 10% of illicit trade is seized, then somewhere in the region of 10,000 tigers were killed primarily for China’s consumers in this period.

In the buildup to this month’s Cites conference in Johannesburg – and in spite of its track record – China took over the chairmanship of the working group on big cats, and used its position to water down the findings of a report that Cites had commissioned from the International Union for Conservation of Nature (IUCN).

The report, seen by the Guardian, embarrassed China by finding that they had “systematically exercised internal trading privileges for companies dealing in big cat skins and derivatives, produced mainly from captive breeding”. But the Chinese draft stated: “It appears that significant progress has been made by some parties in implementing legislative and regulatory measures to restrict trade in Asian big cat specimens.”

The IUCN report noted that there was no evidence of China having restricted the sale of tiger products to scientific and educational outlets, as they had always claimed; that NGOs had found tiger wine on sale; and that there was some evidence that stockpiles of tiger bone were leaking on to the market. In spite of this and the work of other NGOs, the Chinese draft claimed there had been “no systematic and comprehensive investigation”.

Chinese delegates went on to claim that there had never been a consensus to pass 14.69 in 2007; that there was doubt about the definitions of “trade” and “internal trade”; and that Cites had merely “urged”, not “ordered”, Chinato destroy its stockpiles of tiger bone.

This was poorly received by other members of the big cats working group, and an alliance of the US, the UK and India succeeded in rewriting the draft. The argument is expected to continue in Johannesburg this week.

Meanwhile, in Harbin, north-east China, one of the biggest tiger farms has found a new loophole in the law by cross-breeding tigers with lions. The Chinese say that the sale of “liger” bones is not covered by the 1993 ban.

This article was first published by The Guardian on 27 Sep 2016.

We invite you to share your opinion whether China’s shameful tiger farms should be closed down? Please vote and leave your comments at the bottom of this page:

Disgusting culture! No compassion – cheat, lie all for the $$. As long as there are Chinese wildlife and horrible exotic farms will continue. Only reason they breed Pandas is for the $$.

they are horrible people.

This is wrong in so many ways. Tigers are already Endangered animals, Why put them at risk for cheap products that possibly don’t even have any use to people? Tiger parts, Breeding, Trading, Slaughter, Skins?? This is very sad and Shameful. This isn’t any help for anyone’s use of “Medicines.” No. This is pure out murder.

I have said here many times, that this country CHINA is a deplorable country with it’s citizens not wanting to better itself. All these people care about is money, no compassionate for wildlife of any kind. What is further disturbing is it looks like even the young, educated Chinese just do not give a dam. I look at this country in disgust! I would never spend a dime there.

What is so tragic re the above is that China is doing NOTHING to educate their citizens on the atrocities of wildlife slaughter and exploitation of species. They merely look at the bottom line and continue on with their horrors. What hell tigers and other wildlife have to endure for human greed. Is it not time that we stand together with knowledge, commitment, education and responsibility worldwide and say NO MORE!

I’m glad CITES is coming under fire – they’ve been getting away with murder for years.

If China can’t be trusted on this, why should we trust them on their commitment to curbing global warming and carbon emissions?