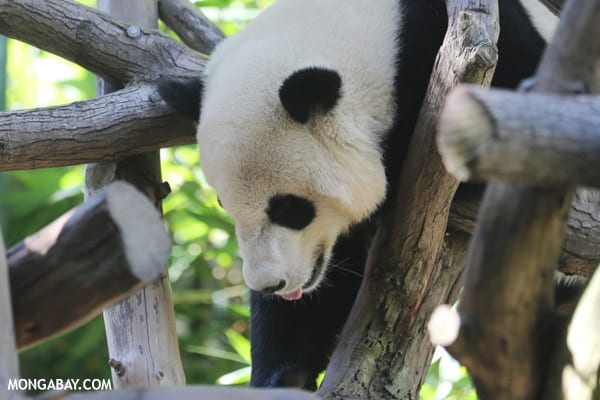 China’s decision to open up collective forest for sale by individuals to outside interests will put 345,700 hectares or 15 percent of the giant panda’s remaining habitat at risk, warns a letter published in the journal Science.

The letter, authored by a team of researchers including scientists from Conservation International and Chinese institutions, says that China’s land tenure reform will open key panda habitat to logging and conversion by allowing collectively-owned land to be transferred or leased to commercial enterprises. The letter cites a recent case where a timber company purchased 15,000 ha of forest in Chongqing Province.

“This change puts these vital habitats potentially under threat from commercial logging, increased collection of firewood and non-timber forest products by outside enterprises, and other commercial development activities,” said co-author Russell Mittermeier, a biologist who serves as President of Conservation International (CI), in a statement. “Sadly, it would threaten to deforest, degrade or disturb up to 15% of the remaining giant panda habitat.”

“The reform contradicts the great steps the Chinese government has taken to conserve the giant panda in recent decades,” added Li Zhang, a scientist with Conservation International China. “The government has designated 63 panda reserves which constitute over 60% of the panda’s remaining wild habitat, improved the species’ endangered habitats by reforesting or restoring native forests and restricting human access to these, increased the number and capacity of forestry staff in these areas, strictly banned hunting of the species, and pioneered captive breeding techniques. As a result of these efforts, the official number of giant pandas in the wild has increased to nearly 1,600 from less than 1,000 in the late 1980s. It would be inexcusable to reverse this great achievement for these majestic creatures and our country’s recent conservation efforts.”