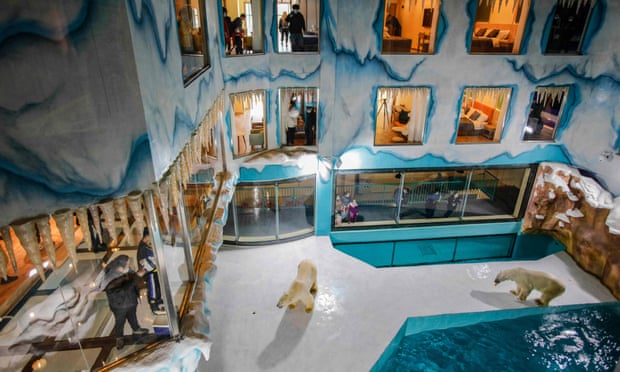 A Chinese hotel built around a central polar bear enclosure for the non-stop viewing pleasure of its guests has opened to immediate condemnation from conservationists.

At Harbin Polar Land in north-east China, the hotel bedrooms’ windows face onto the bears’ pen, with visitors told the animals are their “neighbours 24 hours a day”.

A video shows the bears – a threatened species – being photographed by crowds of guests under harsh warm lights, in a space consisting of fake rocks and icicles and a white painted floor.

“Polar bears belong in the Arctic, not in zoos or glass boxes in aquariums – and certainly not in hotels,” said Peta Asia’s vice-president, Jason Baker.

In the wild, polar bears usually roam territories that can span thousands of miles, Baker added.

Harbin is famous for its ice-carving festival, and the hotel resembles a giant igloo, its roof topped with artificial ice. But some Chinese social media users expressed unease at the theme being taken to this extreme.

“A panoramic prison for polar bears … Haven’t we learned anything about animal cruelty?” one commentator said.“Gaps in China’s wildlife protection law allows businesses to exploit animals without any concern for their welfare,” a spokesman for China Animal Protection Network, who declined to be named, told AFP.

Chinese authorities recently changed the law to ban the consumption of wildlife for food, after speculation over the origins of the coronavirus nudged investigators towards a Wuhan market where live animals were for sale.

But the use of parts of endangered species in traditional medicine remains rampant, and Chinese circuses and zoos are often criticised for poor standards of animal housing and care.

This article was first published by The Guardian on 12 March 2021. Lead Image: Hotel guests watch the polar bears in their enclosure at the hotel in Harbin, China. Photograph: AFP/Getty.