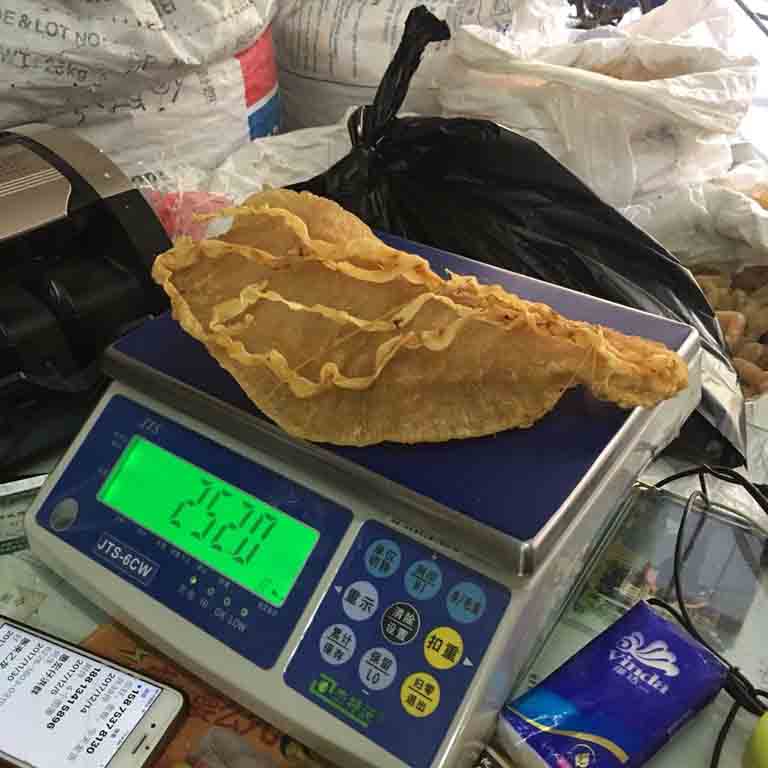 According to a report this week by Quartz, two Chinese nationals were arrested last month in the state of California with $3.7-million-worth of totoaba swim bladders that they had smuggled from Mexico.

Quartz’s Justin Rohrlich writes that a sheriff’s deputy in Orange County, California initially pulled the two men, Yikang Liang and Haoyu Huang, over for speeding, but quickly came to suspect they might be up to something more serious:

The men said they had lived in Mexico for years, but neither could answer questions in basic Spanish. And the three large boxes in the back of the van seemed inconsistent with the story they were telling. Liang and Huang had entered the United States from Mexico in separate vehicles two days earlier, 17 minutes apart. The deputy began to suspect they might be drug smugglers. He called for backup, then had his police dog sniff around.

The boxes did not contain drugs, of course. They were packed with 132 dried totoaba swim bladders, which can fetch anywhere from $20,000 to $80,000 per kilogram and has come to be known as “aquatic cocaine.”

The swim bladders being transported by Liang and Huang weighed a little over 100 pounds, meaning they could have been sold for somewhere between $940,000 and $3.76 million.

Despite having no proven health benefits, totoaba swim bladders or “maws” are highly prized by practitioners of traditional Chinese medicine. But the gillnets used to catch totoaba in Mexico’s Sea of Cortez, also known as the Upper Gulf of California, frequently ensnare vaquita, the world’s smallest porpoise, causing them to drown.

This has caused such a precipitous decline in the vaquita population in the Sea of Cortez — the species only known range — that gillnets have been banned by the Mexican government.

The ban hasn’t stopped the cartels that have taken over the illegal totoaba maw trade, however, and the vaquita’s decline continues. By some estimates, there are only 10 vaquita left in the world.

More than 800 totoaba maws were confiscated by Mexican authorities last year in two separate busts of Chinese nationals who were attempting to smuggle the swim bladders out of the country. The 65.5 pounds of totoaba swim bladders recovered would have been worth more than $650,000 in Chinese markets. Also last year, Chinese customs officials confiscated 980 pounds of totoaba maws, estimated to be worth as much as $26 million.

These types of enforcement actions are welcome news, Andrea Crosta, executive director of wildlife trade watchdog group Elephant Action League wrote in a commentary for Mongabay earlier this year. But he added that, without further action to directly disrupt the totoaba maw supply chain and the operations of the wildlife crime networks involved in the illegal trade, there is “absolutely no chance” to save the vaquita.

“According to our sources on the ground in Baja California, recent arrests of totoaba traffickers in China and pressure on the Chinese traders in Mexico are beginning to have an effect on the illegal totoaba supply chain,” Crosta wrote. “This is the most important news for the vaquita, the world’s smallest and most threatened porpoise, in years, and a result of — and proof that — intelligence activities and law enforcement can disrupt these criminal enterprises and significantly slow their illegal operations. Intelligence operations produce results.”

No criminal charges have yet been filed against Yikang Liang and Haoyu Huang, Rohrlich reports, and the investigation is ongoing: “A judge signed off on the search warrant on June 4, which will give investigators the chance to more closely examine the men’s phones. This could shed light on any larger operation that might exist, including names of suppliers and buyers.”

This article by Mike Gaworecki was first published on Mongabay.com on 21 June 2019.