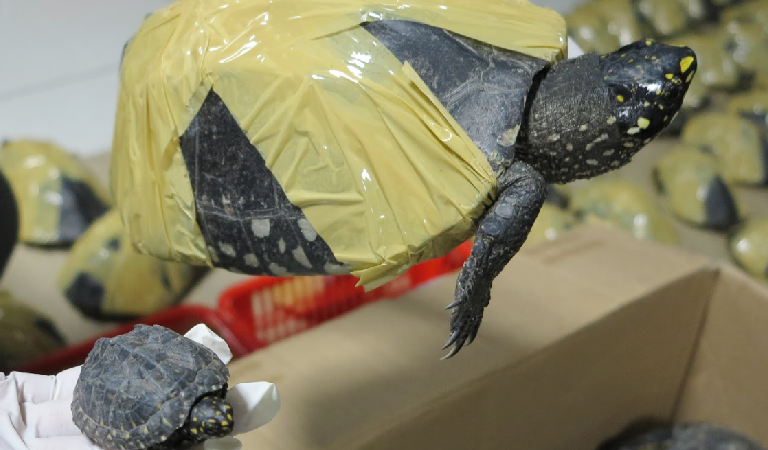 SINGAPORE — Special economic zones set up to promote trade between China and its Southeast Asian neighbors are facilitating a black-market trade in wildlife products, according to watchdog group TRAFFIC. Tens of thousands of prohibited wildlife parts and products are being sold across open and unregulated markets in five Southeast Asian countries, with a significant portion of trade activity coming from special economic zones, the group’s latest market surveys reveal.

From 2019 to 2020, TRAFFIC surveyors visited more than 1,000 outlets in select towns and cities across Laos, Thailand, Vietnam, Myanmar and Cambodia. From pangolin scales to helmeted hornbill pendants, they counted close to 78,000 wildlife parts and products displayed in the two-year period. More than 70% of individual items sold were derived from elephants, in particular ivory products.

“The variety and prevalence of illegal wildlife trade in several locations emphasized that the circumstances facilitating illegal trade have not only remained but, in some cases, proliferated,” Maniam said in a press statement.

Among these locations are special economic zones set up by local firms and Chinese businesses, such as Boten and Bokeo in Laos, and Sihanoukville in Cambodia, TRAFFIC highlighted. While these zones exist to facilitate trade, investment and economic growth, their special business laws and focus on open trade have also contributed to flourishing illegal wildlife operations, Maniam said.

A large part of the demand for prohibited wildlife products in these regions comes from Chinese tourists, experts say. Before travel bans ground arrivals to a halt, some 20 million Chinese tourists were visiting the five Lower Mekong countries yearly. The flood of tourist dollars they had been bringing for years before that had shaped the development of special economic zones like Boten, Bokeo and Sihanoukville, transforming them into casino boomtowns. Pre-pandemic, Chinese tourist spending had also been driving wildlife trade in the region, according to K. Yoganand, regional lead for wildlife and wildlife crime at WWF Greater Mekong, who is based in Laos.

When China shut down the ivory trade within its borders in 2017, the trade within the greater Mekong region became “more prominent,” Yoganand said. “There are a lot of Chinese tourists, so even if a small proportion buys ivory and other wildlife products, that’s still a huge volume.” Demand for ivory has gone down within China since the 2017 ban, “but tourists still come out to other regions where the trade happens,” he added. “And they drive the trade with their purchases.”

Though trade activity has abated in the past year, with cross-border restrictions limiting travelers and making it more difficult for traders to continue importing illegal wildlife products, the post-pandemic impact on regional wildlife trade remains to be seen.

“People are a lot more aware now, they’re seeing this connection between wildlife trade and the pandemic. So we’re hoping at least some of the opportunistic buyers will avoid wildlife purchases in future,” Yoganand said. “But of course, a lot of this trade is also about marketing. The traders, smugglers and traffickers are going to respond and they might come up with new products and marketing techniques to increase [sales]. That might balance out some of the positive things happening and we have to be watchful.”

“It would be naïve to think that the pandemic alone will dampen wildlife crime in the long term,” Kanitha Krishnasamy, director for TRAFFIC in Southeast Asia, said in a press statement. “Monitoring and investigations must continue. Ground-truthing is critical to accurately understand how traffickers, traders and consumers respond and adapt to changes.”