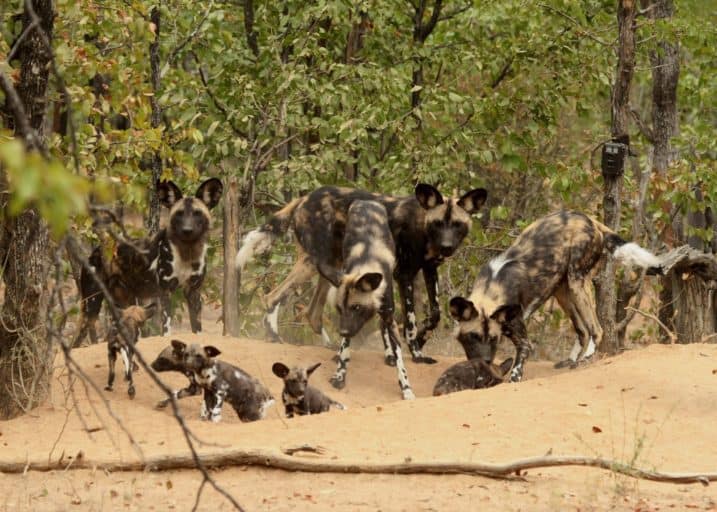 New research suggests that African wild dogs’ chances of survival might be dealt a serious setback as global temperatures continue to rise. The African wild dog (Lycaon pictus), a native of sub-Saharan Africa, is listed as Endangered on the IUCN Red List, which reports that there are only an estimated 6,600 adults in 39 subpopulations left in the wild — and that their numbers continue to decline due to ongoing habitat fragmentation, conflict with humans, and infectious disease.

Compounding these threats to the species’ survival, according to a paper published in the Journal of Animal Ecology yesterday, climate change appears to be increasing the mortality rate for African wild dog pups.

Researchers with ZSL (Zoological Society of London), the Botswana Predator Conservation Trust, and the African Wildlife Conservation Fund monitored 73 African wild dog packs in Botswana, Kenya, and Zimbabwe through the use of tracking collars. They discovered that the packs spend less time hunting in hot weather. They also found that more pups died as the days got hotter, which they theorize is because, simply put, decreased hunting time means less food to feed the young.

In Botswana, for instance, where the researchers monitored African wild dog packs for the past 24 years, the average daily maximum temperature during the pup-rearing season increased one degree Celsius over the course of the study period. At the same time, the researchers observed a drop in the average number of pups surviving in each pack, from five to three.

African wild dogs are not a species typically seen as possessing traits that would make them particularly vulnerable to the effects of a changing climate, the researchers write in the study. That makes their findings all the more important.

“Our study shows the truly global impact of climate change,” Rosie Woodroffe of ZSL’s Institute of Zoology and the study’s lead author said in a statement. “When most people think about wildlife in a changing climate, they think of polar bears clinging to melting ice, but even species who have adapted to tropical weather are being impacted by the changes to their environment.”

Woodroffe added that she and her team are now focused on identifying conservation interventions that might help mitigate the impacts of global warming on African wild dogs and determining where those efforts will be most effective.

It’s estimated that there may be as few as 700 packs of African wild dogs left in the wild, and they’ve all been forced into a tiny fraction of their original territory as human populations have encroached further into rural areas.

A study published last week that looked at range contractions for the world’s large terrestrial carnivores found that the vast majority of them — 80 percent — have seen their global territory shrink by 20 percent or more. The African wild dog was one of the hardest hit in this regard, having lost some 93.2 percent of its historical range.

The authors of the Journal of Animal Ecology study note that other large carnivores in Africa are unlikely to suffer the same impacts due to climate change, or at least not to the same degree as African wild dogs: “These impacts of high ambient temperatures on wild dogs reflect their largely diurnal activity pattern, and probably their cursorial hunting habit. Other large African carnivores may be less affected because they are more nocturnal (lions, leopards, hyaenas) or engage in short daytime hunts which do not lead to over-heating.”

There are viable populations of the dogs in several national parks and game reserves, particularly in East Africa and in Southern Africa. Despite numerous successes in preserving biodiversity and habitat, however, protected areas aren’t impervious to the effects of climate change.

“Worryingly, this new threat may be affecting wild dogs deep inside wildlife areas where we would expect them to be protected from human impacts,” she said. “With habitat fragmented and destroyed in cooler areas, wild dogs have literally nowhere to go. Sadly, climate change may bring extinction a step closer for this amazing species.”

This article by Mike Gaworecki  was first published on Mongabay.com on 20 Jul 2017.