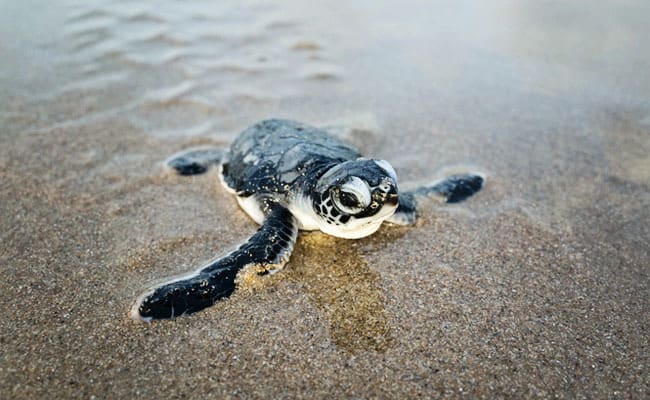 Australia’s iconic Great Barrier Reef is home to one of the largest populations of green sea turtles on earth, but warming temperatures there linked to climate change are having a bizarre and worrying impact on them – they’re turning an alarming number of hatchlings female.

Unlike most animals, genetics don’t determine the sex of sea turtles. Instead, the temperature of the eggs while they’re incubating does, in what’s otherwise known as temperature-dependent sex determination.

The warmer the temperature, the more likely it is that developing embryos will be female, and it only takes a few degrees to make a difference.

According to a new study, which was just published in the journal Current Biology, warming temperatures are skewing the sex ratios at an alarming rate in the Great Barrier Reef, and that’s a big problem.

For the study, scientists collected blood and skin samples from two genetically distinct populations of green sea turtles, which allowed them to figure out individual sex, in addition to where they were born.

When those results were combined with temperature data taken since 1960, they found that green sea turtle rookeries have been producing mostly females for more than two decades, and estimated that a completely female population is possible in the near future.

Scientists added in the study that with temperatures predicted to increase by several degrees in just a few generations of turtles, they’ll have very little time to adapt to a rapidly changing climate. While their population size may seem fine now, and a few males can fertilize a lot of females, the growing lack of males could ultimately lead to their extinction.

“This research is so important because it provides a new understanding of what these populations are dealing with,” said Dr. Michael Jensen, lead author of the study from the National Oceanic and Atmospheric Administration. “Knowing what the sex ratios in the adult breeding population are today and what they might look like 5, 10 and 20 years from now when these young turtles grow up and become adults is going to be incredibly valuable.”

They hope to learn more about how species who have temperature dependent sex determination are dealing with climate change, in order to implement the most effective conservation strategies.

The good news is that there’s still time to help sea turtles in the Great Barrier Reef, and in other places where they may need even more help. The young females are still years away from reaching an age where they’ll reproduce, and measures can be taken now to help them, such as shading key spots on beaches where they nest.

“Finding that there are next to no males among young northern green turtles should ring alarm bells, but all is not lost for this important population,“ said World Wildlife Fund-Australia CEO Dermot O’Gorman. “Scientists and wildlife managers now know what they are facing and can come up with practical ways to help the turtles.”