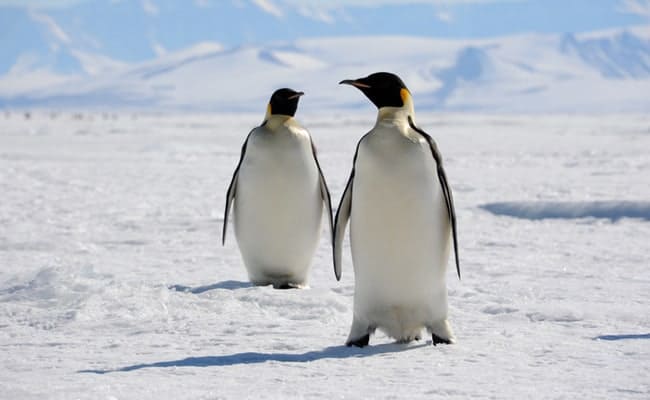 As climate change continues to impact habitats, some animals can survive by moving to new areas. But Antarctica’s Emperor penguins may not have that luxury, according to researchers.

According to a study that was led by researchers from Woods Hole Oceanographic Institution (WHOI), moving may help them in the short term, but as sea ice continues to deteriorate, the existing colonies of Emperor penguins are going to face devastating declines by the end of this century.

“We know from previous studies that sea ice is a key environmental driver of the life history of Emperor penguins, and that the fifty-percent declines we’ve seen in Pointe Géologie populations along the Antarctic coast since the 1950s coincide with warmer climate and sea ice decline,” said Stephanie Jenouvrier, WHOI biologist and lead author of the study. “But what we haven’t known is whether or not dispersal could prevent or even reverse future global populations.”

Researchers note too little sea ice means penguins lose breeding and feeding grounds, while too much means they have to travel farther to hunt, which reduces the amount of food chicks are being fed.

It wasn’t until recently that satellite imagery and genetic studies revealed that they are moving to find new habitat, which confirmed their ability to migrate to new areas that provide better living conditions.

To see if this could help the 54 known colonies of Emperor penguins survive, researchers built models using data that included penguin dispersal distance, behavior and rate of migration, in addition to sea ice forecasts from climate projection models to see what their fate would be, and it wasn’t good.

“We saw sustained populations through 2036, at which point there was an ‘ecological rescue’ that reversed the anticipated decline expected without dispersion for about a ten-year period,” Jenouvrier explained. “During that time, the penguins made wise choices in terms of selecting the highest-quality habitat they could reach. But the ‘rescue’ was only short-lived, and started plummeting in 2046. When we averaged out all the scenarios, the model painted a very grim picture through 2100, regardless of how far penguins traveled or how wise their habitat selections were.”

Researchers are hoping their work will influence the U.S. Fish and Wildlife Service, which is currently conducting a status review of Emperor penguins to determine whether to list them under the Endangered Species Act.

They add that protection could help in a number of ways that range from changing fishing regulations in the Southern Ocean and raising public awareness about the plight of these iconic animals to highlighting the need for a global conservation plan and increasing the number of studies on Emperor penguins.

“Based on this study, we conclude that the prospects look grim at the end of 2100, with a projected global population decline as low as 40 percent and up to 99 percent over three generations. Given this outlook, we argue that the Emperor penguin is deserving of protection under the Endangered Species Act,” said Jenouvrier.