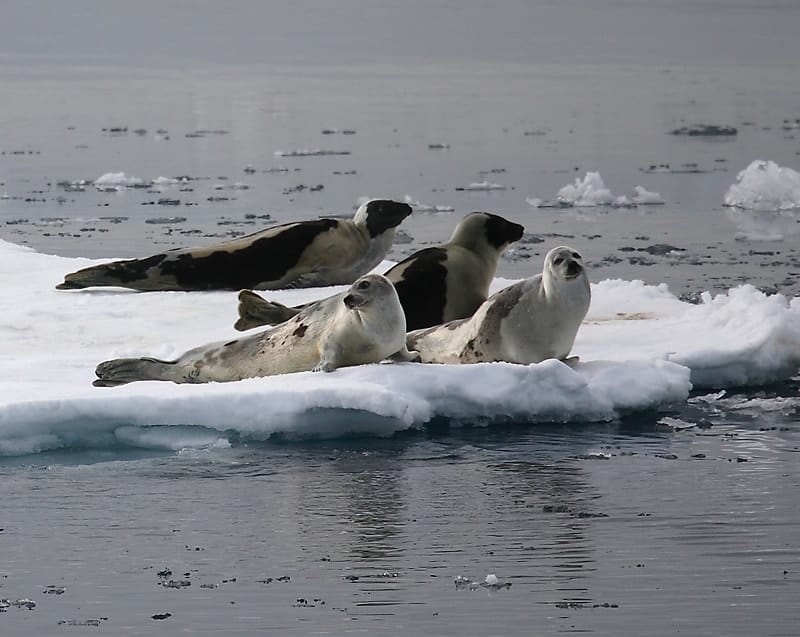 Warming oceans and melting sea ice may have a major impact on harp seals, the doe-eyed animals that are the prime target for Canada’s annual seal hunt. Researchers from Duke University in the US found that sea ice in the seals’ breeding grounds has shrunk by about 6% per decade over the last 30 years.In some recent years, they say, entire years’ broods of cubs may have died. The species is abundant; the Duke team says its future depends on how it can adjust to new climatic conditions.

“Most studies of Arctic sea ice and climate change have focused on the annual ice minimum in September,” said Duke’s David Johnston, who led the new study, reported in the journal PLoS One. “But these animals use seasonal sea ice in February and March, and very few studies have been done on what’s happening to that.”

The most important breeding region lies along the Gulf of St Lawrence on Canada’s eastern coast, extending northwards along the Front, a region off Newfoundland. In 2007, a Canadian government report concluded that mortality had been “extremely high” in the southern gulf because of very poor ice conditions. It also noted that poor ice had been seen in 1998, 2000, 2002, 2005, 2006 and 2007.

Harp seals also breed routinely in the White Sea, an inlet in the Russian north-west. The Duke researchers were able to show that mortality of seal pups, as measured by strandings, has historically varied with February and March sea ice extent as measured by satellite.

It has also varied with the North Atlantic Oscillation (NAO), a naturally occurring climate cycle – which makes intuitive sense as the NAO also affects ice. Opposite phases of the NAO alternately benefit either the Canadian or Russian populations.

Genetic studies indicate some mixing between the two, indicating that some of the seals can move between the breeding grounds. And recently, scientists have reported seeing breeding groups on coastal ice around areas of Greenland where they have not traditionally bred, which may indicate a capacity to move northwards as the overall climate of the sub-Arctic warms up.

A move northward could bring more regular contact with polar bears, the Arctic’s top predator. Dr Johnston regards this research as a stepping-stone to further work that could answer questions about the harp seal’s prospects.

“One of the interesting and powerful things is that we can get ahead of the game,” he told BBC News. “If we want these animals to persist, we’re ahead in understanding how climate might affect their population – and it’s very rare to have that opportunity.”

The US National Snow and Ice Data Center, which co-ordinates measurements of Arctic sea ice, shows that during the current winter the ice-covered area has been virtually identical to that seen in 2007-8, the smallest in the satellite record dating back to 1979.

It is interesting to know if wildlife tourism contributes to the melting of the ice.