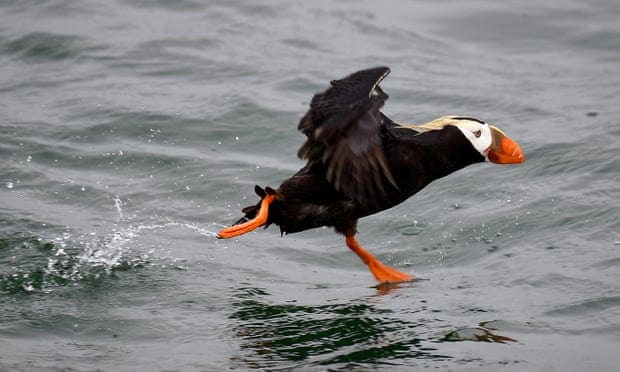 The death of thousands of tufted puffins in the Bering Sea may have been partly caused by the climate breakdown, according to a study.

Between 3,150 and 8,500 seabirds died over a four-month period from October 2016, with hundreds of severely emaciated carcasses washed up on the beaches of the Pribilofs Islands in the southern Bering Sea, 300 miles (480km) west of the Alaskan mainland.

Researchers believe the birds died of starvation partly caused by a loss of energy-rich prey species, which was triggered by increased sea and atmospheric temperatures, as well as reductions in winter sea ice recorded since 2014.

Tufted puffins breeding in the Bering Sea feed on fish and other marine invertebrates, which in turn feed on plankton. The loss of nutritious prey species caused by the climate crisis is also affecting populations of the Atlantic puffin around Britain and Iceland.

Researchers in the journal Plos One documented the Bering Sea “wreck”, or mass die-off, with the help of a citizen science programme in which tribal and community members on St Paul Island recovered more than 350 carcasses of adult birds in the process of moulting, a vulnerable moment in the bird’s lifecycle when they require plentiful food. 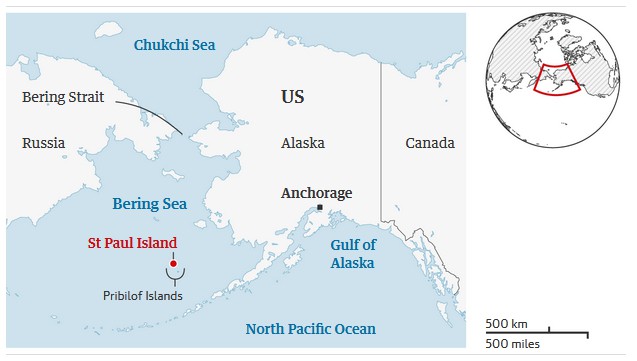 According to the study, by Timothy Jones of the citizen science Coasst programme, at the University of Washington, and Lauren Divine, from the Aleut community of St Paul Island’s ecosystem conservation office, puffins typically made up fewer than 1% of recovered carcasses in the region in previous years.

In this die-off, 87% of carcasses were puffins, with the remainder being the crested auklet, another North American seabird.

Puffins spend much of their lives at sea, only returning to land to breed each spring. Similar reductions in food supplies close to traditional breeding grounds are also pushing Atlantic puffins further north.

It is predicted Atlantic puffins are unlikely to be seen south of the northernmost islands of Scotland by the second half of this century.

A seabird wreck along the Atlantic coasts of Britain, Ireland and Spain after the storms of 2013-14 resulted in the deaths of at least 54,000 birds, of which 55% were Atlantic puffins.

The long-term impact of such events is not well understood but fewer than 60% of 2013’s breeding adults returned to the small Welsh island of Skomer the following year.

Divine said the documentation of the Bering Sea die-off would not have been possible without the carcasses and observations collected by the citizen science group, which has been surveying seabirds for 17 years.

“Island residents collected high-quality data in real time and provided Coasst with a detailed context for their analysis,” she said.

“Without the positive and mutually beneficial relationship built over years of collaboration, this massive die-off of tufted puffins would have gone unreported in the scientific community.”

This article was first published by The Guardian on 29 May 2019.