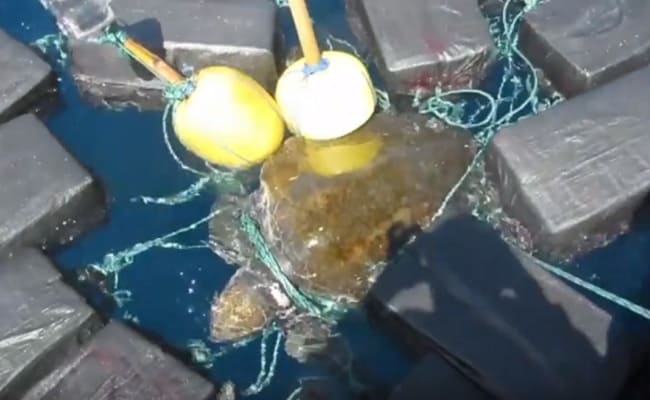 A military plane happened to be in the right place at the right time in November when its occupants spotted debris floating in the Pacific Ocean off the coast of Central America. They notified the U.S. Coast Guard.

A Coast Guard crew aboard the cutter Thetis dispatched a small boat to sail over to the debris field and inspect it.

Imagine the shock of Ensign Mark Krebs, the pursuit mission commander, and his crew aboard the boat when they discovered 26 bales of cocaine tied to 75 feet of fishing line – with a sea turtle entangled in the middle of it. They notified the commanding officer and then quickly went to work to save the turtle’s life.

The poor sea turtle had been trapped for at least a day. The fishing line was wrapped around its fins and neck, causing significant chafing to its skin. As you can see in this video, a Guardsman was able to successfully use a knife to cut through the line and free the turtle, which swam away.

Along with 1,800 pounds of cocaine worth about $53 million, the crew gathered up the fishing line so no other priceless marine life would become entrapped in it.

The cocaine had likely been tossed overboard by smugglers. “They probably felt the heat coming and got rid of it,” Commander Jose Diaz told NBC News. His crew was participating in Operation Martillo, a U.S., European and Western Hemisphere effort that targets drug trafficking routes along the coast of Central America.

The Thetis and its turtle-saving crew returned to Key West Dec. 17 at the end of its 68-day Eastern Pacific counter drug patrol. Along with saving the sea turtle’s life during this patrol, the combined efforts of this crew along with other Coast Guard teams “eliminated nearly7 tons of illicit narcotics with a street value of over $135 million that pose a threat to national security and regional stability,” according to a press release.

There’s currently an opioid abuse epidemic in the United States that was declared a national health emergency by the U.S. Department of Health and Human Services in October. In December, the Centers for Disease Control and Prevention made the grim announcement that in 2016 there was “more than an exponential increase” in opioid overdose deaths, which surpassed the number of deaths from breast cancer.

At the same time, cocaine use is also on the rise in the U.S. after dropping between 2009 and 2013, according to a Drug Enforcement Administration (DEA) report published in October.

“This increase is due to elevated levels of coca cultivation and potential pure cocaine production in Colombia, the primary source for cocaine seized in the United States, which may indicate more cocaine is available for traffickers who want to invest in the U.S. cocaine market,” the DEA wrote.

It’s not unusual for sea turtles and other marine life to become entangled in fishing line. In June, four feet of the line was surgically removed from the stomach of an endangered Kemp’s ridley sea turtle that swallowed it after becoming entangled in South Carolina.

The Coast Guard didn’t mention it, but this may have been the first time a sea turtle has had to be freed from jettisoned drugs – and, hopefully, it will be the last.