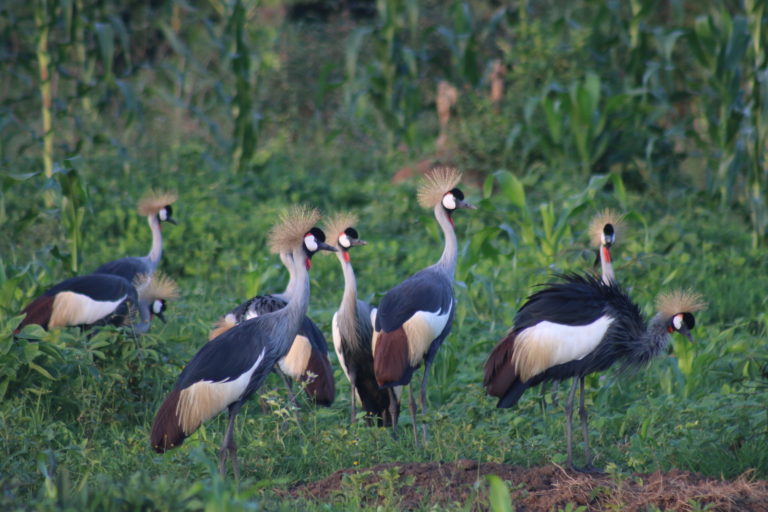 KABALE DISTRICT, Uganda — Ten years ago, grey crowned cranes (Balearica regulorum) had become a rare sight along the highway connecting the Ugandan capital, Kampala, to Rwanda. Across the birds’ entire range in East and Southern Africa, the cranes’ populations had declined steeply. But efforts to restore their wetland habitats in Uganda are succeeding, and birds and local communities alike are benefiting.Jimmy Muhozi Muhebwa first surveyed Uganda’s grey crowned crane population between 2001 and 2003 as research for his Masters thesis.

“We found out in 2003, through counting and then using computer modeling, that Uganda had 10,000, plus or minus 500, grey crowned cranes — but reducing,” Muhebwa told Mongabay.

When Muhebwa and his team surveyed the population in 2013, the numbers seemed to have stabilized.

The cranes are Uganda’s national bird, appearing on the country’s flag and the coat of arms, and Muhebwa’s surveys coincided with a dawning realization of the threat to the species across its whole range.

These beautiful birds, with their distinctive golden crowns, make their homes in a range of habitats including marshes, temporary pools, and pans or dams with tall vegetation.

They prefer wetland areas with open grasslands or farmland nearby where they can forage for seed heads, tender new grass, or grains and pulses. The cranes also eat insects, frogs, crabs, and lizards.

B. regulorum was listed as a species of “least concern” right into the mid-2000s, when a reassessment of its abundance found its numbers had fallen by more than half in the preceding 20 years.

Their steep decline is linked to the loss of wetland breeding areas as growing human populations sought out new farmland and pastures for cattle. Elsewhere wetlands were affected by drought or the construction of dams, or polluted by pesticide run-off.

Jeconious Musingwire, an environmental scientist with Uganda’s National Environmental Management Authority (NEMA), says Muhebwa’s findings matched a massive loss of crane habitat across the country. Uganda has lost over 40% of its wetlands since 1994, according to the ministry of water and environment.

“Loss and degradation of wetlands, climate change and altering of landscapes for human settlement destroyed habitats for their breeding,” said Musingwire.

Population growth also mean cranes are living closer to settlements, facing more frequent disturbances and more vulnerable to hunting. In some places, cranes are targeted because the birds can damage crops such as young maize.

“Crested crane is one the birds that people do sell at the international level. For instance last year we arrested people with three of them,” he told Mongabay. Grey crowned cranes are in demand as domestic birds in Asia and the Middle East. Within Uganda, they are also sought after for traditional medicine.

“They had disappeared because farmers destroyed the wetland,” said Vincent Namara, “but when they were chased away from it, cranes came back.”

For the past 20 years, Namara has been harvesting grass from the Rucece wetland to sell as mulch to farmers in the southwestern district of Mbarara.

All wetlands in Uganda are protected by government, although people often illegally occupy them, draining portions to make way for gardens, farms and settlements. Rucece is part of 202 hectares (500 acres) of wetlands restored by NEMA in this part of the country. The authority evicted encroachers and left the wetlands to regenerate.

NEMA has also encouraged farmers to plant millions of calliandra trees (Calliandra calothyrsus) on their own land. Musingwire explains that these trees help farmland retain water, enrich the soil, and provide fodder, reducing pressure on wetlands.

Since 2003, Muhebwa has been working with communities living around wetlands to protect the cranes and their habitat. He set up the Cranes and Wetlands conservation project, which draws communities into actively restoring wetlands while developing alternative livelihoods.

“We help them start alternative projects such as rearing of pigs, goats and chickens so that they stop encroaching on wetlands,” says Muhebwa.

These incentives are key to curbing unsustainable agricultural land use, and Cranes and Wetlands takes great care to design them in close cooperation with communities themselves. It takes six or seven months to draw up a conservation agreement after a group approaches the project.

First, a check that the groups is registered with local authorities, and then they undergo what Muhebwa calls a feasibility assessment: what are their objectives? What do they get from the wetland currently? Will the group’s members really be able to withdraw from the wetland and implement the agreement?

“They tell you what they want, you tell them what you want, and when you have agreed then you have a function [ceremony] where you sign the agreement. That binds them to the activities and binds you, as the conservation investor, to give them the benefits on agreed times and portions,” said Muhebwa.

In the western district of Kabale, the Cranes and Wetlands Project signed an agreement with a farmers’ group, the Kibuga Barihamwe Association in 2016. John Zinkubire, head of this group of 36 households, told Mongabay they were given 7 million Ugandan shillings (1,900 dollars), which the association used to set up a revolving funds to make loans to its members.

“Farmers were extensively farming in this wetland,” said Zinkubire, “but when we received this money, we stopped and re-planted papyrus reeds on the remaining land. 100 hectares have now been restored and the cranes are back.”

The group’s members have borrowed from the fund to invest in various things. Some have invested it in more profitable farming of crops like potatoes, beans, and cabbage to sell locally and further afield, while others have used the credit to set up small businesses such as retail shops.

According to Zinkubire, the initiative has made it easier for them to borrow money where members previously struggled to find collateral to borrow from commercial banks. The association and its members have managed the money well: the fund has grown to just over 5,200 dollars.

“This financial year, Muhebwa is giving us 23 million shillings (6,300 dollars) more for the project,” said Zinkubire. “The money has not been disbursed yet, but we made an agreement with him.”

So far, over 100 hectares of wetlands have been restored under this project in Kabale, and a further 20 hectares in Lwengo area, according to Muhebwa.

The restored wetlands are now being used by the crested cranes for feeding and breeding. Other birds and animals, including the endangered sitatunga antelope, have also returned to these wetlands.

The project has signed four conservation agreements and is in process of signing six more. Most groups have asked for money to support revolving funds like the Kibuga Barihamwe Association’s. The amounts granted have depended on the group’s capacity, but range between 1,600 and 6,800 dollars.

“There is a group we are going to give 25 million shillings (6849 USD) because it is a big group; it has the capacity to use the money,” said Muhebwa.

The Cranes and Wetlands Project raises money from international donors. The initial funding came from the cash prize of $30,000 awarded to Muhebwa by the Whitley Fund for Nature in 2010 . In November, the same organization made another grant of 35,000 pounds ($45,000) to the project. Cranes and Wetlands has also received support from the International Crane Foundation.

The Cranes and Wetlands conservation project measures its success in terms of how many pairs of crested cranes are breeding in a year and their breeding success.

“We find out that the breeding success now is going towards two young chicks per pair that goes into breeding. It used to be even lesser,” Muhebwa told Mongabay.

“We are seeing more young ones being born and getting into maturity than what it used to be,” he said. “When we conduct the next census in about two or three years, we will get to around 10,000 grey crowned cranes and we will say thank you God, we have done some good work.”

This article by Fredrick Mugira was first published on Mongabay.com on 24 December 2019.