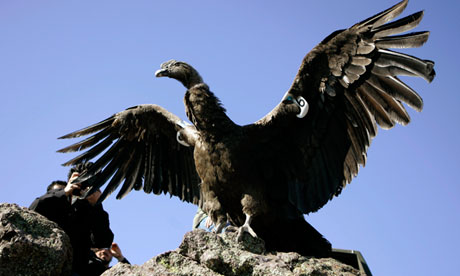 Chilean authorities are investigating the apparent poisoning of 20 condors in the Andes. Two of the afflicted birds have died, authorities revealed on Monday. The enormous birds have wingspans of up to 10ft (3m) and can glide on air currents for hours.

On Sunday, witnesses reported condors crashing into the rocks high in the mountains near a hydroelectric power plant. Chilean officials and volunteers rescued 17 birds that had crashed landed and were foaming from the beak and apparently too weak or dizzy to take off again. Another sick condor and two dead ones were found on Monday.

The birds are being trated at a veterinary clinic in the city of Los Andes, some 70km (40 miles) east of the capital, Santiago.

“The hypothesis is that they suffered organophosphate poisoning after they were exposed to insecticides used for agriculture,” said veterinarian Eric Savard, who has been treating them.

The 18 survivors are recovering with an antidote, antibiotics and saline solution, Savard said, and will remain under intensive care for 10 days.

Vergara said two dead foxes and a dead cow were also discovered in the same area. Officials have sent samples to a laboratory for testing. They say the birds could have eaten poisoned meat or drunk water contaminated with insecticides.

When they gain strength, the birds will be taken to Santiago’s Metropolitan zoo for further care and released in the same place where they were found, Pablo Vergara, regional director of Chile’s agriculture and livestock service, told local media.

The Andean condor is one of the largest flying birds in the world. Biologists estimate only a few thousand are left in the wild.

This article originated from Associated Press in Santiago and was published by the Guardian UK.