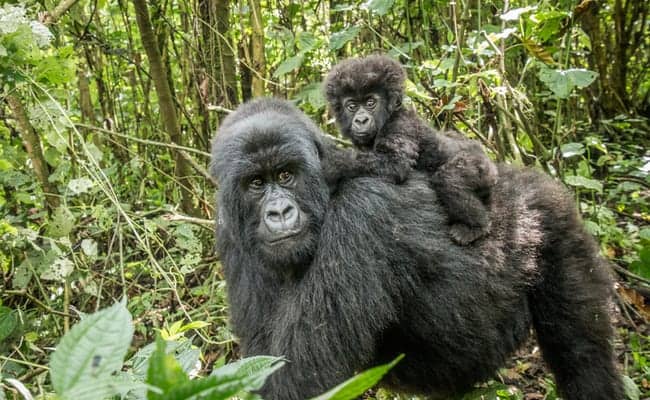 A new study finds that small-scale mineral mining in the eastern Democratic Republic of the Congo (DRC) is a critical factor in illegal poaching of great apes and other wildlife. It’s happening for the saddest, most basic of reasons, too: Those miners are hungry.

In fact, the miners have no other source of meat/protein. Sure, they’d eat beef, chicken or fish, but their circumstances prevent them from obtaining it. Needing a source of meat, they instead hunt and kill the animals they can find. They’re eating bushmeat from gorillas, chimpanzees, elephants and other animals.

The study by the Wildlife Conservation Society (WCS) surveyed small-scale miners over the course of three months. An artisanal or small-scale miner is essentially a subsistence miner. These men, women, and even children are not mining company employees. Rather, they work independently at mines, digging or panning for minerals with little to no equipment. They are among the 13 to 25 million people worldwide who scratch out a living in this way.

In Africa, people become small-scale miners for a variety of reasons. For many, income from agriculture is dwindling. Poverty, regional conflicts, economic crisis or natural disasters push people toward seeing income from this difficult work. These people typically work at mines often controlled by armed groups.

In the DRC, miners are digging for gold, cassiterite (used to make tin), wolframite (used to make tungsten), and coltan (used in technology to manufacture items like cell phones). Yes, that means your mobile phone almost certainly was made using materials that came from miners sustained by bushmeat.

Between 8 and 10 million residents of DRC make their livelihoods from artisanal and small-scale mining. That’s 14-16 percent of the country’s population as of 2008. If all those people have to hunt to eat, it’s no wonder at-risk animal species populations are plummeting.

Indeed, the miners themselves realize the damage they’re doing. According to the study’s findings:

Almost all respondents stated openly that they consumed bushmeat regularly because of the lack of alternatives and believed that bushmeat hunting had caused declines and local extinctions of some large mammal populations, including great apes. Respondents stated they would reduce their consumption of bushmeat if domestic meats became more available.

“We’ve found most people don’t actually want to mine,” Andrew Plumptre, director of WCS’s Albertine Rift Program, told Wired magazine in 2016. “They tend to be young men who are trying to raise money for school fees or if there’s an emergency and they need medical support for their families.”

This problem has passed the point of crisis. For example, in the eastern DRC the number of Grauer’s gorillas, a critically endangered ape, declined by 77 percent over the past 20 years due to hunting – and miners have been doing much of that hunting.

In raw numbers, that means while in1994 wehad about 16,900 Grauer’s gorillas, there are only about 3,800 left today. The single greatest cause of this population decimation is poaching by small-scale miners, says the International Union for the Conservation of Nature (IUCN). What’s needed, says Richard Tshombe, Director for WCS’s Democratic Republic of Congo Program, is some alternative opportunities that would enable the subsistence miners to choose a different path.

“Developing sustainable business opportunities that can compete with the economic benefits of mining could support miners to pursue other avenues of employment and at the same time help ease the burden of mining in DRC’s most biodiverse landscapes,” Tshombe said in a WCS news release.

Miners need an alternative (and would take it, says the study) if it got them out of doing this type of work and subsisting on bushmeat. The DRC also needs to better regulate its mining sector located in forests outside of protected areas. To have any hope of reversing the incredible damage that uncontrolled mining is doing to the local ecosystems and animal populations, the armed groups that defend illegal mining operations also need to be stopped.

As long as armed gangs exert power and continue bringing guns to the forests, nothing will get better for the people or the animals in the Congo.