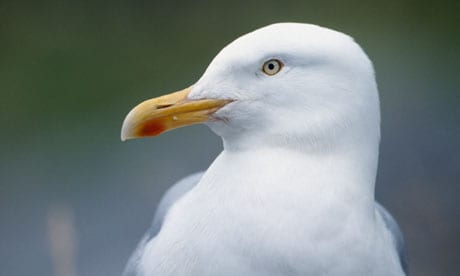 Owen Paterson, the environment secretary, has given the green light to a controversial cull of endangered sea birds on the Ribble Estuary in Lancashire, the Guardian has learned. The RSPB said it is “extremely concerned” that the cull of up to 475 breeding pairs of herring gulls and 552 breeding pairs of lesser black-backed gulls at BAE System’s Warton aerodrome could now set a precedent for similar culls elsewhere.

The Department for Environment, Food and Rural Affairs (Defra) ruled that the cull could go ahead because it would not reduce the area’s number of breeding seabirds by more than 25% of its designated total of 20,000 birds. The RSPB said that while its recognised BAE Systems’ concerns that the gulls present a risk to aircraft using the airfield, it fears that the 25% reduction threshold cited by Defra could now be used to justify further culls.

BAE Systems’ application to cull the birds was originally rejected in 2010 by Natural England, the government agency responsible for protecting the bird species, on the grounds that it was not compatible with the conservation objectives stipulated by the Wildlife and Countryside Act 1981. The Warton aerodrome lies inside a SSSI (site of special scientific interest) as well as being part of the Ribble and Alt Estuaries special protection area (SPA), meaning that its endangered bird species are afforded further conservation status and protection by the EU.

However, BAE Systems successfully appealed against Natural England’s original decision, citing in part – according to documents seen by the Guardian – that Natural England had earlier given consent to a cull of lesser black backed gulls on a shooting estate on the Bowland Fells , a nearby SPA in Lancashire. Chris Packham, the BBC Springwatch presenter and naturalist, described the Bowland cull as a “travesty” when it was first reported in the Guardian last month .

BAE Systems also successfully persuaded Defra that the site’s “species diversity” was not a relevant factor when assessing its total number of breeding seabird.

Defra granted the consent to cull on 29 May and BAE Systems now has a year to complete the extermination of the birds. Appeal documents show that shooting the birds within two daily alternating “cull zones” is the preferred method. Marksmen positioned in camouflaged hides will use rifles muffled with silencers.

A Defra spokeswoman said: “After careful consideration, we have taken the decision to allow a limited number of gulls to be controlled that are impacting on air safety.”

A Natural England spokeswoman said: “Natural England has been directed [by Defra] to consent control of a limited number of gulls on the Ribble Estuary that are impacting on air safety. We expect to issue the consent within the coming weeks. We continue to consider ways to minimise the impact on the estuary’s important colony of seabirds, taking into consideration the safety of aircraft using BAE Warton.”

A spokeswoman for BAE Systems said the company legally carried out a smaller cull of 200 breeding pairs of lesser black backed gulls in 2011 and has also been deploying “bird scaring” techniques at the airfield. However, it said that the population of birds had “grown substantially”.

She added: “The population of herring gulls at the Ribble Estuary presents a risk of birdstrike to aircraft operating from Warton airfield. BAE Systems has sought to reduce this risk. Following a public inquiry, and a decision by the secretary of state, we were given consent to cull up to 475 pairs of herring gulls on Banks Marsh.”

The RSPB said that it acknowledged that BAE Systems had first explored using non-lethal methods and that a cull is now necessary to the “reduce the risk [of bird strike] to a safe level”. However, it said it was “extremely concerned” with the way the Defra had arrived at its decision and its “implications for the UK’s wildlife”.

Martin Harper, the RSPB’s conservation director said: “Although we recognise the air safety risk, we believe the secretary of state’s conclusion is based on a fundamental misunderstanding of wildlife protection designed to conserve the UK’s best wildlife places. We strongly disagree with his interpretation that it is acceptable to lose up to a quarter of a protected site’s breeding bird population without it damaging the conservation value of that site. This sets a very worrying precedent for this and similar sites across the UK.”

This article was written by Leo Hickman for the Guardian.co.uk