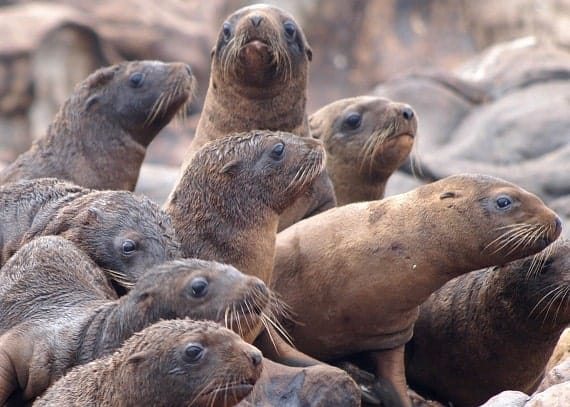 Pacific sleeper sharks, a large, slow-moving species thought of as primarily a scavenger or predator of fish, may be preying on something a bit larger – protected Steller sea lions in the Gulf of Alaska.

A new study found the first indirect evidence that this cold-blooded shark that can grow to a length of more than 20 feet – longer than a great white shark – may be an opportunistic predator of juvenile Steller sea lions.

Results of the study have just been published in the journal Fishery Bulletin. The findings are important, scientists say, because of management implications for the protected Steller sea lions.

For the past decade, Markus Horning of the Marine Mammal Institute at Oregon State University has led a project to deploy specially designed “life history transmitters” into the abdomens of juvenile Steller sea lions. These buoyant archival tags record data on temperature, light and other properties during the sea lions’ lives and after the animals die the tags float to the surface or fall out ashore and transmit data to researchers via satellite.

From 2005-11, Horning and his colleagues implanted tags into 36 juvenile Steller sea lions and over a period of several years, 17 of the sea lions died. Fifteen transmitters sent data indicating the sea lions had been killed by predation.

“The tags sense light and air to which they are suddenly exposed, and record rapid temperature change,” said Horning, who is in OSU’s Department of Fisheries and Wildlife. “That is an indication that the tag has been ripped out of the body, though we don’t know what the predator is that did this.

“At least three of the deaths were different,” he added. “They recorded abrupt temperature drops, but the tags were still dark and still surrounded by tissue. We surmise that the sea lions were consumed by a cold-blooded predator because the recorded temperatures aligned with the deep waters of the Gulf of Alaska and not the surface waters.

“We know the predator was not a killer whale, for example, because the temperatures would be much higher since they are warm-blooded animals.” Data collected from the transmitters recorded temperatures of 5-8 degrees Celsius.

That leaves a few other suspects, Horning said. However, two known predators of sea lions — great white sharks and salmon sharks — have counter-current heat exchanges in their bodies that make them partially warm-blooded and the tags would have reflected higher temperatures.

The Oregon State pinniped specialist acknowledges that the evidence for sleeper sharks is indirect and not definitive, thus he is planning to study them more closely beginning in 2015. The number of sleeper sharks killed in Alaska as bycatch ranges from 3,000 to 15,000 annually, indicating there are large numbers of the shark out there. The sleeper sharks caught up in the nets are usually comparatively small; larger sharks are big enough to tear the fishing gear and are rarely landed.

“If sleeper sharks are involved in predation, it creates something of a dilemma,” said Horning, who works out of OSU’s Hatfield Marine Science Center in Newport, Ore. “In recent years, groundfish harvests in the Gulf of Alaska have been limited in some regions to reduce the potential competition for fish that would be preferred food for Steller sea lions.

“By limiting fishing, however, you may be reducing the bycatch that helps keep a possible limit on a potential predator of the sea lions,” he added. “The implication could be profound, and the net effect of such management actions could be the opposite of what was intended.”

Other studies have found remains of Steller sea lions and other marine mammals in the stomachs of sleeper sharks, but those could have been the result of scavenging instead of predation, Horning pointed out.

The western distinct population of Steller sea lions has declined to about 20 percent of the levels they were at prior to 1975.

The above story is based on materials provided by Oregon State University. Note: Materials may be edited for content and length.

This article was first published by ScienceDaily.com on 15 Oct 2014.