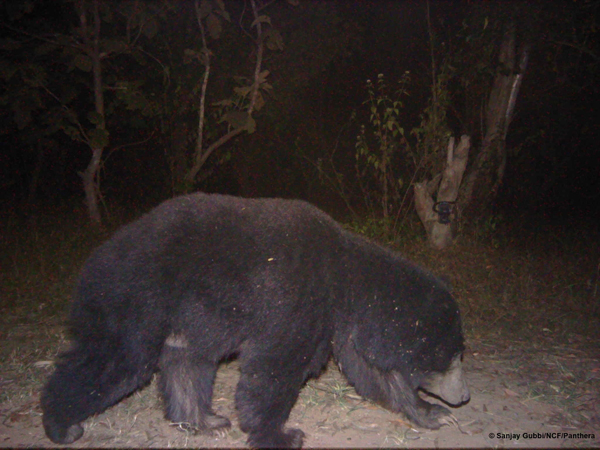 “Selfies” are all the rage this year, and even bears have jumped on the trend.

Especially the shaggy-coated, termite-loving sloth bears (Melursus ursinus), who seem particularly fascinated by the cameras that scientists have put up in forests to secretly capture their stealthy moves.

On November 26 at 7:30 PM, one curious sloth bear decided to take a closer look at such a camera that researcher Sanjay Gubbi and his team from the Nature Conservation Foundation installed in a eucalyptus plantation in the southern Indian state of Karnataka. The bear jostled with the camera for a while, and tore open the belt that held it to a tree stump before flinging it to the ground. However, another camera installed on an opposite tree sneakily clicked away, capturing the inquisitive bear.

Later that night, the same camera also recorded a gaur (Bos gaurus), a wild pig (Sus scrofa) with its many piglets, and the ever-elusive leopard (Panthera pardus), all seemingly unperturbed by the preceding event.

In a separate incident, about five miles away, another sloth bear took a fancy to another camera. Only this time, it decided to get a little creative and flipped the camera over. Over the next 30 hours, the camera took nearly two thousand photographs – capturing not wildlife but hundreds of tiny leaves, the rustling of which continually triggered its motion sensor.

The bears perhaps need more than just a peep to satisfy their curiosity.

Special note: The author works with researcher Sanjay Gubbi and his team.
This article was written by Shreya Dasgupta for Mongabay.com