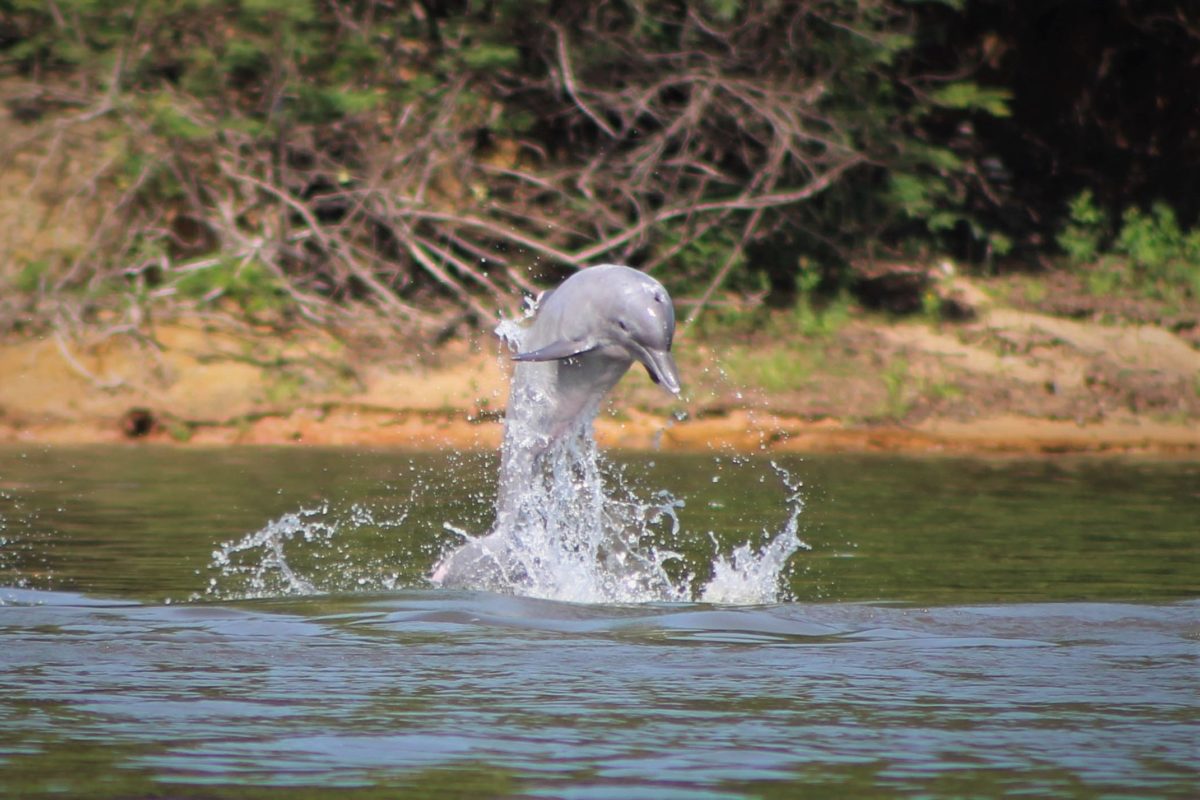 For decades it was the only freshwater dolphin species in the world not considered threatened by human activity. The tucuxi of the Amazon held out even as similar species in South America and Asia were dammed in, poisoned, or killed as bycatch; one is considered to have gone extinct.

Now, the tucuxi (Sotalia fluviatilis) has finally succumbed: in the latest assessment for the IUCN Red List of Threatened Species, this river dolphin has been declared endangered, with threats arising from entanglement in fishing nets to damming of rivers. Those are the same factors that threaten the pink river dolphin (Inia geoffrensis), with which the tucuxi shares a habitat and which was itself declared endangered in 2018.

The pink river dolphin, famous for its color and a central figure in Amazonian folklore, is more docile and an easier subject for scientists to study. Researchers are now seeking to find out more about each of the two Amazonian dolphin species and understand their peculiarities.

A study published in 2019 estimated an abundance of both species in the Tefé River and Lake Tefé, which lie in the interior of Brazil’s Amazonas state. It found that the tucuxi occurs in greater numbers in easily navigable habitats, while the pink river dolphin, with its more flexible body, is able to explore narrower, shallower streams without getting stuck.

Despite the differences, both species face the same threats, and their declining populations were discussed in a 2018 study carried out along 30 kilometers (19 miles) of waterways inside the Mamirauá Sustainable Development Reserve in Amazonas state. The study drew on 22 years of research to conclude that the pink river dolphin population was dropping by half every 10 years; for the tucuxi, it was more rapid: every nine years. Even though the data covered only a tiny stretch of the 25,000 km (15,500 mi) of navigable rivers in the Amazon Basin, a notable factor is that Mamirauá is a protected area under less environmental pressure than much of the rest of the Amazon. The study’s assumption is that, as fast as dolphin populations are dropping within the reserve, on the outside the decline is likely more dramatic.

Among the more common threats to the Amazonian dolphins are hydroelectric plants, bycatch, hunting by and competition with fishers, and mercury poisoning.

The Brazilian government’s 10-year electricity plan calls for the construction of another three large dams in the Amazon by 2029; the 2050 National Power Plan calls for even more. But the Santo Antônio and Jirau dams, operating on the Madeira River since 2012 and 2013 respectively, serve as an example of what could happen if new dams are built in the Amazon: their construction divided the dolphins’ habitat, trapping 50 to 100 individuals between the two dams, leaving them to fall sick or die because of genetic impoverishment.

Bycatch is also a problem for the dolphins, which get snagged in fishing nets when going after trapped fish and subsequently drown. Initial tests are underway in Tefé to tackle the problem using echosounders, a sort of acoustic repellent.

“We will test different frequencies here and in Peru to keep the dolphins out of the nets but not scaring them enough to leave the region,” says Miriam Marmontel, a researcher at the Mamirauá Institute.

Another threat is local fishers’ harvesting of dolphins for their fat, to use as bait for a type of catfish, piracatinga (Calophysus macropterus), that’s widely eaten in the Amazon. A moratorium on piracatinga fishing, which has been extended until June this year, offers a little breathing room for the dolphins. But there are still some fishers who see the dolphins as competition for fish and kill them intentionally.

“I saw them cut off a dolphin’s dorsal fin and leave him flailing about because he had torn their net,” says Marcelo Oliveira, a conservation expert at WWF Brazil.

Oliveira says finding solutions to help fishers and river dolphins coexist is crucial, but adds this won’t happen with new dams being built or gold mining going on.

“There is a huge disconnect between the development model at hand in the Amazon and the needs of native Amazonian species,” he says.

He says the dams not only threaten the dolphins but impact the food security of the people living in the forest as well: “Impeding the flow of rivers is also a threat to fish species that will no longer reach the tables of those who need them to eat.”

Artisanal gold mining presents another danger, through the discharge of mercury into rivers. The mercury enters the food chain through smaller fish, eventually working its way up into the dolphins, where it accumulates and can cause a variety of health problems.

“We found high levels of mercury in the dolphins,” Marmontel says, pointing to a study showing that dolphins can be indicators of the presence of heavy metals in natural aquatic environments. Further studies are expected to evaluate the effects of mercury on the health of cetaceans. “We need to collect samples to check for alterations on the cellular and sub-cellular levels,” Marmontel says.

Given the range of threats hanging over them today, the Amazonian dolphins could go the way of freshwater dolphins on the other side of the planet, researchers warn.

“Dolphins in Asia have been under greater threat than here and have suffered many of the same problems as ours,” says Mariana Paschoalini Frias, a researcher at the Aqualie Institute. “If we look at what’s already happened in Asia, we get an idea of the size of the problem we may face shortly here in South America.”

A dam-building spree in Asia has led to the fragmentation and degradation of dolphin populations there. This has driven the decline of the South Asian river dolphin (Platanista gangetica) in India and Bangladesh, and of the baiji (Lipotes vexillifer) in China. The baiji was considered extinct after construction of the Three Gorges Dam and other dams on the Yangtze River. A subspecies of the South Asian river dolphin, P. gangetica minor, is also facing challenges after its population was fragmented by 17 dams.

“Here in Brazil, we are beginning to see this process underway with the Araguaian dolphin,” Frias says. The species, Inia araguaiaensis, which was only described in 2014, is “currently stuck between four dams, and many plans are afoot for the Tocantins-Araguaia region that could subdivide the population into 12 groups,” Frias says.

The Tucuruí dam was one of the first to fragment the species’ population on the Tocantins River. Experts say it will take years of study to really understand the effects of fragmentation on the Araguaian dolphin, including on exchange of genetic information and distribution of prey. “If we don’t take more effective measures beyond simply doing research, like creating conservation policy, we could lose the species soon,” Frias says.

But even research into the Amazon’s river dolphins remains underfunded.

“We still don’t know all the regions where the dolphins exist. They could be disappearing from places which we didn’t even know were their habitats,” Oliveira says.

Being placed on the IUCN Red List is important in bringing visibility to the tucuxi’s plight, as it could leverage resources for more research. “So now the animal is on the endangered list, and where is the data?” Frias says. “I’ve told my team: ‘Let’s invest in studies on the Sotalia because no one else is doing it.’”

The River Dolphins Dashboard was launched in October 2020 by experts at the South American River Dolphin Initiative (SARDI). It brings together work being done by researchers in Brazil, Peru, Colombia, Bolivia and Ecuador, and provides georeferenced data collected over the last 20 years on the various freshwater dolphin species and their habitats.

“We now have an initiative that updates the dolphin distribution map for all of South America,” says WWF’s Oliveira, who is also coordinator of SARDI. “It is a living platform maintained by many collaborators.”

Data for the platform was collected during 42 expeditions funded by WWF Brazil along 47,000 km (29,000 mi) of waterways.

“Some expeditions lasted 25 days, navigating with specialists counting dolphins from six in the morning until six in the evening,” Oliveira says. “It costs a lot” — between $12,500 and $17,900, he estimates — “and you need 12 people on the boat: one team at the bow and one at the stern to double check.”

As data is uploaded to the platform, it should help shed a light on population trends for the various Amazon dolphin species. The researchers have also been using drones to help count the animals since 2015. Aside from helping with the expeditions, drones have been tested to collect information in areas that are inaccessible by large boats.

“In regions with narrower waterways, we believe conservation unit managers or even community leaders could launch a drone and estimate dolphin population,” says Frias, who is also a curator of the River Dolphins Dashboard and participated in a study published by Cambridge University.

To better understand how the animals circulate throughout the region, expeditions have been carried out since 2017 to install satellite tags on the dolphins’ dorsal fins, allowing researchers to keep track on their location in real time. Thirty of the dolphins tagged to date have preferred more preserved habitats, especially within conservation units.

The River Dolphins Dashboard has become a tool for driving the development of public environmental policy. Oliveira says they’re in talks with ICMBio, the administrative arm of Brazil’s environment ministry, “to see how the platform can help monitor the advances of the national action plan for conservation of aquatic mammals in the Amazon.”

Because it covers a large region of occurrence for the animals, the platform also plans to collaborate with the conservation management plan for river dolphins, which will be validated by the International Whaling Commission’s scientific committee.

“Support from an international commission,” Frias says, “helps apply a little more pressure to make sure the national action plans for conservation of endangered species from each country are actually carried out.”

This article by Sibélia Zanon was first published on Mongabay.com on 21 April 2021. Lead Image: A tucuxi dolphin by Jéssica Melo.