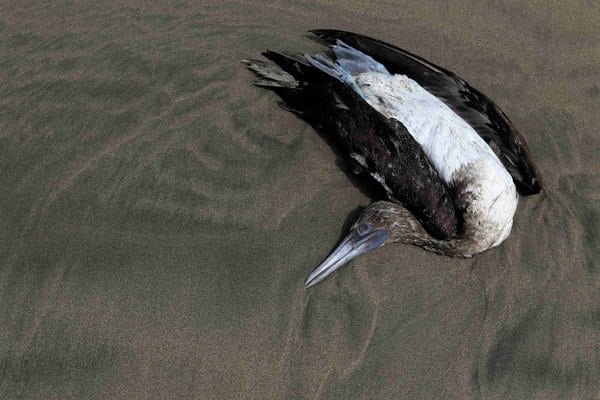 Late last year, fishermen began finding dead dolphins, hundreds of them, washed up on Peru’s northern coast. Now, seabirds have begun dying, too, and the government has yet to conclusively pinpoint a cause.

Officials insist that the two die-offs are unrelated. The dolphins are succumbing to a virus, they suggest, and the seabirds are dying of starvation because anchovies are in short supply.

But even three months after officials began testing the dolphins, the government has not released definitive results, and there is growing suspicion among the public and scientists that there might be more to the story. Some argue that offshore oil exploration could be disturbing wildlife, for example, and others fear that biotoxins or pesticides might be working their way up the food chain.

At least 877 dolphins and more than 1,500 birds, most of them brown pelicans and boobies, have died since the government began tracking the deaths in February, the Environment Ministry said last week. The dolphins, many of which appeared to have decomposed in the ocean before washing ashore, were found in the Piura and Lambayeque regions, not far from the border with Ecuador.

The seabirds, which seem mostly to have died onshore, have been found from Lambayeque to Lima. “Never in my 40 years as a fisherman have I seen anything like this,” said Francisco Ñiquen Rentería, the president of the Association of Artisanal Fishermen in Puerto Eten, in the Lambayeque region. “Sometimes in the past, you’d randomly see a dead dolphin or a pelican, but this, what’s happening now, is really alarming.”

“It is odd indeed,” Gabriel Quijandría, the deputy environment minister, acknowledged in an e-mail. “But they are not related.”

The federal Ocean Institute has said that the most likely culprit in the dolphin deaths is the morbillivirus, from a family of viruses linked to previous mass deaths of marine mammals, Mr. Quijandría said, though officials in recent days have sounded less certain.

For the seabirds, he wrote, the “most plausible hypothesis so far” from the National Agricultural Health Service is that they are dying from a lack of food, mainly anchoveta (Engraulis ringens), a Peruvian anchovy, as a result of the sudden heating of coastal waters.

The Environment Ministry said the dolphin deaths had no link to fisheries, red tides or other biotoxins, bacteria, heavy metals or pesticides. It said it had also ruled out any connection to offshore seismic testing by companies to locate oil and gas deposits under the seabed.

Still, fishermen, environmentalists and others suspect that government officials are not being completely candid.

The discovery of dead animals on beaches near Lima, the capital, in recent days has complicated matters. Over the weekend, the Health Ministry issued an alert advising people to avoid the waters around Lima and to the north, “until we know the cause of the recent deaths of marine species.”

It advised people not to eat raw seafood, an ingredient of the national favorite ceviche, and recommended that people disposing of dead marine animals wear gloves and masks. The warning sowed confusion, given earlier government statements indicating that the seabirds were probably starving rather than falling ill from some disease.

The Peruvian coast, nourished by the cold Humboldt Current, is one of the richest marine habitats on earth. Flowing north from Antarctic waters, the current lifts nutrients from the ocean depths into zones nearer the surface.

So plentiful are the plankton in these waters that the area has the world’s largest fishery, focused on the anchoveta. The fish is an important component of the diets of the dolphins, seabirds and other predators.

The Environment Ministry says that data from the South American institute for the study of the effect of El Niño show that coastal water temperatures have been above average in recent months. The anchoveta prefer the colder water, and if they descend below a depth of six or seven feet the pelicans cannot reach them.

This article written by David Jolly from Paris, and Andrea Zarate from Lima, Peru was published by the New York Times.