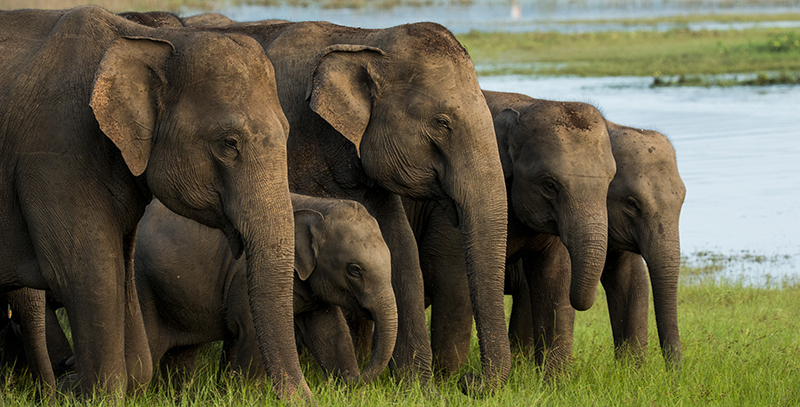 KURUNEGALA, Sri Lanka — Residents of the farming village of Irudeniyagama in Sri Lanka’s North Western province were taken by surprise last week when they saw a wild elephant calf trying to enter a house. They gave chase, but instead of returning to the nearby forest, the calf next tried to find shelter inside another house.

A closer look showed that the calf’s mouth was split open and all its teeth shattered. It had an infected wound with pus oozing from it.

The injury was caused by an improvised explosive device hidden in fodder bait used by villagers to hunt animals. Known locally as hakka patas, or “jaw exploder,” these devices are a combination of gunpowder and fragments of metal or rock packed tightly together. When bitten into or crushed inside an animal’s mouth, they explode, shattering the jaw and destroying the tongue and other soft tissue. The resulting infection can spread down through the esophagus, often leading to extremely painful deaths.

Leading cause of death

It’s meant to be a method of killing wild boars, a popular yet illegal bushmeat, and other game animals, but has contributed significantly to Sri Lanka’s increasing elephant deaths.

“Unable to eat or drink, the victimized elephants gradually become weak and unable to follow the herd. They are soon left behind. If there is a water hole nearby, they take refuge in them or, in cases like Irudeniyagama, elephants would come closer to human settlements,” said Isuru Hewakottage, a veterinary surgeon overseeing operations for the Department of Wildlife Conservation (DWC) in North Western province.

Of the 319 total elephant deaths recorded in 2018, 64 were caused by these explosive devices, or 20 percent, according to U. L. Taufeek, head of the DWC’s elephant conservation unit. That’s higher than the 53 elephants killed last year from gunshot injuries, previously the leading cause of elephant deaths in Sri Lanka. So far this year, 30 elephant deaths have been attributed to these explosives. The island is home to fewer than 6,000 Sri Lankan elephants (Elephas maximus maximus), a subspecies of the Asian elephant.

“Often, it is the young elephants below 10 years of age that get killed. The majority of the victims are elephant calves under 5 years of age,” Hewakottage told Mongabay.

“The young calves are both curious and playful. They also pick things and insert into their mouths, unlike the more wary adult elephants. Perhaps the younger beasts are able to see objects much closer as they have not yet grown to their full height. But adult elephants could be more discerning and able to detect the smell of gunpowder,” Hewakottage added.

Tharaka Prasad, the DWC’s veterinary chief, said it was “nearly impossible” to treat the severe damage done by these devices.

“In most cases, it is only possible to reduce the pain associated with their inevitable death,” he said. “Only a handful survive these explosive devices.”

Use of these improvised explosive devices targeting game animals was first reported in 2008 from the island’s east, but has since rapidly spread to other parts of Sri Lanka.

“When an animal is killed using a firearm or by poisoning, poachers leave some trace that can aid detection. But in the case of these explosive devices, it is extremely difficult to trace the source,” he said, adding that any telltale signs can be concealed or disposed of.

Prithviraj Fernando, an elephant researcher and head of the Center for Conservation Research-Sri Lanka (CCRSL), told Mongabay that the problem needed to be addressed from both conservation and anti-poaching angles. “The best solution is to increase peer pressure to discourage poaching employing this barbaric method,” he said.

Many of the places where these explosive devices are used to hunt animals are also sites where human-elephant conflicts occur, with the hotspots being the island’s rice-growing heartland in the north-central and eastern regions.

Yet, despite instances of elephants destroying their crops, villagers have tended to demonstrate compassion and assist in elephant rescues and in treating the injured. Elephants enjoy a religious and cultural significance in Sri Lanka, but not everyone views the animals that way.

The DWC’s Sooriyabandara said sometimes the explosive bait is laid out specifically to target elephants seen as a nuisance to villagers. “It’s not all accidental. When a villager is killed or crops are damaged by elephants, outraged villagers often use these devices,” he said.

To mitigate the impact of the explosives on the island’s elephant population, conservation researcher Fernando said the villagers needed to be made aware of how much suffering they cause the elephants before they die. “Awareness is key. We need to encourage villagers to desist from using explosive devices,” he said.

Wildlife authorities are already working with conservation-focused organizations to spread the word and win public support, said Sooriyabandara. One such group is the Colombo-based Centre for Environmental Justice (CEJ), which hosts a series of dialogues to create awareness in human-elephant conflict hotspots.

Using videos and photographs, CEJ members highlight the agony of elephants maimed by the explosive devices, as well as the need to minimize conflict through better wildlife conservation methods.

“We work more with children and community leaders who can play a critical role in creating awareness,” said CEJ executive director Hemantha Withanage.

He added that the problem was no longer just a grassroots one.

“There is a danger of illegal manufacturing of these explosives at a commercial scale, and this may result in more elephant deaths in the future,” Withanage said, adding that there was a consistent increase in elephant deaths due to the use of explosives.

The root of the problem is the bushmeat trade, elephant biologist Manori Gunawardena told Mongabay.

”To prevent increasing elephant deaths due to the use of improvised explosive devices, it is necessary to curb and control the illegal bushmeat trade,” she said. “People should be made aware of the consequences to the wild.”

This article by Malaka Rodrigo was first published on Mongabay.com on 20 June 2019.

So terrible, how can people do such a things?

Absolute shocking and terrible, the Government must make an effort to stop this from becoming a permanent tragedy and must hold the culprits responsible for their actions.

Maybe when their own children start to die from these devices, the impact will set in.

Why are humans so good at causing harm to others?!?!?!?

Humans are the ones that create hell on earth for themselves, and unfortunately, the animals. It is such a disgrace. Poor souls :'( <3