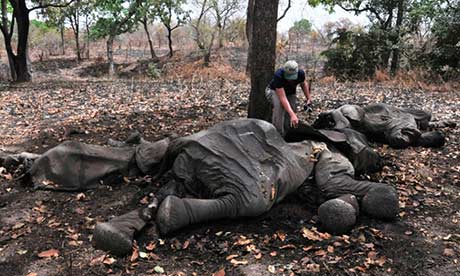 The massacre of elephants has gone beyond being a problem for animal rights activists. It now concerns international institutions and governments at the highest level because it is perceived as a threat to political and economic stability in central Africa.

Last month, the matter drew the attention of the African Development Bank in Marrakech, at an annual assembly that was also attended by African finance ministers. The bank’s president, the Rwandan economist Donald Kaberuka, presented a global action plan addressing the problem along with the World Wildlife Fund.

“This is not just an environmental problem,” according to the bank’s Marrakech Declaration. “The violence and damage now threaten peace and the rule of law, as well as the revenue many African countries earn from tourism and other wildlife uses; some of the poorest and most vulnerable communities suffer … wildlife trafficking thwarts governments’ efforts to stop other illicit trades, such as arms and drugs. It fuels organised crime and corruption, and compromises regional security.”

Kaberuka asked the finance ministers at the meeting to strengthen customs controls as a first step, saying these were key to dismantling smuggling networks.

The matter has also reached the UN. Last month, the UN secretary general presented a report to the security council on concerns about the links between poaching and the “criminal or even terrorist networks threatening the stability of central Africa”. Themost vulnerable countries were said to be Cameroon, which has deployed army patrols in its northern national parks, the Central African Republic, Chad and Gabon.

The report said that “the illegal ivory trade may currently constitute a major source of funding for armed groups”, quoting the example of the Lord’s Resistance Army. It also expressed concerns that poachers are using ever more sophisticated and powerful weapons, some of which, it is believed, may be originating from the political fallout in Libya.

The plan proposed by the African Development Bank in Marrakech recommends strengthening the resources of anti-poaching patrols, monitoring the strict application of the laws and increasing the penalties imposed on the traffickers.

These ideas are not new. Both the diagnosis and the cure have been known for many years. An action plan for African elephants was adopted in 2010 with $600,000 from China, France, Germany, the Netherlands and South Africa. “Now we need a commitment at the highest level, since that alone will enable us to contain this crisis,” said Jim Leape, director general of WWF’s international secretariat.

Some 30,000 elephants were killed in 2011, nearly 8% of the total elephant population in Africa, and the number has been rising steadily since 2006. The present levels are the highest since the 1989 moratorium on the ivory trade.

Gabon alone has lost 60% of its elephant population in the past decade and has already taken action. In Marrakech, Gabon’s president, Ali Bongo Ondimba, proposed setting up an emergency task force that could intervene as soon as any large-scale poaching occurred in one of the countries. In mid-May Gabonese forces were sent to the Central African Republic to help defend the Dzanga-Sangha national park after an attack on elephants there.

“It is important to intervene before the situation gets out of control. Otherwise we know that there is a great risk of entering a spiral that ultimately leads to the creation of a new conflict zone,” said Lee White, the executive secretary of Gabon’s National Parks Agency.

Gabon has also suggested greater co-operation in training between the various national animal protection agencies, and providing “ecoguards” in the weakest countries.

The Gabonese president urged the establishment of a support fund for the widows and orphans of those guards. “Trafficking has become more and more violent and traffickers no longer hesitate before shooting any rangers who cross them,” said White, who estimates the total cost of these actions at $15m a year.

Ondimba, who is working to get more international co-operation in the fight against wildlife trafficking, announced the action plan in an effort to spur progress on the matter at the next UN annual national assembly in September. But as the WWF’s Leape put it: “Ivory trafficking is a two-headed monster. Targeting the poachers won’t be enough if, at the same time, we don’t deal with the countries providing an opening for this trade.”

This article was written by Laurence Caramel for Guardian Weekly.