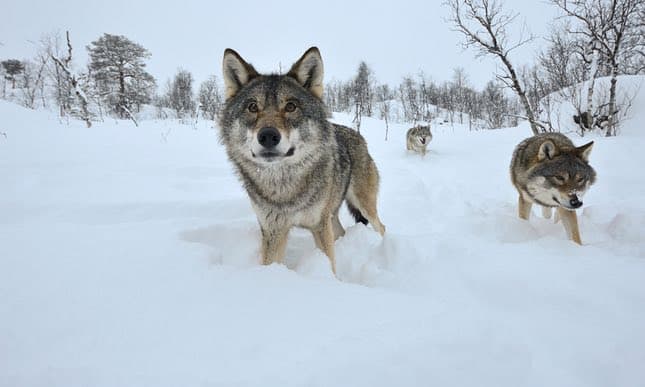 A wolf pack is roaming wild in Denmark for the first time in more than 200 years after a young female wolf journeyed 500km from Germany.

Male wolves have been seen in Denmark since 2012 and the new female could produce cubs this spring in farmland in west Jutland after two wolves were filmed together last autumn.

It is further evidence that the wolf is returning to well-peopled landscapes after centuries of persecution, with wolf packs also re-establishing themselves in France and Germany and individuals sighted in Holland and even Luxembourg. Before the new population, Denmark’s last wolf was killed in 1813.

“We expect that they will have cubs this year or the next,” said Peter Sunde, a senior researcher at Aarhus University.

“People were very surprised when wolves first appeared in Denmark but they are highly mobile and are just as adaptable to cultural landscapes as foxes are. The only problem historically is that we killed them.”

DNA from two faeces samples have confirmed that the female wolf came from a pack 25km south of Berlin in Germany before travelling to north-west Denmark, probably leaving her family group last spring to do so.

There is sometimes speculation that wolves are deliberately released into the countryside by unofficial rewilders but according to Guillaume Chapron, a researcher at the Swedish University of Agricultural Sciences, this female’s trek north was entirely natural. “The wolf went on its four legs, it makes complete biological sense,” he said. Wolves can walk 50km in 24 hours and have been recorded making journeys of more than 1,000km across Europe from Germany, where they re-established themselves in 1998. Germany’s wolf population is currently growing at 25-30% each year, with the young dispersing across central Europe.

Researchers have found wolves in some cases living in suburban areas alongside up to 3,050 people per square kilometre – higher than the population density of Cambridge or Newcastle.

“The wolf is a predator to the roe deer – if you can have roe deer, you can have wolves,” said Chapron. “As long as we don’t disturb them, they will be fine in these human-dominated landscapes. In Denmark there’s no reason wolves can’t thrive. But the question has to be asked, are people going to accept the wolves? The wolf will need to eat something. When they realise that Danish sheep don’t taste too bad that may be a little problematic. It will be interesting to see how far we can coexist with big predators.”

Denmark’s wolves have settled in a well-farmed area of heathland and small pine plantations with plentiful prey in the form of burgeoning populations of red and roe deer.

There have been reports of wolves killing several sheep in the area over winter but the Danish government has already established a wolf management plan with compensation for farmers and funding so livestock farmers can erect wolf-proof fencing. The management plan, drawn up in consultation with game hunters as well as farmers and conservationists, allows for wolves that become “habituated” and live too close to humans to be controlled.

“There is a tradition in Denmark of reaching compromises and reaching solutions,” added Sunde, who said he was optimistic that Danes could coexist peacefully with wolves. “Technically, we can relatively easily manage the wolf population but the challenge is the psychology of humans. There are so many feelings and opinions about wolves in Denmark, as everywhere. The wolf debate is very much value-driven rather than related to concrete problems.”

There are more than 12,000 wolves in continental Europe (excluding Russia, Ukraine and Belarus) and the wolf is a protected species under the EU’s habitats directive. According to Chapron, southern European countries have often been better at accepting new wolf populations than northern Europe. Several countries with relatively small wolf populations including Finland and Norway still pursue controversial annual culls of the animals.

Chapron said he would not like to predict how many wolves could live wild in Denmark. “Let the wolf decide and let people decide as well because we are sharing the landscape. It’s very positive news for nature conservation. It shows that attitudes have changed and when we let nature take care of itself, nature comes back.

“Forget Little Red Riding Hood – it’s not a myth that is back, it’s just a natural part of the European fauna.”

This article was first published by The Guardian on 04 May 2017.

What about predator friendly livestock practices like guard animals: llamas and donkeys? Are they in place? I would think that they’d be more effective than fencing. There’s a co-op of predator friendly farmers in Montana who have guard llamas and since they’ve been put in place have not had predation on their sheep since. But: hooray for wolves! The soul of the wilderness returning to old landscapes is always heartening to hear.

“There is sometimes speculation that wolves are deliberately released into the countryside by unofficial rewilders…according to Guillaume Chapron.” Only Govt. Fish & Wildlife agencies have the resources to re-introduce large predator animal species & subsequently make killing them legal under the authority of ‘wildlife management.’

Europe has over 12,000 free range wolves. I find that both remarkable and wonderful. Will sometime in the far distant future, North Americans, (Canada, the US and Mexico), allow these magnificent animals to do the same?

No, will not. And the further into ‘distant’ future, the less of a chance as human activity & development continually expands.

This is brilliant news and nature just being nature. It works beautifully as long as man doesn’t think it needs messing with and starts meddling. That is when it all goes wrong …

“… the challenge is the psychology of humans.” A quote from the article that says it all! Yes, it is wonderful to think that wolves have wanted to come back to Denmark after they were exterminated 200 years ago. Let us hope that their presence does not entail too much suffering. And here I speak not of human suffering, for there is no reason nor indication that wolves make humans suffer. On the contrary, without wolves, we would probably never have successfully penetrated as far north as we did post-ice age, and without wolves, we would probably not have dogs,… Read more »