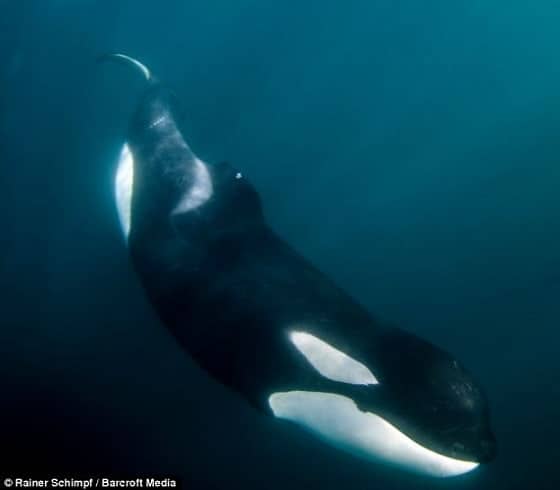 In one of those incredible-but-true stories that makes you want to give the oceans a giant hug, a disabled killer whale missing two of its fins and unable to hunt to feed itself is able to survive through the help of its family. The young male killer whale, or orca, has no dorsal fin or right-side pectoral fin, leaving it unable to hunt and capture prey for itself. Instead of being abandoned or rejected by its pod and left to die, however, the killer whale appears to have been cared for and supported by the members of its pod, which share food with the young whale.

In one of the only times that killer whales have been observed feeding and caring for a non-hunting member, underwater photographer Rainer Schimpf made the heart-warming discovery while tracking the pod hunting in waters off Port Elizabeth in South Africa. Schimpf explained to The Daily Mail that this phenomenon demonstrates that orcas “ have complex, caring social-structures in which they care for their own disabled members.”

Schimpf observed and photographed the pod, consisting of seven members – a female with a bent dorsal fin, four other females, a “huge male,” and the disabled young male – as they hunted and killed a Bryde’s whale measuring 50 feet in length and weighing an enormous 15 tons. Schimpf explained that the young disabled killer whale stayed at a distance while the rest of the pod hunted the Bryde’s whale at the surface and then deep in the ocean depths.

“It was brave and curious enough to come close to the boat and inspect us, but after a while he disappeared as well, presumably to dive down to the whale feast below,” Schimpf explained.

This discovery is only one of a handful where an injured or disabled killer whale has been known to survive with the help of its pod. In 1996, a group of researchers discovered a killer whale calf missing its tail and part of its dorsal fin, which were believed to have been sliced off by a boat propeller.

The injured killer whale, nicknamed “Stumpy,” was not seen for many seasons afterwards and was presumed dead. However, Stumpy was sighted again seven years later, and was last seen feeding with a pod off the coast of Queensland, Australia, in 2008.

A similar heart-warming occurrence happened in January of this year, when a bottlenose dolphin with a spinal malformation was adopted into a group of sperm whales. These inspiring ocean tales should remind us that these intelligent, compassionate animals help each other, but need our help even more. Please consider joining Oceana to fight for the future of these incredible creatures.

This article was written by Justine Sullivan for Oceana.org.