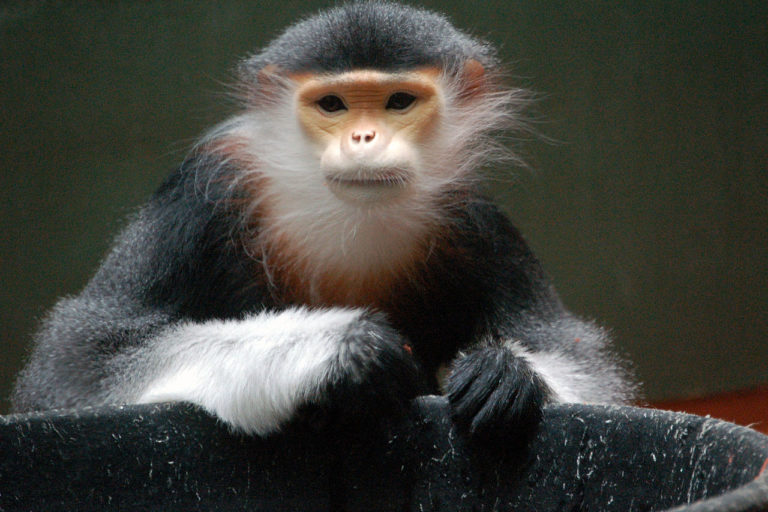 HO CHI MINH CITY, Vietnam — Recently disclosed results from an extensive survey have revealed the presence of several highly endangered species in a forest that is not currently under any legal protection in Vietnam’s central highlands.

Fauna & Flora International (FFI) and GreenViet, a biodiversity conservation NGO based in Da Nang, undertook months of fieldwork involving human observation and 130 remote camera traps in Kon Plong. This rural district is located northwest of Kon Tum, a growing city of 200,000 that is the capital of the province of the same name.

A separate biodiversity summary notes that Kon Plong is likely home to the largest gray-shanked douc langur population in Vietnam, while the Owston’s palm civet population is also significant, as the species has been decimated by snares and hunting in national parks elsewhere in the country.

Perhaps the most remarkable aspect of Kon Plong’s forests, which span 84,000 hectares (207,600 acres), is that they are currently managed for forestry and watershed services, meaning no specific biodiversity protection is in place.

Ha Thang Long, the chairman of GreenViet, started working in Kon Plong in 2001, and has seen firsthand how much the area has changed since then.

“When I first went, there was just one road and it was really bad,” he said in a Skype call. “It took me a whole day to get to the village I stayed in, and now it only takes four hours. Roads have been built everywhere, and hydropower stations have also appeared. A lot of people from elsewhere in the country have also come and tried to start businesses.”

“Kon Plong has gone from being almost entirely forested to being more fragmented, so the change is pretty drastic,” Josh Kempinski, country director of FFI Vietnam, said in a call. “There’s huge potential for sustainable development here. There’s so much you could do in these degraded areas, all kinds of agriculture, and it has a climate suitable for flowers and fruit.”

Both Kempinski and Long are adamant, however, that the remaining forests need to be preserved immediately.

“I don’t want to overblow it, but it’s probably the largest and most important forest that’s not under special forest status, and because it’s not limestone karst like in far northern Vietnam, it’s probably the most threatened. It could relatively easily be completely cleared,” Kempinski said.

“If there is no effort to preserve the wildlife and the forest there, the wildlife will disappear soon,” Long said.

Kempinski cited the area immediately surrounding Kon Tum as an example of what could happen to Kon Plong. The city’s environs appear heavily forested, but the region is largely made up of acacia, rubber and coffee plantations grown on cleared land.

“There’s really nothing to stop Kon Plong from ending up like that, unless there are high-level decisions made around biodiversity protection, ecotourism and ecosystem services,” he said. “That’s the message we’re trying to take to the government.”

Both conservationists also stressed the importance of balancing wildlife protection and livelihood improvement. Kon Plong’s population is mostly made up of ethnic minority groups, and their villages are impoverished.

“It’s a heartbreaking scenario,” Kempinski said. “They’re very poor, and they’re clearing forest to grow an unbelievably low-value crop like cassava, and they grow it in a haphazard way because they’re not supported. They’re destroying the forest they already need to grow a crop that they can barely live on, so we need a holistic view.”

The immediate priority of FFI and GreenViet, meanwhile, is to convince district- and provincial-level government officials to establish a nature reserve in Kon Plong, at the very least.

“Some areas are still difficult to access and in good condition,” Long said. “It should become a reserve or a national park so that there is more effort on conservation and protection. We’re working with the forest protection department and provincial authorities to set that up.”

Kempinski said he is encouraged by his interactions with local officials thus far, particularly at a workshop in which FFI and GreenViet shared their findings and stressed the rarity of Kon Plong’s forests.

“There was almost complete consensus on the need to protect the area,” he said. “What’s left of the forest should be protected, but to do that requires investment, more attention and better development plans, so there’s a huge amount of work to do.”

The images of rare wildlife also helped convince some officials, he said: “One stood up and said, ‘We didn’t know that Kon Plong was so important, that it had endemic primates, bears and more. Now we have to rethink how we can protect the forest.’”

“We’ve never seen snare density like it anywhere in Vietnam,” he said. “Whatever networks hunters and poachers have, they’re already there. We were pulling out massive long lines dozens or even hundreds of meters long, it’s practically like longline fishing.”

Additionally, the NGOs came to realize that without the high biodiversity values, it would be difficult to convince government officials to take action. “You can’t say, ‘This area is really important, but we’re not going to tell you why,’” Kempinski said.

Now, it remains to be seen what sort of action will be taken, but Long cautioned that officials need to act fast. “To me, this is the last chance, the last block of forest in the country that still has wildlife you can’t find anywhere else that isn’t protected,” he said. “It’s just the beginning of major development around Kon Tum, so if we have a good policy right now, it will set the right path for another 20 or 50 years. If not, then there is no chance for these animals.”