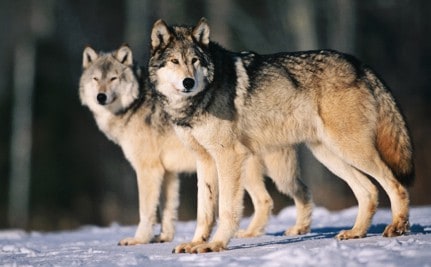 In a shortvideo recently released,the Center for Biological Diversity asks if you would pay $19 to kill a wolf. You probably wouldn’t, but 6,000 people in Montana just did.

Montana has an estimated 625 wolves left. Sadly, new changes to the hunting season, which started in September, could prove to be a disaster for those remaining wolves. It was extended to run for six months during which time hunters will now be allowed to take five wolves each, and they’ll be able to use traps, bait and electronic calls. The extra long season could also put pregnant and nursing females in the crosshairs because they’ll be allowed to continue through the spring. As an added bonus for hunters, out of state hunting fees have been reduced from $350 to $50.

In an attempt to get the other side of the story, the Digital Journal’s Justin King interviewed Montana hunter Jason Maxwell, who runs a pro-wolf hunting Facebook page. According to him, no one wants wolves in the state, and they “should be hunted 24/7 just like the coyote.” He also believes they were never actually endangered because there are thousands in Canada and Alaska and that people who don’t live in wolf states shouldn’t get to have an opinion.

While he sounds almost reasonable in the interview, he spews vitriol in the comments section and elsewhere on the Internet, proving that, at least for some, wolf hunting is about nothing more than hate, arrogance, intolerance and sometimes petty revenge. While he cites numbers from the state, trying to get a straight answer from wildlife officials about where the science is and how they came up with them in the first place is apparently as easy as trying to herd cats.

Last year, Montana Fish, Wildlife and Parks reported that 225 wolves were killed – 128 by hunters, 97 by trappers – during the 2012-2013 season. This was an increase from the previous year, with more than half of the wolves being killed on public lands. Another 104 were killed by the state throughout the year.

Conservationists fear the consequences of such policies if hunting is allowed to continue at this rate under state management. This year, Wyoming wants to reduce numbers by 60 percent, which will leave only abut 100 wolves. Since they lost ESA protection in the Great Lakes and Northern Rockies, more than 1,700 have been brutally killed.

If that were true, predators would have dibs on prey, and if anything still needed to be “managed” then maybe human interference could be justified. In Montana’s case, indiscriminate killing with the sole intent to reduce the number of wolves to appease special interest groups isn’t management; It’s just a bloodbath.

Also, for conservationists, fighting to protect an apex predator and keystone species has beneficial cascading effects on other species, including plants, in the environments they’re present in. For some areas, they’re also a popular tourist draw which helps support local economies.

When it comes to wolf management, the very agencies charged with keeping track of numbers and deciding their fate have a serious conflict of interest due to the facts that hunting licenses generate revenue and there are no consequences for poor management policies or ignoring science unless the wolf population drops below the number required by the federal government, at which point they would lose management authority.

The Feds Still Want Them Off the Endangered Species List

The U.S. Fish and Wildlife Service (FWS) is still defending its proposal to remove Endangered Species Act (ESA) protections for all wolves in the lower 48, with the exception of Mexican gray wolves, despite how terrible state management has proven to be.

As of September, there were 18,000 public comments opposing the delisting. There were also three public hearings scheduled; While one hearing in Washington D.C. took place, the other two in California and New Mexico were canceled thanks to the shutdown. However, organizations are still calling for more public hearings in states where wolves live or may appear so the public can actually have an opportunity to weigh in.

An independent peer review is also required to remove a species from the ESA. However, at the end of the summer the process was put on hold when three scientists were kicked off the peer review because they had added their names to a letter that was sent to the Department of the Interior questioning the science behind the proposal to delist wolves.

According to the Center for Biological Diversity, this is the first time the FWS has put restrictions on scientists who may have an “affiliation with an advocacy position.” In this case the scientists in question didn’t necessarily have a stance as wolf advocates, they just did exactly what they were supposed to do. They looked at the available data and formed an opinion. Their opinions just didn’t match the objectives of the FWS, so they got blacklisted.

The FWS should continue to do its job, which is to ensure wolves are not subjected to out of control hunting policies and intolerance or the special interests of very vocal hunting and ag groups who continue to call for more to die.

Keeping ESA protection for wolves in the lower 48 won’t impact decisions in the northern Rocky Mountains or western Great Lakes, where wolves are present, but it will keep protections for the rest who are venturing into their historic range in other parts of the U.S. where there is suitable habitat in Pacific Northwest, southern Rocky Mountains, Northeast and California. Their continued survival depends on their ability to expand, instead of being confined by arbitrary lines they’ll never understand.