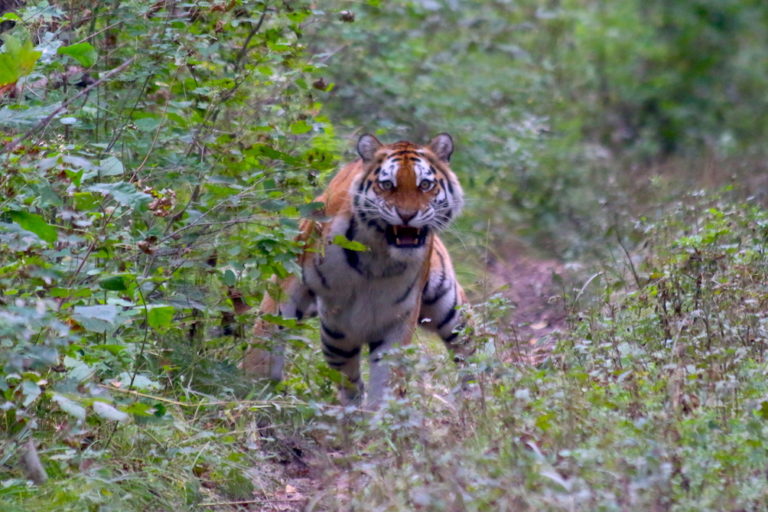 On Sept. 15, Aleksandr Rybin was checking a camera trap in Russia’s Sikhote-Alin Biosphere Reserve when something red and long-tailed darted in the bushes in front of him.

“A thought flashed in my head: cougar?” Rybin, a 45-year-old researcher at the Wildlife Conservation Society (WCS) Russia, said in a statement. “No, what cougar can be here; we’re in the Far East. It’s a tiger! I thought, convulsively grasping at the camera.”

It wasn’t just one tiger, but two. An adult female Amur tiger, or Siberian tiger (Panthera tigris altaica), slinked down a path, while her cub bounded over to a puddle.

Thinking the tiger duo had disappeared into the woods, Rybin and his colleague got into their vehicle to drive away, only to encounter the tigress again on the road.

“She looked at us menacingly and hissed in displeasure,” Rybin said. “Then I took these pictures. Like any mother, the tigress protected her child, and in order not to irritate the beast, we quickly left this place and drove on.”

Rybin has been working for WCS Russia for the past 22 years, using camera traps to monitor Amur tiger and critically endangered Amur leopard (Panthera pardus orientalis) populations. But encounters like this are very rare, he said.

“I have had not more than 10 encounters like this,” Rybin told Mongabay in an email. “I especially remember tiger cubs I met in the wild — it was really exciting. Amur leopards are even more elusive than tigers — I have seen them only three times in the wild.”

“I was very glad and excited to meet such a magnificent animal, especially with offspring,” he added.

Amur tigers are classified as an endangered species by the IUCN, the global authority on the conservation status of plant and animal species. However, no one currently knows how many are in the wild, says Dale Miquelle, an Amur tiger expert and director of WCS Russia.

“The last survey in Russia, done in 2015, suggested there were between 523 and 540 individuals,” Miquelle told Mongabay in an email. “However, survey methods were far from precise. We also know there are about 25 individuals living in northeast China.”

About 20 Amur tigers are thought to live in the Sikhote-Alin Biosphere Reserve itself, he added.

Amur tigers face a number of threats, including habitat degradation and the depletion of prey populations, but poaching is the most immediate threat, even though the species is nationally protected in both China and Russia, according to Miquelle.

“Tiger parts are highly valued for traditional Asian medicines, with demand primarily from Chinese, Vietnamese and Korean believers in the properties of tiger parts to heal a wide variety of ailments,” he said. “In Russia, it is mostly local poachers who kill tigers, and then sell them to middlemen, with most tiger parts eventually being exported out of Russia.”