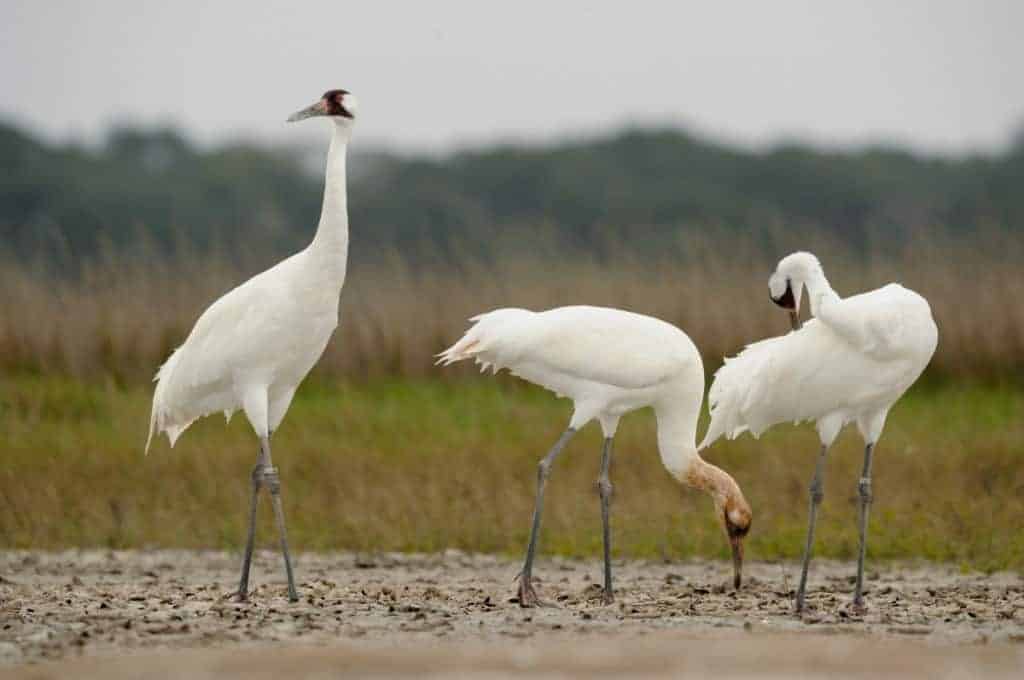 Raising its slim, white neck out of the waters of the Gulf of Mexico, one of the world’s last surviving whooping cranes hungrily searches a Texas marsh for the blue crabs and berries it devours during its annual migration to the Gulf Coast.

The high-protein diet is supposed to sustain North America’s tallest bird through the winter and prepare it for the nesting season in Canada. But this year, the state’s devastating drought has made food and water scarce, raising worries that the parched conditions could threaten the only self-sustaining flock of cranes left in the wild.

The lack of rain has made estuaries and marshlands too salty for blue crabs to thrive and destroyed a usually plentiful supply of wolf berries. In addition, a long-lasting “red tide” — a toxic algae that blooms in salty water — has made it dangerous for the birds to eat clams, which retain the algae’s toxin and can pass it along the food chain.

“We’re very apprehensive, very concerned, monitoring the population very closely to see what it is the reaction might be,” said Dan Alonso, manager of the Aransas National Wildlife Refuge, the winter home of about half of the 300 cranes in the flock.

In 2009, when Texas last suffered a severe drought, an estimated 23 whooping cranes died between November and March, when they typically head north to nest in Canada’s Wood Buffalo National Park. Tests indicated some had contracted rare diseases and were undernourished. Scientists believe some died of starvation.

This year, at least one crane has already died, Alonso said.

Scientists are alarmed because they don’t normally see dead birds so early in the season. Usually, only 1 percent — or about three birds — die over the winter.

“I think we’re going to lose a bunch again this year,” said Tommy Moore, captain of a skimmer boat that takes tourists and bird lovers to view the cranes in Texas’ shallow wetlands.

“The only thing I’ve seen them eat, period, is dead fish off the side of the channel … there’s just nothing here to eat,” said Moore, who observes the birds nearly every day.

A century ago, the whooping cranes’ majestic 5-foot frame and mournful call were common across the Texas shoreline and as far away as the East and West coasts. But by the 1940s, the pesticide DDT and disappearing habitat decimated the population, leaving only 14 birds in the whole country.

The eventual ban of DDT and efforts by scientists and Gulf Coast residents who view the cranes as a part of the tranquil landscape helped rebuild a small population.

In addition to the Texas flock, a smaller group cared for by conservationists migrates between Wisconsin and Florida by following an ultralight aircraft. The birds are trained to think of the aircraft as their mother.

There have also been attempts to rebuild the population in Louisiana.

Eventually, Alonso said, scientists hope to grow the population to 1,000 nesting birds and then list the species as threatened — a more secure status than endangered.

Drought can have long-lasting effects on a species’ recovery. For example, if the birds don’t get enough protein during the winter months, more of them could die on the 2,500-mile journey back to their summer nesting grounds, said Lee Ann Linam, a wildlife biologist with the Texas Parks and Wildlife Department who grew up near the Aransas refuge and has spent most of her adult life working on the species’ recovery.

Unlike other birds, the cranes don’t stop to eat while flying back to Canada so the nutrition they get in Texas is especially important. In addition, Linam said, the high-protein diet is key to a successful nesting season. The cranes only produce one chick per season, so there is little room for failure.

Another concern is water. When the birds are in Texas, they normally survey a square-mile area on foot for crabs, berries, acorns, worms and insects. But if there is no water, they will fly to drink. That uses up precious energy and potentially makes it easier for predators to nab them.

“The whooping cranes don’t do as well when there are lower amounts of freshwater coming into the bay systems,” Linam said.

Still, scientists hesitate to interfere with the workings of nature. After the drought of 2009 caused some cranes to die, the refuge looked into raising blue crabs to feed the birds. But they quickly discovered that crabs are difficult to farm because they are cannibalistic. And it would cost some $2 a crab if they were successful — too expensive for a cash-strapped program.

So instead, the reserve has taken other steps to help, including trying to capture rain to replenish water holes, revitalizing windmills and burning hundreds of acres of refuge land to make it easier for cranes to forage.

“We need every bird,” Alonso said, to help the species recover.

This article was written and published by USA Today