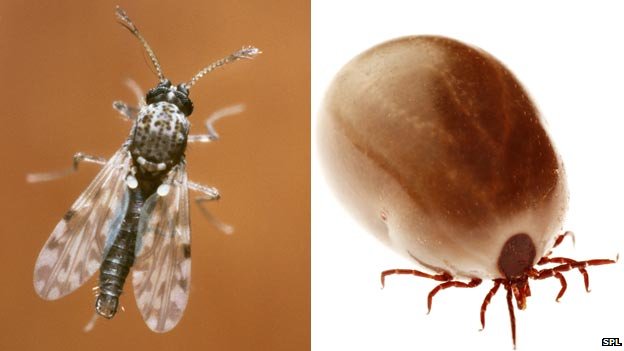 They are Scotland’s most notorious bloodsucking pests, but the Mountaineering Council of Scotland is highlighting the benefits of midges and ticks. Swatted, warded off with smelly repellent or twisted out with tweezers from where they have burrowed into skin, midges and ticks usually get short shrift by people they encounter.

Midge bites can cause irritating red itchy sores while those of ticks can result in serious, long-lasting medical problems. But to raise greater awareness of the health risks the latter can pose to human health, the Mountaineering Council of Scotland (MCofS) has explored the positive benefits of the tiny pests.

The pros include their importance as a food source for wild birds. Heather Morning, mountain safety advisor at the MCofS, said there was a serious message behind compiling the list.

Ms Morning said: “Tick bites are linked to an alarming rise in cases of Lyme disease, which can have serious long-term effects on people’s lives.” The disease is a bacterial infection that is spread to humans by infected ticks.

Flu-like symptoms and fatigue are often the first noticeable signs of infection. Diagnosed cases of Lyme disease can be treated with antibiotics, but if left untreated neurological problems and joint pain can develop months or years later.

Earlier this year, a group called Worldwide Lyme Protest UK urged for more medical professionals to be given the skills to diagnose and treat the infection. Nicola Seal, from Aberdeen, who co-ordinated a protest in May, said it was poorly understood, leaving thousands of patients without the appropriate treatment.

Official estimates put the number of new UK cases each year at around 3,000, but Lyme disease charities say the figure could be as high as 15,000 annually because so many people do not have their condition diagnosed.

Tourists put off returning to Scotland after being repeatedly bitten by the tiny biting midge are estimated to cost the tourism industry £286m a year, according to expert Dr Alison Blackwell. In 2009, two men cycling from Land’s End to John O’Groats in their underwear for charity were badly bitten by midges shortly after reaching the Highlands.

Adam Dunn and Gavin Topley, from Branksome, near Bournemouth, had taken no other clothes, money, food or insect repellent for their journey.They relied on offers of free accommodation and meals.

Also in 2009 a woman on Skye told how she was using midges as a key ingredient in food for wild birds. Elaine Bunce added the biting insect to beef dripping and flour to create her Original Highland Midge Bites.

She advertised in a local newspaper for people to send her expired insects collected from midge killing machines, as it takes a thousand for each ball.

This article was written and published by BBC News